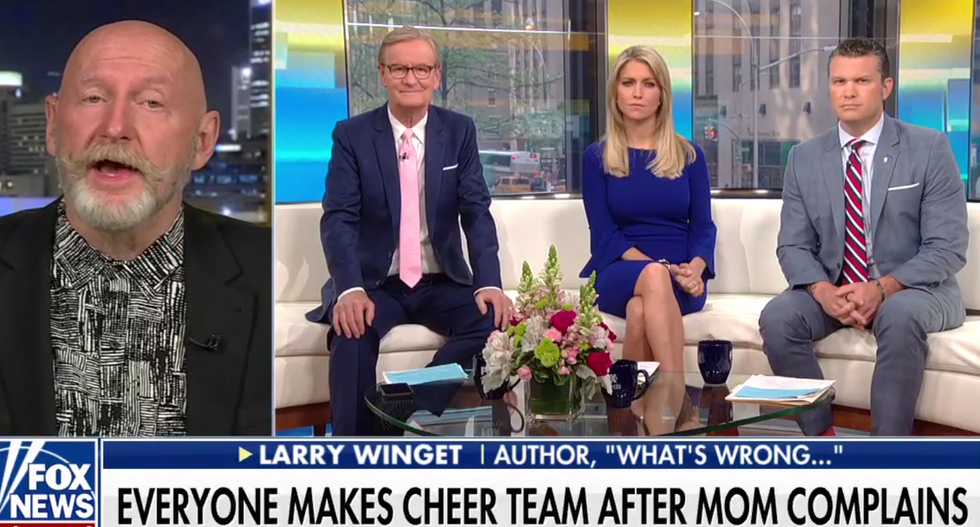 In its segment “Trouble with schools,” Fox & Friends presented an exclusive report on the situation unfolding at Hanover Park Regional High School, where school officials apparently created a new policy that offers a spot to anyone who tried out for the cheer team.

“Either everyone makes the cheerleading squad or no one does, that’s the new rule coming out of a New Jersey high school after a mother complained when her daughter didn’t make the cut,” co-host Ainsley Earhardt began. “But this is not sitting well with other members of the squad.”

The show then cut to sobbing high school student Stephanie Krueger, who complained that her hard work was “all going away” and “has been thrown out the window” with this new policy, a claim guest host Pete Hegseth described as a “great point.”

Hegseth then brought on Winget to explain why the ordeal is “so troubling on so many levels.”

“Stuff like this is what’s wrong with everything,” Winget said. “The school system is teaching parents that if you complain—if one mama says, ‘My sweet baby didn’t make the cheerleading squad,’ whether she deserved to or not—they will change school policy.”

Winget wondered what happens if policies like this transfer to grades or, worse, "driver’s licenses.”

Winget offered insight into that dystopian world: “You can’t drive and you ran into a car parked on the side of the road, but that don’t matter, I’m going to complain so that my baby gets her driver’s license whether she can drive or not.”

The “professional motivational speaker” then wondered what “lesson” the move is sending to the kids (presumably besides the obvious one, namely, “inclusion"). Winget argued that Krueger, the high school student who sobbed over the change, was “exactly right” to be concerned about her hard work.

Hegseth then offered to put it in the “context of sports,” noting that when people try out for “sports” teams, they make either the varsity team or the junior varsity team.

Appearing to make an argument against JV teams, Hegseth said, “in every one of those moments, you so, ‘no we’re inclusive, everyone plays’” then wondered what that says “about our culture” and the “erosion of actual merit” in it.