Ali Velshi explains Trump's 'culture of lying' to Canadian crowd: 'It's how Germany worked before the war' 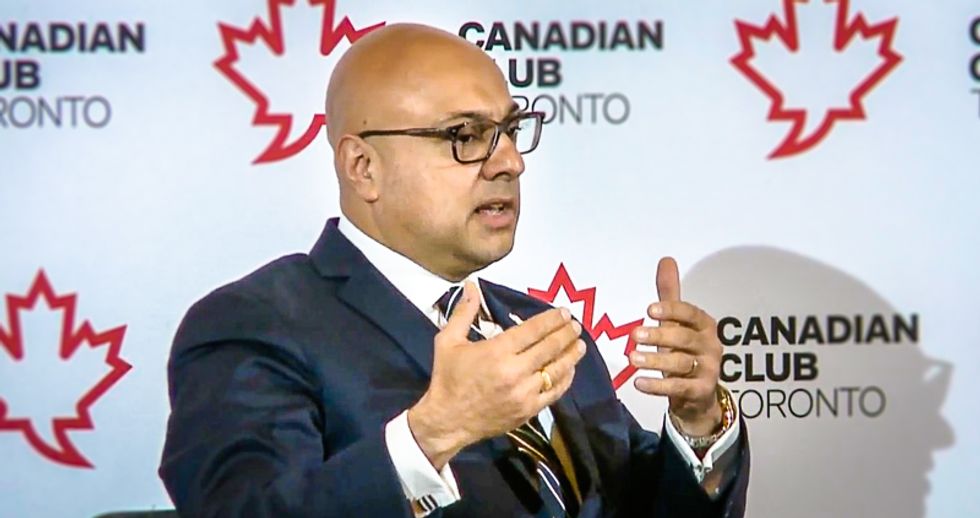 MSNBC host Ali Velshi on Monday told a crowd of Canadians that President Donald Trump is a "serial liar" who has changed the culture of the United States.

During an interview with the Canadian Club of Toronto, Velshi lamented the rise of "fake news" and predicted that artificial intelligence (AI) will eventually help inform news consumers about the veracity of media sources.

"I'm starting to see identity politics in a more complicated fashion," Velshi said. "When we weaponize that, when take that, put a label on it that says culture and create voting blocks out of it that are more to defend you at the expense of your fellow citizens then we're not engaging in citizenry the way we're supposed to. At some point, we've got to be able to balance your interests and societies' interests."

Velshi pointed out that the U.S. primary system has created a dynamic where "wilder and wilder people" are running for office and winning.

"Donald Trump has been walking around with a swagger the past few weeks," the MSNBC host opined. "He's now running the show. He's reported to have said how much he's enjoying this. This is now the guy he wants to be."

"But ultimately, something needs to check Donald Trump's swagger," he added. "And that's not about Donald Trump. It's about politics in general. Something always has to check a leader's swagger."

Velshi noted that Trump's lies were different than those of previous presidents because of the speed and frequency at which they occur.

"I don't know anything more about the Russia investigation than you do, but I'm fascinated by the number of people who are being caught for lying," he remarked. "I don't understand how everybody forgot that they met with the ambassador and the Russian this and the guy that flew to the Seychelles and met with the Russians. Like, how do you forget all this stuff?"

Velshi connected the culture of lying in the U.S. to similar events around the world.

"It's how Germany worked before the war, it's how Rwanda worked -- it was all misinformation spread by radio," he stated. "In fact, if you look at most totalitarian experiences and dictatorships and catastrophes and genocides, it was all based on lies that were spread and propaganda that was spread."

"That's not supposed to happen in a democracy," Velshi said. "That's the weird part, that it's happening in America."