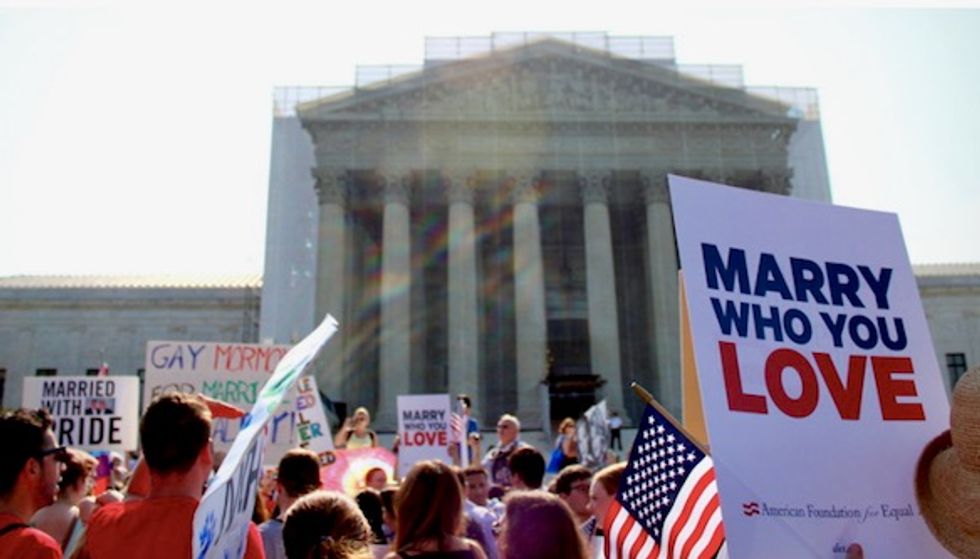 California's Prop 8, a 2008 neanderthal voter-supported ballot initiative that temporarily yet effectively ended marriage for same-sex couples will go into effect again some day soon. That claim was made Friday in a fundraising email by Brian Brown, the president of the National Organization For Marriage (NOM), an anti-gay group that spent millions of dollars, unsuccessfully, to end the right of same-sex couples to marry.

Despite the U.S. Supreme Court's 2015 ruling in Obergefell that finds same-sex couples have the constitutional right to marry, Brown insists the laws on the books in California and other states banning marriage equality will go back into effect when another conservative justice is appointed the there nation's highest court.

"The only thing that has happened to Prop 8 and all the other pro-marriage laws in states around the country is that they are not being enforced because of the illegitimate, anti-constitutional ruling by the US Supreme Court in the Obergefell case imposing gay 'marriage' on the nation," Brown insists in a fundraising email.

"While it may be inconvenient for the Left, the fact is that Proposition 8 in California and the laws in dozens of other states remain on the books and will come back to life when the Obergefell case is eventually overturned, which it clearly should be and we believe will be, perhaps sooner than people imagine," he wishfully claims.

"We are just one vote shy of having a pro-marriage majority on the US Supreme Court. If Anthony Kennedy decides to retire this year as many expect, we will have a realistic chance to promote a pro-marriage nominee from President Trump in the mold of Antonin Scalia and Neil Gorsuch."

Brown insists supporters should send NOM money because they are "also fighting for the truth of gender."