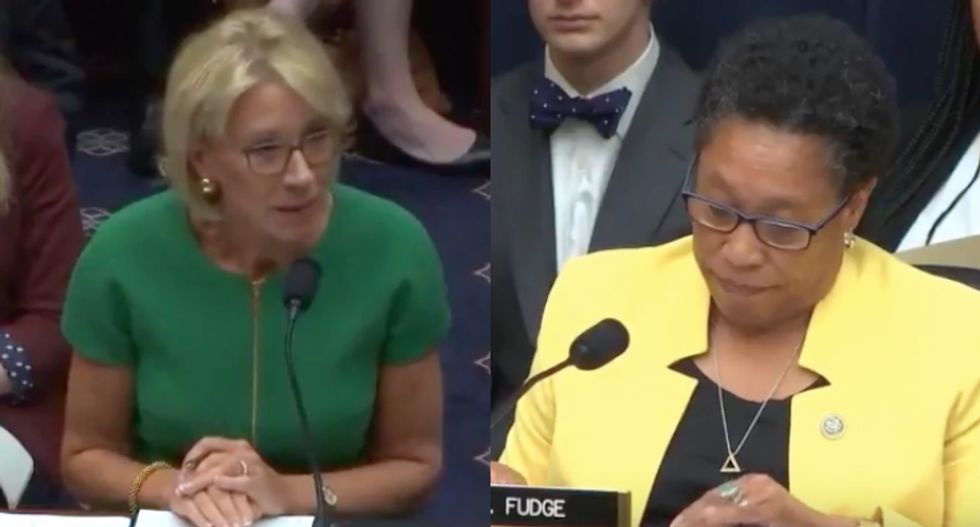 A black congresswoman appeared visibly annoyed as she questioned Education Secretary Betsy DeVos about the DOE's civil rights policies and was met with responses suggesting the secretary is uninformed on the rights of students.

"The office for civil rights is committed to protecting the civil rights as determined under the law of this land," the education secretary responded, "and we do so proudly and with great focus each day."

"That's not the mission statement," the Ohio congresswoman said. "Do you know what it is?"

DeVos said she had "not memorized" the Education Department's Office of Civil Rights mission statement, to which Fudge shook her hand and said "that's ok," appearing exasperated. She asked the secretary to explain her understanding of "vigorous enforcement" of civil rights in schools.

"It would be following the law and enforcing the law as stated," DeVos responded, to which Fudge simply sighed and said "OK."

'Everything should be returned at once!' Trump snaps at DOJ over latest Mar-a-Lago document setback

Former president Donald Trump kicked off his Friday morning by lashing out at the Department of Justice over the government documents the FBI was compelled to confiscate from his Mar-a-Lago resort that has led to an investigation over obstruction of justice and possible violations of the Espionage Act.

Last week the 11th Circuit Court of Appeals unanimously ordered the special master review of the stolen documents be shut down, with CBS now reporting, "The outside review of documents seized by the FBI from former President Donald Trump's Florida resort will officially come to a close, as a ruling from a federal appeals court panel ordering its end took effect Thursday without an appeal from Trump," and then adding, "Late Thursday afternoon, the 11th Circuit's clerk sent a letter to the federal district court in Miami noting that the mandate had taken effect, capping the monthslong legal battle stemming from Trump's request for the special master to vet the records."