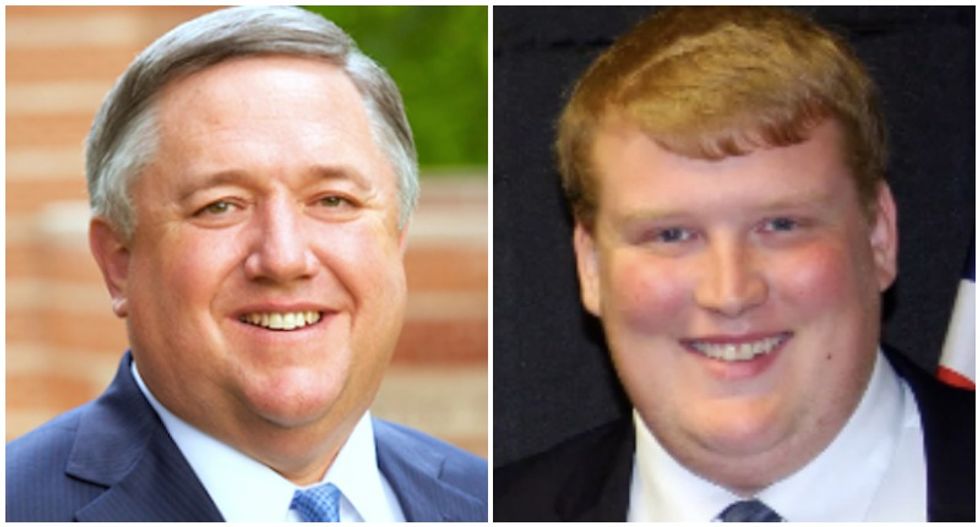 A Christian university president was accused of covering up his son's sexist and racist abuse -- and retaliating against one of his accusers.

Mark Smith and his son, Doug Smith, were each named along with senior staffers at Ohio Christian University in two federal lawsuits alleging workplace harassment and wrongful termination, reported the Island Packet.

The elder Smith, whose OCU contract ran through 2025, resigned in January 2017 and was hired a month later by Columbia International University in South Carolina, which also hired his son.

One suit, filed by former OCU student Cynthia Dove, claims Doug Smith started to stick his finger in her mouth while they worked together on the information technology help desk.

"That was a slut test," Smith said. "If they close their mouth, they’re a slut."

The other lawsuit, filed by former OCU lead attorney Jeremy Davitz, backed Dove's claims and claimed Doug Smith secretly took photos of a co-worker's buttocks and posted it on social media with the caption, "this is why we hire women."

Doug Smith also told co-workers he hated LGBT people and other minority groups, saying black people were "entitled" and Mexicans were "dirty freeloaders" -- and he insisted he was "dead serious" about his beliefs.

"Stop being such a Jew," he told Dove when she dropped a ladder, and he added that he didn't care that she was offended.

Dove's lawsuit claims the university president's son was "a favored employee, despite his poor work performance and work ethic," and she was transferred to another department after complaining about him.

"Although Mr. Smith’s coworkers complained about his behavior, he was never disciplined for his behavior and, as a result, Mr. Smith’s inappropriate work behavior continued," the suit says.

Davitz said he reported the claims to Mark Smith in spring 2016 and advised him to fire his own son, but the attorney claims the university president pounded his fists on the desk and threatened to sue him and the university.

"Mark Smith yelled that he, himself, was a victim and that his son was a victim who had gone through tremendous hardships," the suit claims.

The attorney said Mark Smith then stripped him of his responsibilities, telling trustees "we don't trust him anymore," and fired him in January 2017.

CIU insists a full background and reference check were conducted on both Smiths before hiring them, and Doug Smith's attorney said the OCU lawsuit "has been resolved" -- although both Dove's claim or Davitz's remain active.