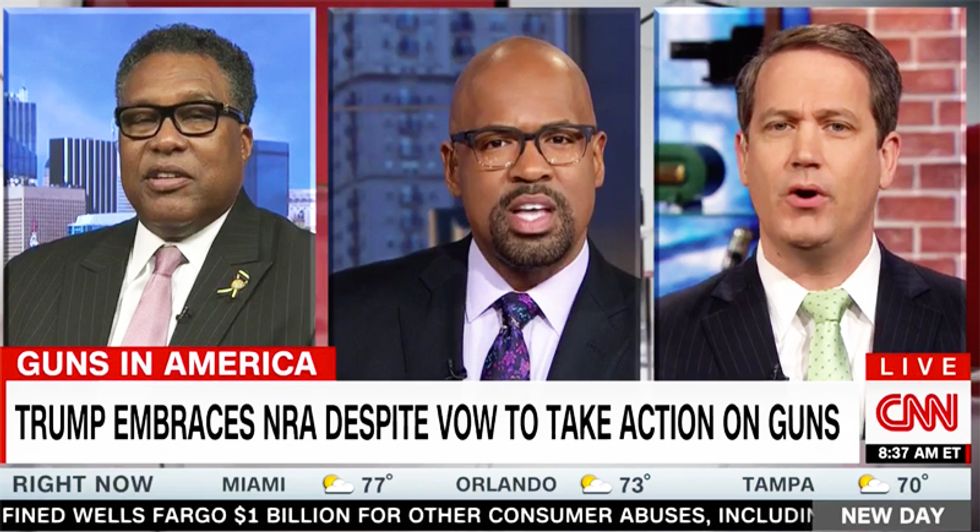 In a fairly contentious panel discussion on CNN's New Day, the mayor pro tem of Dallas battled with a Georgia state senator who has gone all in with the NRA dismissed gun safety as a priority for the organization.

Appearing with host Victor Blackwell, Dallas Mayor Pro Tem Dwaine Caraway first explained why he didn't want to the NRA to hold their convention in his city, calling the organization "arrogant."

He then engaged Georgia State Senator Michael Williams (R)  in a spirited debate -- that spiraled into shouting -- over the goals of the NRA.

"Listen, we just buried a police officer here last week and we've got two in critical condition still in the hospital," Caraway explained. "ATF officer was just shot in Chicago yesterday. The kids at Parkland and all over the shootings that we've had. We've got to be common sense and put on our brains, be tough enough elected officials to say get your [the NRA] behinds to the table and let's figure out how these guns are getting into the wrong people's hands, and let's do something about it."

Asked to respond, Williams -- who is running for governor, -- pushed back at the Texas politician.

'Let me tell the mayor if he doesn't want the NRA in Dallas, Atlanta will gladly have them --we had them here," Williams said to which Caraway shot back, "You can have them."

"Atlanta was probably the safest we've ever been," Williams continued. "I was glad to have them. As far as gun control, I think that's the wrong issue. We don't need to be talking about gun safety or gun control because guns are inanimate objects. Guns don't kill people -- it's the people behind the guns. The comment that the NRA is out there promoting getting guns to everybody, that's not what they're doing. That's a mischaracterization of the NRA."

"We don't need to talk about gun safety?" host Blackwell blurted. "The NRA sells itself as a gun safety organization."

'That's really ridiculous, and here's the deal," the Dallas mayor shot back. "We are elected to set policy and to protect all citizens in America. I'm a Second Amendment believer, but today is a different day. 100 years ago or so when the Second Amendment was put into motion, there were muskets."

"That is an argument that may not rise to you  now if it's your son that gets shot by a gun, a weapon, what do you do?" Caraway asked. "Put yourself in that position and put yourself in the positions of those people that have lost their lives. Put yourself in a position of people that's trying to eat pancakes at the Waffle House and get shot over bacon and eggs. The schools and all of those things. You're saying we don't need to talk about gun safety? What state are you in?"