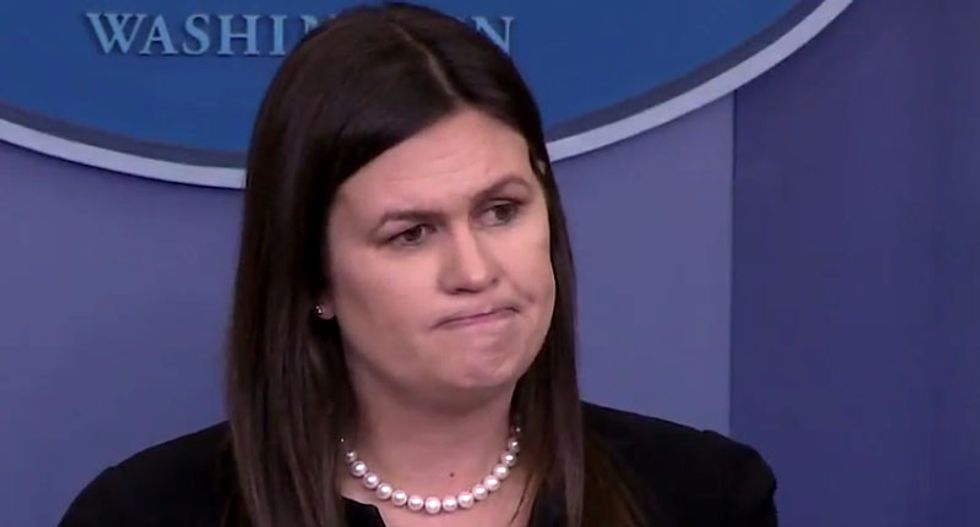 On Friday morning, CNN's  "New Day" panel took apart White House spokesperson Sarah Huckabee Sanders' disastrous Thursday afternoon press conference,  where the embattled press secretary dispiritedly swatted away questions about her credibility after it was pointed out to her that she had repeatedly lied to the press.

Sharing clips of Sanders repeatedly excusing her lies with "I gave the best information that I had at the time," the verdict came down: There is no reason to ever believe her.

Host Chris Cuomo began by pointing out that Sanders has a "bullseye painted on her right now."

"Their statements have been, at best, inconsistent , if not completely fabricated," Cuomo explained.

Former prosecutor Renato Mariotti was the first to jump into the fray.

"I'll tell you it is is certainly not convincing to me," Mariotti charged. "If I was a journalist listening to her every day, I wouldn't take her very seriously at this point. It seems to me that what she's doing is repeating whatever the president tells her, and at this point his credibility is pretty much shot."

"Frankly, you have to wonder at this point, you know, is what she says news?" he asked. "I suppose it's news just from the fact it's what the White House's line is. I don't know how we can take seriously anything she has to say."

"What else is she supposed to do? She was sticking to that line: 'I gave you the best information I had at the time.' That was probably true," co-host Alisyn Camerota said in Sanders' defense, before showing a clip of the White House spokesperson repeating her "best information" excuse six separate times.

"Press secretaries in the past held themselves to a higher standard," panelist John Avlon lectured. "They have threatened to resign when asked to present false information to the press -- because it is their credibility. Their job is to be the  point person to the press,  to be a mouthpiece for truth as well as the administration's interest."

"That line, she was holding onto like a lifeline," he continued. "It is not only plausibility deniability but a lot of times they know the information they get is not good. Here is the larger standard we need to keep in mind:  There is a quote from Edward R. Murrow that says to to be believable you have to be credible. To be credible you have to be truthful. That's the way that relationship works."

"The White House secretary depends on it, and that has been erased not only yesterday but for months," he added. "Tone comes from the top, and this president has a truth-telling problem."