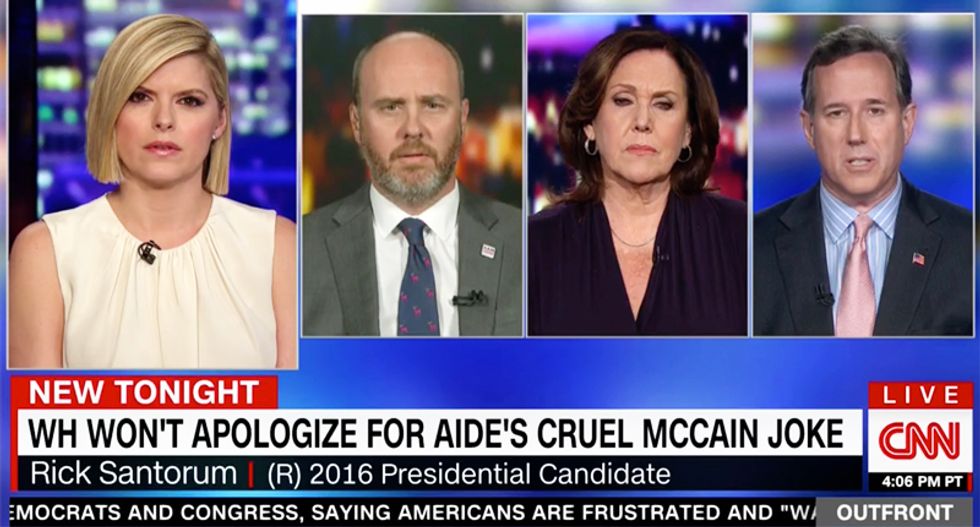 During a CNN panel discussion about the fate of  President Donald Trump aide Kelly Sadler --who made a grotesque joke about Arizona Sen. John McCain dying -- former GOP Senator Rick Santorum saved his rage for the White House leaker who exposed her, calling their actions "reprehensible."

After sharing a clip of McCain's daughter, Meghan, saying on The View, "I don't understand what kind of environment you're working in when that would be acceptable and then you can come to work the next day and still have a job," CNN's Kate Bolduan asked Santorum to weigh in.

"Do you think the staffer should be fired?" the CNN host bluntly asked.

"Obviously it was a rude and foul thing to say that we don't need in our public discourse," he continued. "Who is this leaker that supposedly works in the White House? That to me is equally atrocious."

"But senator, is it equal the fact the comment was said or the fact that someone leaked it out?" a baffled Bolduan asked. "You think those things are equally egregious?"

"Everyone's going to say, 'Oh, no one ever says anything foul or crude at internal meetings,'" Santorum protested. "It happens all the time, unfortunately. And it shouldn't but it does. and the reality is that the person who leaked it took something that was a private thing that would never have gotten out and put it out there in the public stage. and so yes, I think they are very, very culpable in this situation. They've added fuel to the fire."