Concerns over US court backlog grow with rising border prosecutions 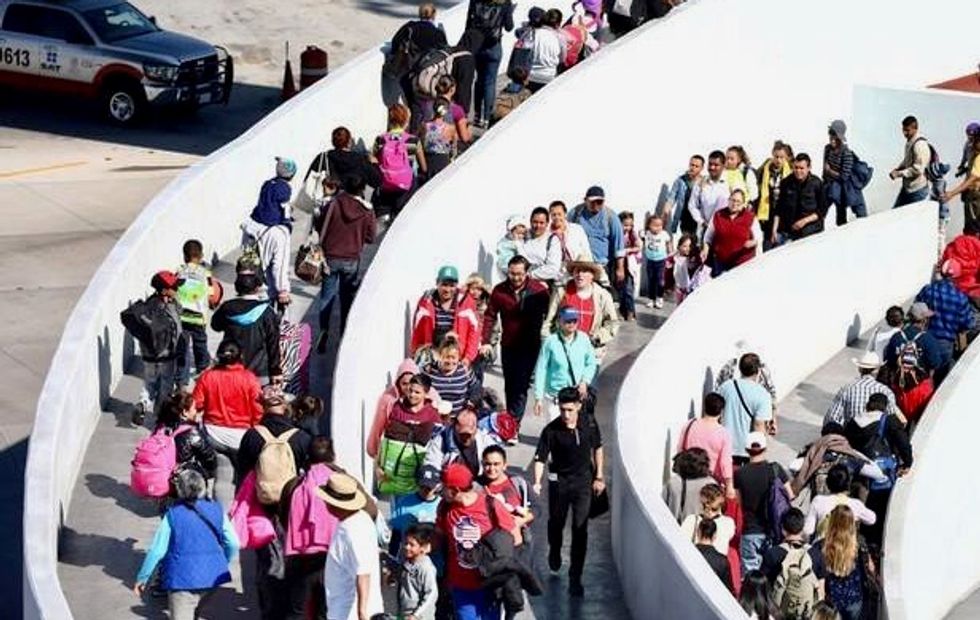 FILE PHOTO: Members of a caravan of migrants from Central America, enter the United States border and customs facility, where they are expected to apply for asylum, in Tijuana, Mexico May 4, 2018. REUTERS/Edgard Garrido/File Photo

At the height of President Barack Obama’s crackdown on illegal crossings from Mexico seven years ago, San Diego’s federal courts were so clogged that immigrants arrested near the border sometimes slept on the floor of border patrol stations for days before seeing a judge.

Now, with Attorney General Jeff Sessions’ vow to criminally prosecute all those caught entering the United States illegally, which he reiterated on Monday, some judges and attorneys worry the courts are headed toward similar backlogs.

In Arizona, U.S. Magistrate Judge Bernardo Velasco said courts are already processing about 75 immigration cases a day, which he said is their maximum capacity.

Sessions said the Justice Department will add 35 new prosecutors along the border to help ramp up prosecutions, which can include basic charges of crossing illegally or more serious charges like human smuggling. But prosecutors are just one element of the system.

Raner Collins, the Chief U.S. District Judge in Arizona, said that so far no additional resources have been provided for increased marshals, judges, court staff or defense lawyers to handle more cases.

“We haven’t decided to devote any more resources to it because we don’t have any more to devote to it,” he said.

Devin O’Malley, a spokesman for the Justice Department, said the agency “has been in touch with administrators of the federal judiciary in order to find practical solutions to an expected increase in prosecutions along the Southwest border.”

The Justice Department has left itself some wiggle-room on its zero-tolerance approach, saying it would be applied “to the extent practicable.”

President Donald Trump campaigned on a promise to curb illegal immigration, and border apprehensions dropped dramatically after he took office. In recent months, however, they have climbed up sharply. Trump recently declared the border “under siege” and vowed to take action.

In April 2018, nearly 51,000 people were apprehended at or near the southern border, up from about 16,000 in the same month a year earlier. During Obama’s second term, April apprehensions averaged about 50,000.

Government officials have the option of either quickly deporting those who cross the border illegally or prosecuting them and removing them after they serve their sentences, often brief terms in federal prison.

The strategy of trying more criminal prosecutions is not new.

President George W. Bush in 2005 announced Operation Streamline, a plan to charge most illegal crossers caught at certain points along the border. In response, federal immigration prosecutions more than doubled, from about 34,000 in 2005 to about 82,000 in 2008, according to a Reuters analysis of data from the Executive Offices for U.S. Attorneys.

Obama continued the program and immigration-related prosecutions stayed at record highs throughout his first term.

The surge in prosecutions during the Bush and Obama years strained resources throughout the system, according to former federal prosecutors and judges.

A 2011 court order from Judge Barry Moskowitz in the Southern District of California found the flood of cases led to backlogged courts and left immigrant defendants languishing in substandard facilities without access to “beds, hygiene products and adequate food.”

The Obama administration eventually reduced the number of criminal cases it brought, partly in response to complaints that resources were being diverted from more serious crimes and that courts were overburdened, according to former officials. By December of 2016, immigration prosecutions had fallen to a nine-year low.

Sessions promised a “renewed commitment” to criminal border prosecutions in April 2017, and in recent months the number of cases has begun to tick back up.

The Department of Homeland Security said Monday there have been about 30,000 prosecution referrals for illegal entry since the 2018 fiscal year began in October, up from 18,642 prosecutions during the entire 2017 fiscal year.

That is still a fraction of the number of border crossers apprehended. Since October, more than 211,000 people have been apprehended along the Southwest border, according to U.S. Customs and Border Patrol data.

But the new wave of cases is already leading to a detention crunch in Southern California, said Shereen Charlick, chief trial attorney for the federal public defenders in the region.

The U.S. Marshals, not immigration authorities, must detain people who are criminally charged, and they are transferring some to distant jails because of a space shortage, she said, making it difficult for lawyers to communicate with clients about their defense.

Lynzey Donahue a spokeswoman for the U.S. Marshals, said they are working “to ensure resources on the Southwest border are focused in a manner that allows uninterrupted execution of our mission.”

Judge Moskowitz is bracing for defendants to flood his court once again. In an April 30 email to federal defense lawyers reviewed by Reuters, he said the U.S. Attorney in San Diego expects to file 20 illegal entry cases each day beginning on May 7, a far higher number than last year.

“Obviously, this increase in case load will have an impact,” Moskowitz wrote.