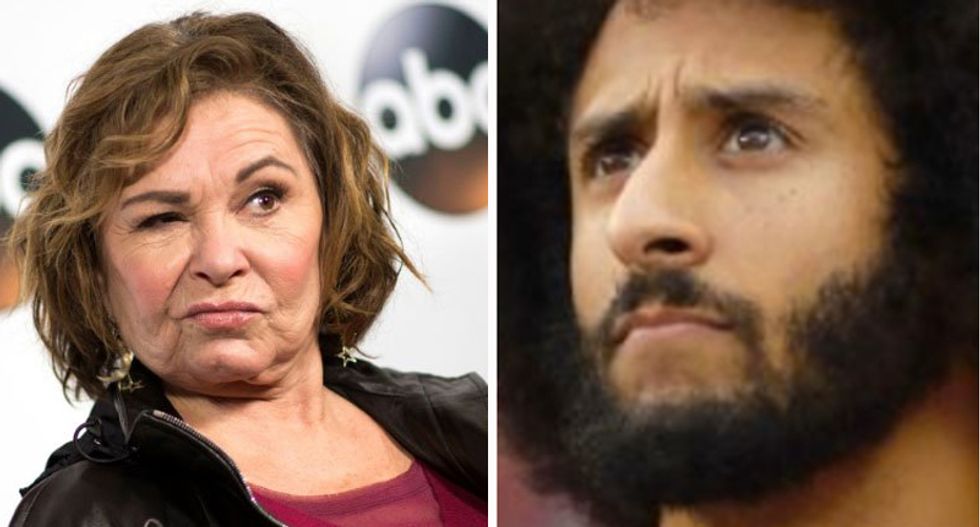 Writing in the Washington Post, conservative columnist David French took fired ABC television star Roseanne Barr to task for her racist comments  -- and then used the controversy to make the point that her rhetoric validates the kneeling protests initiated by former NFL quarterback Colin Kaepernick.

"In the last year, the two names that have most dominated debates about employee free speech are former Google employee James Damore and former professional quarterback Colin Kaepernick," French-- who regularly writes for National Review -- wrote. "Both men engaged in controversial on-the-job speech that contradicted stated corporate priorities and values: the National Football League wants its players to stand for the national anthem, Kaepernick knelt in protest."

"Democrats lined up for Kaepernick, and against an NFL cowed by President Trump’s view that railing against kneeling football players was a political winner for him, " French continued. "But shouldn’t there be an underlying principle, a standard that protects legitimate corporate interests while also protecting the culture of American free speech? Yes."

Which is where Roseanne Barr figured into French's equation.

"Thankfully for America, Roseanne Barr came along. Amid her vile, racist tweeting, she inadvertently showed the way through the free speech minefield: The standard we ought to apply is one of decency," he wrote.

"Barr’s Twitter attack on Valerie Jarrett, now deleted: 'muslim brotherhood & planet of the apes had a baby=vj,' possessed zero redemptive value to offset the corporate pain. It wasn’t thoughtful — it was one of the most undistilled versions of racism you’ll ever read. It offered no attempt to engage with public policy or cultural controversy — it was purely ad hominem," French lectured. "In other words, it was both unprofessional and indecent."

"Kaepernick’s protest occurred within the context of an intense, ongoing public dialogue regarding police treatment of African Americans, a debate that has haunted American politics for decades and has been ratcheted up in recent years, as viral videos have documented multiple fraught encounters between police and black citizens," he continued. "Reasonable people can disagree about the propriety of placing this issue in the middle of a football game. But the issue’s urgency can’t seriously be placed in doubt."

French then took on the impact of push-back at political speech.

"Which brings us to the modern temptation to politicize everything," he wrote. "If the mission of a corporation isn’t just to sell its product but also to advance its version of social justice or patriotism (or if the corporation’s version of social justice or patriotism is part of how it sells its product) then it’s easy to see the potential threat to free expression. Employees who embrace the corporate ideology enjoy a free rein while employees who dissent, no matter how thoughtfully, risk termination. Such a direct threat to individual livelihoods is far more threatening to free expression than the current power of government to censor disfavored speech."