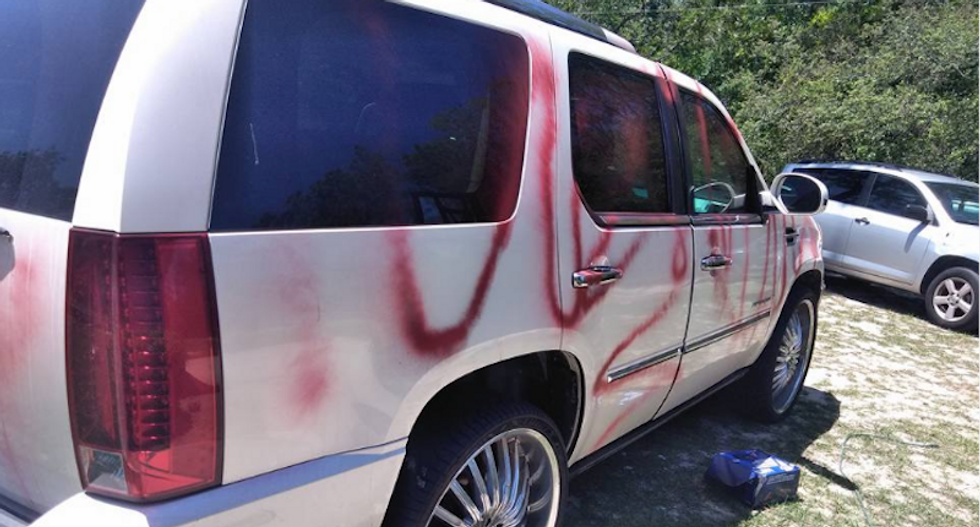 A black Florida child woke up over the weekend to find his family's home and property had been vandalized with racist graffiti.

Nakea Darisaw found racial slurs spray-painted all over her home, car and SUV, which caused thousands of dollars in damage and upset the Marion County woman's family, reported the Ocala Star-Banner.

The 40-year-old Darisaw told sheriff's deputies that her 16-year-old son heard their dogs barking overnight but didn't see anything suspicious outside, and her 6-year-old son discovered the vandalism early Saturday morning.

“It was unbelievably heartbreaking,” she said.

The vandals spray-painted "n*gga" and warnings to leave the area on both of Darisaw's vehicles and her family's Ocala home, garage and concrete porch.

Damage, which included broken windshields, was estimated at about $9,000.

"This is something I worked so hard for to give my kids, a safe environment," Darisaw said. "I thought they didn't have to worry about anything."

Darisaw said someone had also recently put sugar in the gas tanks of her Cadillac Escalade and Jaguar XJ and stolen their four-wheeler and pressure washer, and she said a fire was set in the woods behind their home last week.

Deputies are investigating the vandalism as felony criminal mischief, which could be enhanced to a hate crime, and Darisaw's community is helping her clean up the mess.

"Our church members came out and they used some solution and pressure-washed it to get all the writing, the racial slurs,” Darisaw said.

Darisaw said she doesn't have any enemies, and she and her family plan on staying in their home.

“I'm still going to stay in my house," she said. "I’m not going to be moving. No one is going to force me out of my house that I prayed for and sacrificed some many things to buy. I'm not going to move."