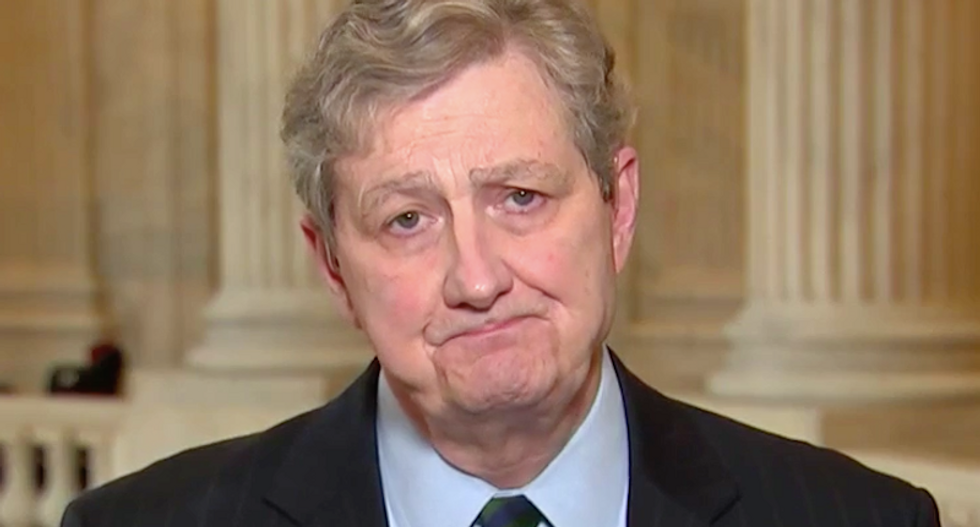 A Republican senator tried on MSNBC's "Morning Joe" to defend both President Donald Trump and special counsel Robert Mueller -- but he wasn't able to successfully perform either task.

Sen. John Kennedy (R-LA) called for Mueller to wrap up his probe into Trump campaign ties to Russia, but he also insisted he wanted the investigation to go wherever it leads.

"There's no doubt in my mind that the Russians did interfere in the 2016 election," he continued. "Now, did they determine the outcome of the election? I don't know how anybody can draw that conclusion, even with the facts."

The Louisiana Republican said he's tired of rumor and innuendo about the Mueller investigation, and he called on the special counsel to issue a report to end as soon as possible.

"Well, it comes down to character, Joe," Kennedy said. "If we have people in the upper echelon of the FBI or Justice Department (who) can't stand up to a president or senator --"

Scarborough cut him off, saying he was asking whether Trump was improperly trying to steer the investigation away from himself.

"I don't know and, really, nobody else does," Kennedy said. "You can draw conclusions from the objective evidence. I mean, the president tweets a lot."

The senator agreed with Scarborough that objective evidence existed to suggest Trump was trying to interfere with Mueller's probe, but he insisted the special counsel should be ready to present his findings by now.

Kennedy admitted he didn't know where the investigation stood, but the senator said he was tired of hearing about it.

"It's an important issue, but we've got a lot of other important issues, and this issue kind of just sucks all the oxygen out of the room," Kennedy said. "I mean, on some days that's all anybody wants to talk about up here, in the media and outside the media."