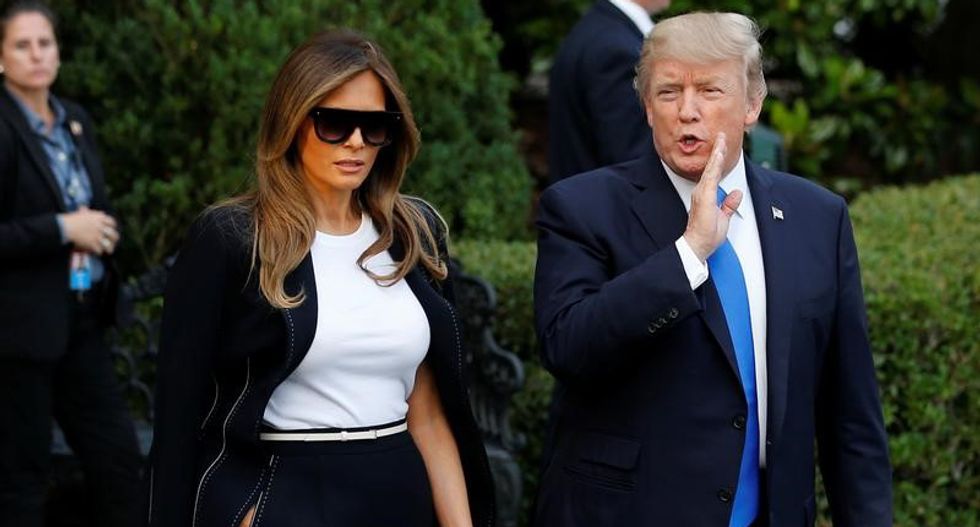 U.S. President Donald Trump and first lady Melania Trump in Washington, U.S. July 12, 2017. REUTERS/Jonathan Ernst
In her new book, "Chasing Hillary," New York Times reporter Amy Chozick admits that she and other mainstream media reporters were duped by foreign propaganda. In a chapter titled “How I Became an Unwitting Agent of Russian Intelligence,” Chozick confesses that she and her Times colleagues allowed the need for attention — and clicks — to guide their decision to forefront largely unimportant information obtained from email hacks of Hillary Clinton's staff. Those leaks were likely the work of Russian agents, who fed the information to the newspaper (by way of Julian Assange and WikiLeaks) in order to feed a false narrative that Clinton was duplicitous and untrustworthy.“[N]othing hurt worse than my own colleagues calling me a de facto instrument of Russian intelligence," she wrote. "The worst part was they were right.”

Perhaps after failing democracy in the worst way, you might think staff at the New York Times had learned their lesson. This week there's reason to be worried that they didn't — and not because of reporter Maggie Haberman's feigned umbrage over the White House Correspondents' Dinner, in an apparent effort to ingratiate herself with White House press secretary Sarah Huckabee Sanders. (As bad as that was.) The real concern is that the Times is getting played by the Trump administration in almost the same way it got played by the Russians, which suggests the Gray Lady's staffers are still allowing the desire for breaking news to trump their civic duty.

At issue is a recent story from Michael Schmidt about a list of questions that Justice Department special counsel Robert Mueller reportedly wants to ask Trump, many of them focused on questions of possible collusion with Russian agents or attempts to obstruct justice. The story isn't all that surprising in itself, but it nonetheless has that frisson of intrigue guaranteed to drive traffic: Secret documents obtained from anonymous sources, the suggestion that the Russia investigation is on the verge of a breakthrough, a hint that the president himself may soon be in the hot seat. As I write this on Tuesday evening, the story has been at the top of the Times homepage for nearly a full day, and became the basis for a dramatic episode of the popular podcast "The Daily."

But there are plenty of visible hints that the Times may be being used by the Trump administration for propaganda purposes. While Schmidt is being tight-lipped about who gave him the list of questions — he denies getting it directly from Trump's lawyers directly — there's good reason to believe the leak came from someone close to the president. As Schmidt indicates, the list of questions came out of a meeting between Mueller's team and Trump's lawyers, who are continuing to negotiate over Mueller's desire to interview the president. It's unlikely that Mueller or his investigators are the leakers — the special counsel's office is notoriously tight-lipped — and Trump's associates are the only realistic alternative source.

As soon as the Times story appeared, Trump and his cronies snapped into action, publicly rending their garments and lamenting the evils of the leak — a leak that almost certainly came from someone on Team Trump. Sean Hannity, who speaks to Trump in private on the regular, appeared on Fox News shortly thereafter to say, "These New York Times questions, you could use it to burn in your fireplace tonight."

To no one's surprise, Trump was on Twitter first thing on Tuesday morning, stoking outrage about leaks whose source, to speculate just a little, was almost certainly not a mystery.

The whole thing may seem bizarre at first blush. Why would Trump and his lawyers leak a story and then run around publicly pretending that Trump is the victim of an unfair and outrageous leak? If that's what they're doing, it actually makes a dark sort of sense. Trump benefits both from increasing the noise and confusion around the Russia investigation and from stoking the narrative that he's the victim of some kind of conspiracy involving the "deep state" and the "fake news" media.

Leaking a story and then acting like a victim of the leak seems like exactly the kind of plot Trump and his crew would hatch to advance their narratives. The thing to remember is that Trump has a long history of manipulating journalists, and of planting stories in the press while pretending they don't come from him.

In the 1970s, '80s, and '90s, Trump would frequently pretend to be other people while speaking to journalists, trying to trick reporters into giving him favorable coverage. He did this to get tabloids to portray him as a sexually dynamic heartbreaker. He did it trying to convince journalists that women who wouldn't deign to speak to him were secretly having sex with him. He did it to deflect negative coverage about destroying a priceless work of art he had promised the city he would preserve.

As Jonathan Greenberg detailed in a recent Washington Post article, he had many interactions with Trump as a reporter for Forbes in the '80s. Trump employed a whole range of complicated and subversive tactics to convince the magazine to list him as one of the wealthiest men in America, which he almost certainly was not. Trump would pretend to be a third party named "John Barron" or would have his lawyer, the infamous Roy Cohn, claim to have documents proving this claim — documents he would then refuse to share.

In other words, there's a long pattern here of Donald Trump deliberately playing games with journalists to blow his own horn and spread his flimsy, self-glorifying propaganda. In the past, he did this because he yearned to be depicted as a billionaire playboy rather than a small-time real estate developer with a string of business failures. It's not unreasonable to suspect that he is doing much the same thing now, in an effort to kick up dust around the Russia investigation and create the illusion that he's the victim of some conspiracy of leakers. I'm not the only journalist who is suspicious. Sam Stein of the Daily Beast is also skeptical:

Trump's behavior since his inauguration suggests that he has no interest in messaging to a broad audience. He's only interested in signaling to his rabid base of support, to keep their loyalty locked down. This hypothetical strategy may be totally ineffective on the public in general, but it bolsters the Trump-friendly narrative that Mueller's team is shady and untrustworthy -- and therefore that none of their conclusions can be trusted.

So the question now rests with the New York Times. If, as I suspect, these leaks really came from Trump's people, then Times reporters must be alert to the possibility that they're being used as instruments of Trumpian propaganda, just as they were previously used as instruments of Russian propaganda. Protecting sources is sometimes important, if those sources are genuine whistleblowers who fear retaliation. But if this is a case of the president's men using the press as a weapon to sow confusion and misinformation, then the journalists at the paper of record need to stop chasing clicks and pay attention to their duty to democracy.