ICE agents refuse to show Latino mother their warrant as they raid her home: 'You watch too much movies' 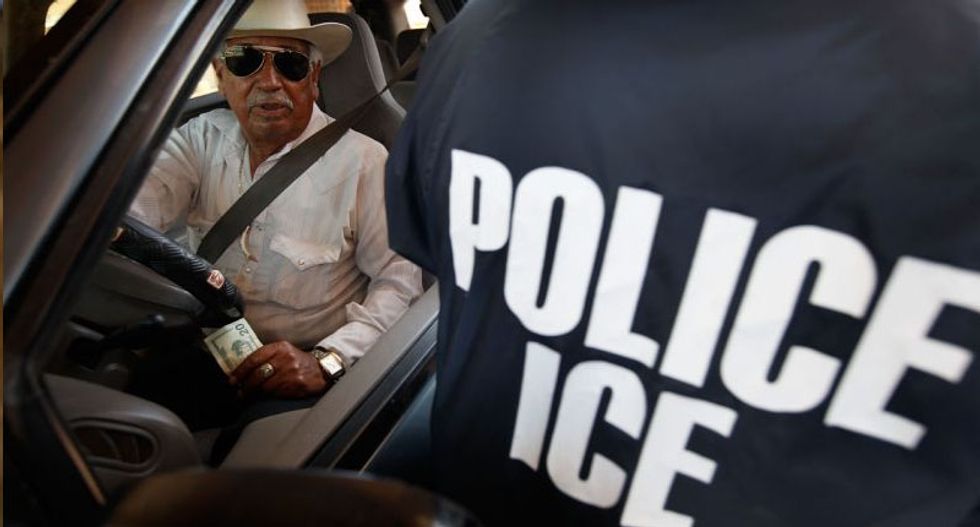 A special agent from Immigration and Customs Enforcement (ICE) searches a vehicle heading into Mexico at the Hidalgo border crossing on May 28, 2010 in Hidalgo, Texas (AFP Photo/Scott Olson)

In a video that's gone viral, immigration officers refuse to show a Latino woman their warrant and mock her for asking to see it as they pry open the door to her house and arrest her husband.

NBC 7 San Diego reported that Immigration and Customs Enforcement agents initially used microphones to urge Brianna Alonso's undocumented husband, 31-year-old Alberto Alonso Hernández, to come outside of the house. When he did not comply, the agents allegedly cut the house's electricity before prying the door open.

"You’ve been watching too much movies," one of the agents is heard telling Alonso after she asked him to show their warrant. ""We will show you the order once we finish."

In the video, ICE agents are seen using a crowbar to open the door to the house containing five children — and once they get it open, they burst into the house with a riot shield that has the word "police" emblazoned on it.

In a statement to NBC 7, ICE said the situation was "complicated" due to Hernández's past history of deportations and criminal arrests, and that neighbors who also filmed the confrontation made it worse.

The report noted that the ACLU of Southern California advises people to not open their door and ask to see a warrant when ICE comes to their home.

You can watch Alonso's video and another recorded by her neighbor below: