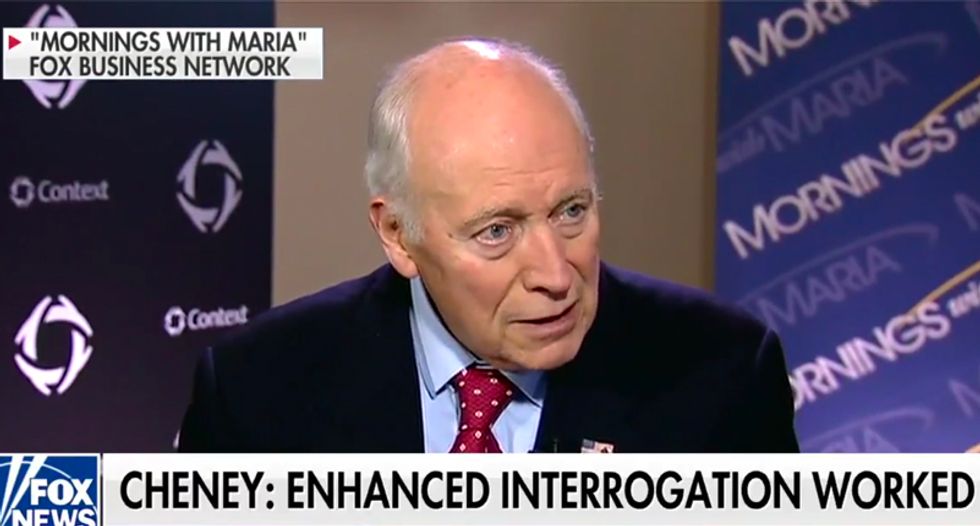 Appearing on Fox News with host Maria Bartiromo, former Vice President Dick Cheney said he disagrees with the international community that calls waterboarding prisoners "torture," and said he would advocate for it once again if asked.

In a taped interview with the Fox host, Cheney applauded the nomination of Gina Haspel to head the CIA while admitting that he didn't know her personally, despite the fact that she helped oversee the black ops program that interrogated prisoners after the 9/11 attack.

That was when Bartiromo asked the vice president who served under former President George W. Bush about torture.

"We have had 17 years to digest what happened after 9/11, and, of course, much has been made about the torture programs and the interrogation programs," the Fox host suggested. "You've been vocal about this, that at the time you said this was the right thing to do. Correct?"

"I've been very vocal about it, I believed in it, I was heavily involved in getting it set up," Cheney admitted. "I'm not one of those persons who calls it torture, an awful lot of people do. But it wasn't and it was set up in a way that was consistent with our fundamental statutes and agreements that were in place -- and it worked."

Pointing out that "waterboarding was applied to only three individuals," Cheney stated that the CIA later produced a study saying one of those tortured was a "preeminent source on al Qaeda."

"I supported it [waterboarding] and I do to this day and I'm prepared to defend it, debate it and argue it," he confessed, before later adding he "would do it again."

According to the Washington Post, a study the Senate Intelligence Committee concluded that "the CIA’s use of torture and other harsh interrogation techniques did not produce unique, critical intelligence that had not been replicated elsewhere or obtained through other means."

You can watch the video below via Fox News: