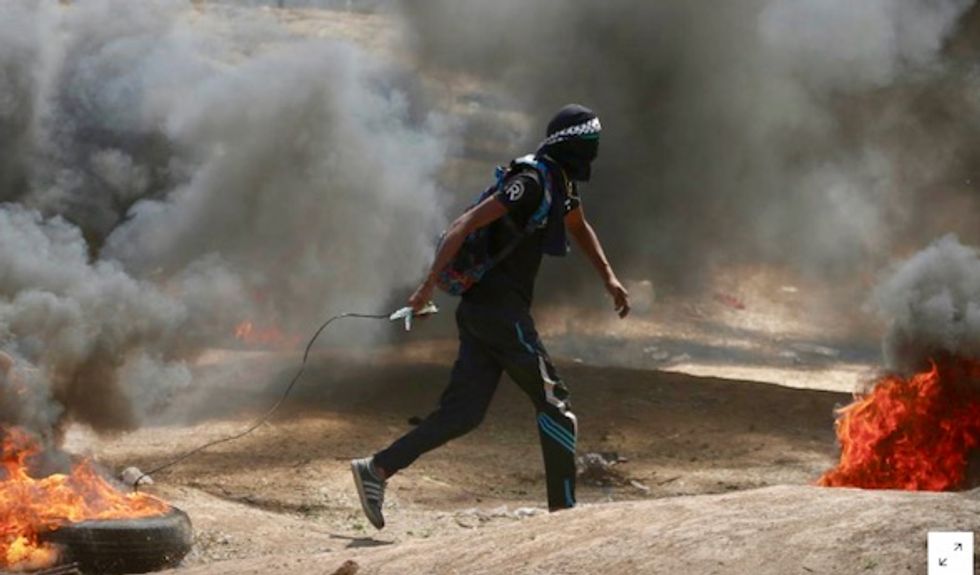 A Palestinian demonstrator drags a burning tire during a protest against U.S. embassy move to Jerusalem and ahead of the 70th anniversary of Nakba, at the Israel-Gaza border, east of Gaza City May 14, 2018. REUTERS/Mohammed Salem

Israeli forces killed at least 28 Palestinians along the Gaza border on Monday, health officials said, as demonstrators streamed to the frontier on the day the United States prepared to open its embassy in Jerusalem.

It was the highest Palestinian single-day death toll since a series of protests dubbed the “Great March of Return” began at the border with Israel on March 30 and since a 2014 Gaza war.

The health officials said 900 Palestinians were wounded, about 450 of them by live bullets.

Tens of thousands gathered at the frontier on Monday, some of them approaching Israel’s border fence - a line Israeli leaders vowed Palestinians would not be allowed to breach. Black smoke from tyres set alight by demonstrators rose in the air.

“Today is the big day when we will cross the fence and tell Israel and the world we will not accept being occupied forever,” said Gaza science teacher Ali, who declined to give his last name.

“Many may get martyred today, so many, but the world will hear our message. Occupation must end,” he said.

Later in the day, Israeli leaders and a U.S. delegation including Treasury Secretary Steven Mnuchin and President Donald Trump’s daughter and son-in-law, Ivanka Trump and Jared Kushner, were due to attend the opening of the embassy relocated from Tel Aviv to Jerusalem.

“A great day for Israel,” the U.S. president, who stoked Arab anger by recognizing Jerusalem as Israel’s capital in December, said in a tweet.

Prime Minister Benjamin Netanyahu, in lockstep with Trump over fulfilling a long-standing U.S. promise to move the embassy to the holy city and over the president’s withdrawal from the Iran nuclear deal last week, echoed the sentiment.

“What a moving day for the people of Israel and the State of Israel,” Netanyahu wrote on Twitter.

The 28 Palestinian dead on Monday included a 14-year-old boy, a medic and a man in a wheelchair who had been pictured on social media using a slingshot.

The Israeli military identified three of those killed as armed militants whom it said tried to place explosives near the fence in the southern Gaza Strip.

The latest casualties raised the Palestinian death toll to 73 since the protests started six weeks ago. No Israeli casualties have been reported.

“The IDF (Israel Defense Forces) will act forcefully against any terrorist activity and will operate to prevent attacks against Israelis,” the military said in a statement.

The killings have drawn international criticism, but the United States has echoed Israel in accusing Gaza’s ruling Hamas movement of instigating violence, an allegation it denies.

Jason Greenblatt, Trump’s Middle East peace envoy, said on Twitter that “taking the long-overdue step of moving our Embassy is not a departure from our strong commitment to facilitate a lasting peace deal. Rather, it is a necessary condition for it.”

The Palestinians, who want their own future state with its capital in East Jerusalem, have been outraged by Trump’s shift from previous administrations’ preference for keeping the U.S. Embassy in Tel Aviv pending progress in peace efforts.

Those talks have been frozen since 2014. Other international powers worry that the U.S. move could also inflame Palestinian unrest in the occupied West Bank, which Israel captured along with East Jerusalem in the 1967 Middle East war.

The protests are scheduled to culminate on Tuesday, the day Palestinians mourn as the “Nakba” or “Catastrophe” when, in 1948, hundreds of thousands of them were driven out of their homes or fled the fighting around Israel’s creation.

“Choosing a tragic day in Palestinian history (to open the Jerusalem embassy) shows great insensibility and disrespect for the core principles of the peace process,” Hamdallah wrote.

Most countries say the status of Jerusalem - a sacred city to Jews, Muslims and Christians - should be determined in a final peace settlement and that moving their embassies now would prejudge any such deal.

But Guatemala, which received support from Israel in its counter-insurgency campaigns in the 1980s, plans to open an embassy in Jerusalem on Wednesday. Its ambassador visited the new site, in an office building in the western part of the city, on Monday. Paraguay is to follow suit later this month.

In London, the British government said it had no plans to move its Israel embassy from Tel Aviv to Jerusalem, and said it disagreed with the U.S. decision to do so.

The Russian government said it feared the embassy move would increase tensions across the Middle East.