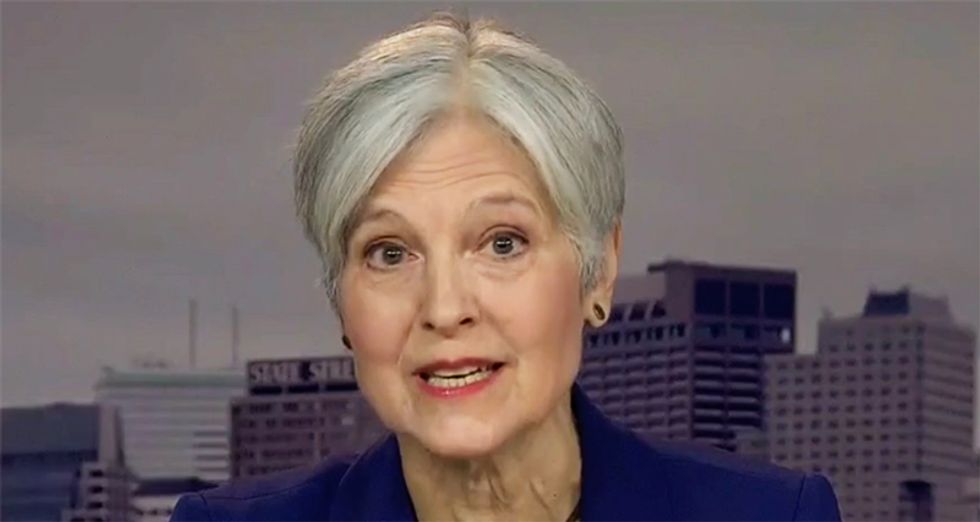 Appearing on CNN's New Day, former Green Party candidate Jill Stein refused to condemn Russian meddling in the 2016 election, while telling host Chris Cuomo that she is refusing to turn over some campaign communications to Senate investigators because she is "protecting Americans' civil liberties."

According to reports, Stein's campaign has provided some documents related to communications with officials tied to Russian media organizations and the Kremlin, as well as information related to her 2015 trip to Moscow to attend a dinner where she sat a table with President Vladimir Putin and former Trump administration aide Michael Flynn

Beginning the interview, host Cuomo pointed out to the 2-time presidential candidate that she is giving the appearance of hiding something by not fully cooperating.

"Let's get the facts straight," Stein replied. "We complied with everything relevant to the question of Russian interference. we turned over all of our communications with Russian media, government, business, although there was no communications to turn over, like-wise anything having to do with Wikileaks or with opposition research or Fusion GPS."

"What we didn't turn over was material that basically protects the civil liberties of all Americans. at a time when our civil liberties are really being seriously eroded," she added.

"What did you not turn over in the name of civil liberties?" the baffled CNN host pressed.

"What we did not turn over --," she began before switching gears. "I should add, we also turned over our policy positions which were the same as what we said publicly throughout the campaign, so there was nothing hidden there. We did not turn over  our internal discussions about policy which were really no great shakes because there was not really -- not much difference between the policies that the Green Party has held for a long time and the policies of the campaign."

"It's not like there's some, you know, a special golden goose that we're protecting here or some vulnerable conversation," she continued. "But rather we're standing up on a principle and that is the principle that's part of the first amendment, our right to basically freedom of association and that -- that needs to be protected and the courts have always upheld that ."

"Do you still have reservations about whether or not Russia interfered in election and did so with obvious negative intent?" Cuomo asked.

"So let me say I think it would be naive to think that Russia did not try to interfere," she began. "Certainly that's what the United States does and that's not to justify it. Interference is wrong and it's an assault against democracy, and it should be pursued. But we should pursue it knowing that we do it too, as James Woolsey, the former CIA head recently said publicly, I believe it was on Fox, yes! We're doing that and we always do it and the records show we do it about twice as much as the Russians over the course of the past."

"That would be the case for Russia to make, not from the American perspective," Cuomo shot back. "Let Russia say the United States did it to us so this is fair play. from the American perspective and you running for president, more than once of this country, shouldn't your position have been this was bad what they did?  They're trying to do it right now and we have to stop it?"

"You know, I think that kind of position which says that we're in a totally different category from the rest of the world is not working," Stein shot back, before rambling about tax dollars going to the Pentagon and praising the Trump administration for making headway into the problems with North Korea -- and never addressing ongoing efforts by Russia to hack U.S. elections.

Following the interview CNN Jim Sciutto tweeted: "Jill Stein is on @NewDay right now repeating Russian talking points on its interference in the 2016 election and on US foreign policy."

Jill Stein is on @NewDay right now repeating Russian talking points on its interference in the 2016 election and on US foreign policy.
— Jim Sciutto (@Jim Sciutto) 1525177464.0