'I would like him to stop lying': CNN's Tapper confronts Kellyanne Conway over Trump lies about Daniels payoff 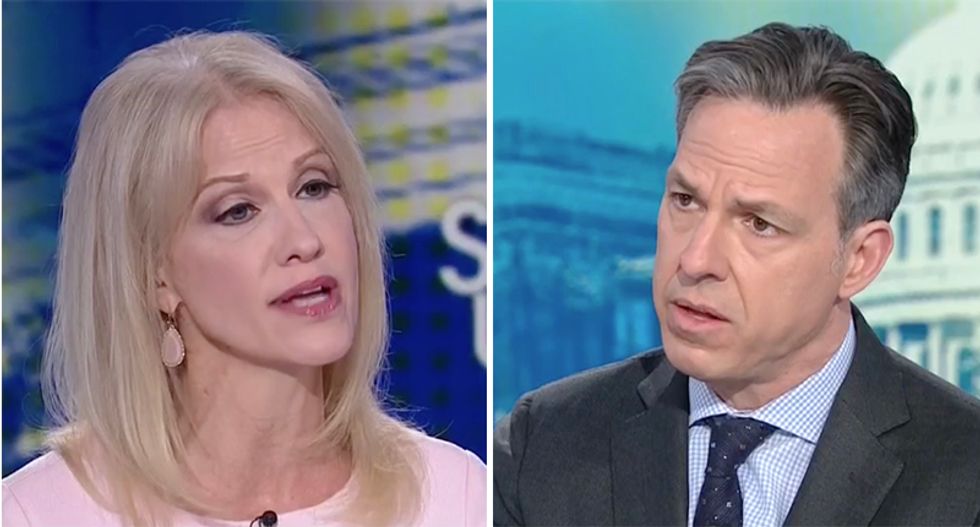 In a typical confrontational exchange between CNN host Jake Tapper and White House adviser Kellyanne Conway, an exasperated Tapper finally cut in on the filibustering aide to President Donald Trump to say he was tired of the lying.

As the State of the Union host tried to get a straight answer out of Conway over the timeline of when Trump became aware that hush money was being paid to adult film star Stormy Daniels by his personal attorney, Michael Cohen, Conway continually deflected by talking about job numbers and complaining about how the network covers Trump.

"Do you think his job includes lying to the American people because he continues to do so?" Tapper asked.

"He does many things," Conway shot back. "You just want that to go viral and you want to say President Trump and lie in the same sentence."

"No, I would like him to stop lying," Tapper interrupted.

"He talked about the three American hostages [taken by North Korea] and how the Obama administration tried and failed to get them free," Tapper then continued. "Two of the three were detained while Donald Trump was president so there is no way that Obama could have gotten them released because they were captured when Trump was president. That is just a lie and that tweet is still up there. That is just symbolic of the fact that this president gets in his own way all the time even when there is something good happening."

[Editor's note: An earlier version of this story had Tapper saying, "I would like you to stop lying." Repeated listening seems to indicate he said either "him" or  "it." The story and headline have been corrected to reflect this change.]