'Were you lying to us?' Reporters grill Sanders over Stormy -- but she says lies were the 'best information' 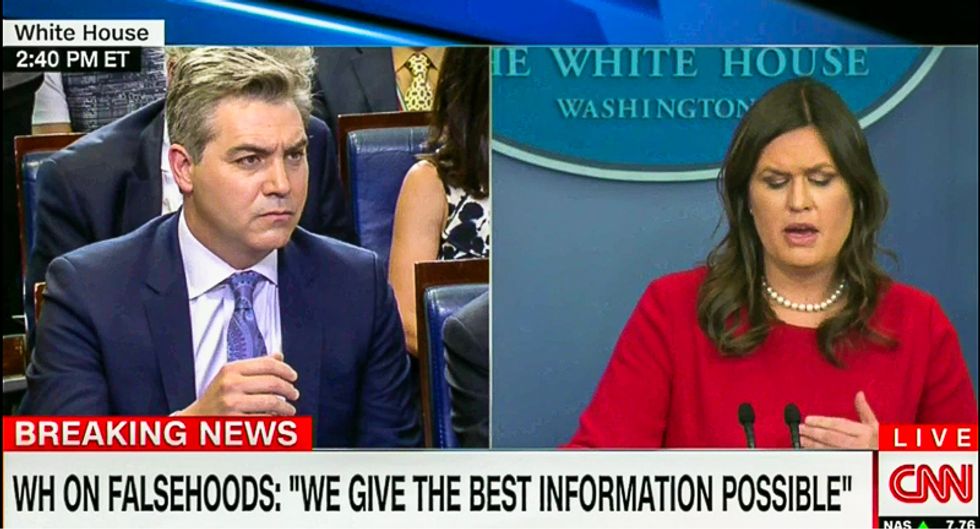 White House Press Secretary Sarah Huckabee Sanders on Thursday insisted that she was giving reporters "the best information" when she claimed that President Donald Trump knew nothing about the payment to adult film star Stormy Daniels, which later turned out not to be true.

During Thursday's White House briefing, ABC's Jonathan Karl asked Sanders how the American people could trust her words after Trump attorney Rudy Giuliani contradicted her and revealed that Trump knew about the payment to Daniels.

"We give the very best information that we have at the time," Sanders insisted. "I do that every single day and will continue to do that every day I'm in this position."

"These are statements that are just not true," Karl noted.

Sanders repeated her previous answer: "We give the best information possible at the time and we're going to continue to do that."

"He started paying Michael Cohen back in February of last year," Karl interrupted, suggesting that Trump knew about the Daniels payment before he and Sanders both claimed that he was unaware of the hush money.

"Is that a question?" Sanders snapped.

"I'm saying, how could he not have known? He was paying him back?" Karl said.

"I'm not going to get into those details," Sanders said, cutting Karl off.

"How can you be aware only 10 days to two weeks ago but at the same time be in the process of paying monthly retainers to cover this reimbursement to Michael Cohen?" Acosta wondered.

"I can't get into the details," Sanders said again.

Acosta pressed: "You said on March 7th that the president 'has denied all these allegations', were you lying to us at the time or were you in the dark."

"The president has denied and continues to deny the underlying claim," Sanders explained. "And again, I've given the best information I had at the time."

"I think it's a fairly simple answer," Sanders shot back.