Meghan McCain tells Sen. Orrin Hatch to STFU about the invitation list for her father's funeral 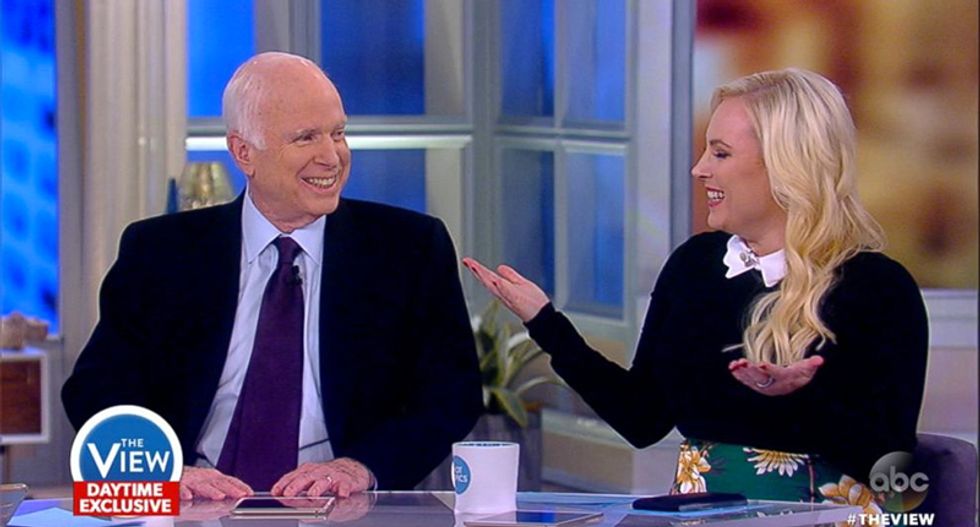 As Sen. John McCain (R-AZ) fights glioblastoma, his daughter Meghan McCain has been forced to miss episodes of "The View," which she joined as a co-host in late 2017. While the younger McCain flew home over the weekend, news broke that the senator was beginning to make funeral arrangements.

Despite profound political differences, McCain asked former President Barack Obama to deliver the eulogy at his funeral. While the senator also asked President George W. Bush to eulogize the senator as well, the family specifically asked that President Donald Trump not attend.

Trump was known for mocking McCain's service in the military and as a prisoner of war. Trump has personally attacked the fellow Republican over policy disagreements. It finally came to a head when his wife and daughter were forced to call the president and ask that he not personally attack the senator while he's fighting for his life.

"He's doing really good, making jokes, talking, standing, you know, doing a great recovery," Meghan McCain said after spending a long weekend with her father. "He has a great team around him."

But when it came to Hatch, McCain said she would "like everybody to take a collective breath and chill out, on my dad for a second, especially Orrin Hatch. We're all doing good and hanging in. It's a process as anyone knows if you know anyone who has cancer so please be kind and respectful of the fact that there's a family here, you know."

Co-host and unabashed liberal Joy Behar noted that Hatch "used to be mentally stable," but now it seems "he says crazy stuff."

"It's just, insensitive and it's not appreciated at this moment," McCain said.

"Yes. Thank you, Whoopi. Thank you very much for that," McCain responded.

Hatch has drawn an increasing amount of criticism over his final year in office as he's come out in support of many thing Trump has said that flies in the face of his faith and morals.