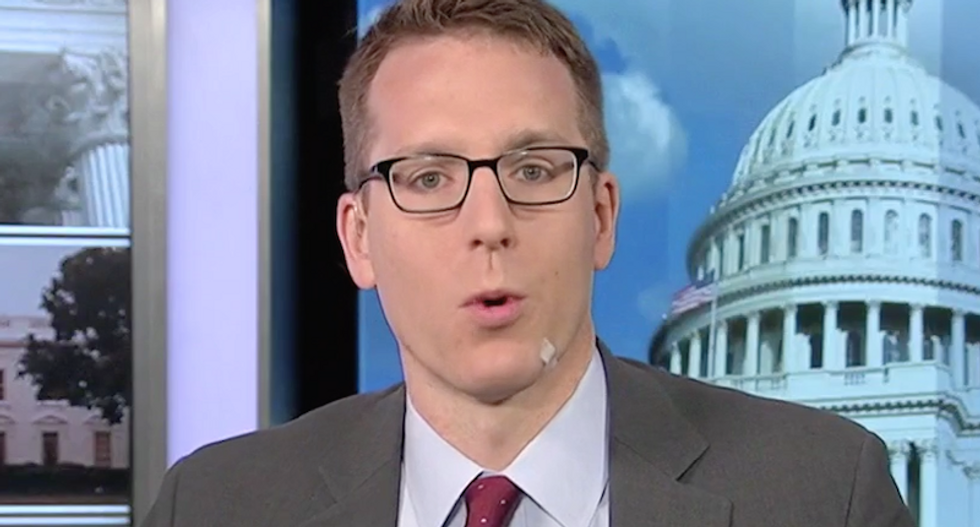 David Fahrenthold won the Pulitzer Prize for his coverage of President Donald Trump's charitable work -- and now he's turning his attention to the president's business activity.

The Washington Post reporter appeared Monday on MSNBC's "Morning Joe" to discuss his latest investigative work with his colleagues Jonathan O’Connell and Jack Gillum, who found the self-proclaimed "king of debt" went on a "buying binge" about a decade ago using at least $400 million in cash.

"It is an unusual change," Fahrenthold said. "The change doesn't happen right after his real terrible experiences with debt in the early '90s. He comes back from those, he uses debt to buy more properties, and in 2006, a number of years after those bad experiences with debt, he starts buying in all cash. He bought two golf courses for $80 million total and bumped in renovation, so he went from being heavily dependent on debt to buying these things in all cash."

The reporters were unable to find where all that cash came from, but they were surprised by the unusual change in the Trump Organization's operations.

"I can't tell he didn't or did have the money, I can't see inside the business in that way, but people told us even if you did have the money, this is a strange way to spend it," Fahrenthold said. "Most investors use debt to augment their own cash."

Host Joe Scarborough said the change in operations made even less sense in historical context.

"It's like the old Dire Straits son, 'Money for Nothing,'" Scarborough said. "Interest rates were in a historically low place. so this would be the worst time in Donald Trump's entire adult life to pay all cash for properties. Another reason why it makes absolutely no sense."

"There's so many benefits to buying with debt," he said. "Trump himself has continued to tout it. 'Debt's the way to do it, I'm the king of debt,' but he's privately spending all cash on properties. The explanation, which we got from Eric Trump, was we decided in 2006 we wanted to be more conservative -- that's their explanation. I don't have any other at this point."

Fahrenthold agreed it was possible the Trump family became more financially prudent and plowed income from "The Apprentice" and licensing deals into their real estate holdings, but he said their investments were unusual.

"Trump doesn't seem to fit into those categories," the reporter added. "He's trying to invest in golf, I think, to make money. People that do that say it's better to do it with debt and co-investors just because your money goes further and you spread out your risk. You're not sinking your own money into a small number of golf courses."