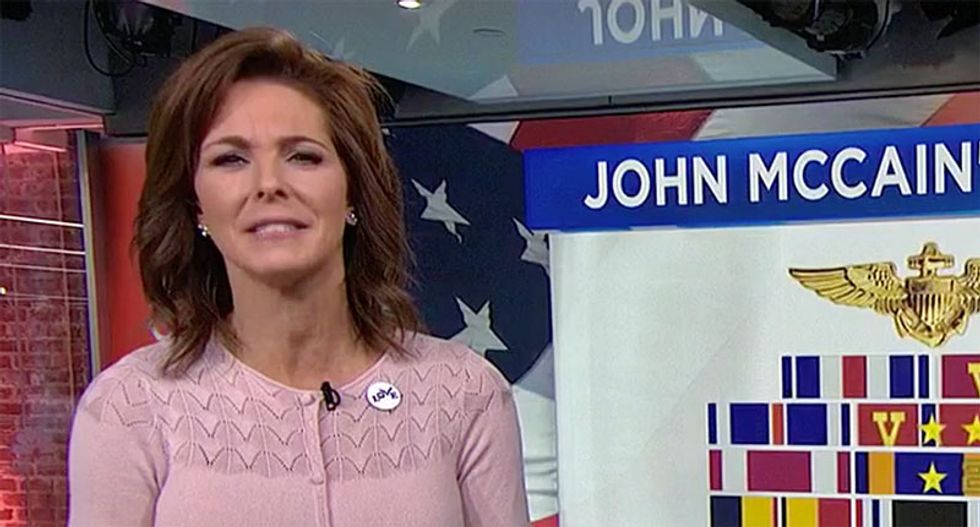 MSNBC anchor Stephanie Ruhle noting Sen. John McCain (R-AZ) has been awarded "the Silver Star, the Purple Heart, the Bronze Medal, the Navy Combat Action ribbon, the prisoner of war medal, and many, many more."

"We're coming to you at a time when poking fun at the impending death of a former Navy fighter pilot, a prisoner of war, a long-time public servant who is now battling brain cancer, that appears to be fair game," she noted. "Today, it is from a top White House communications -- a communications -- aide for President Trump, her name is Kelly Sadler."

As Ruhle recounted McCain's experience in Vietnam, she began to choke up.

"So let me recap for you -- White House communication aide Kelly Sadler, Senator John McCain survived being blown out of the sky, sinking to the bottom of the lake, 5 1/2 years of torture and is now battling brain cancer."

"And Mrs. Sadler, if you wonder about his time in captivity, please, I invite you to watch him walk," the host continued. "To this day he walks with a limp and he cannot raise his arms above his shoulders."

"So please, tell us again, Mrs. Sadler, how Senator John McCain, he doesn't matter," Ruhle challenged. "Senator John McCain matters, he's a great American who fought and nearly died multiple times for the freedoms you and I enjoy every single day."

"John Kelly, you are the chief of staff of that White House, please, we'd love to hear an apology," Ruhle urged.