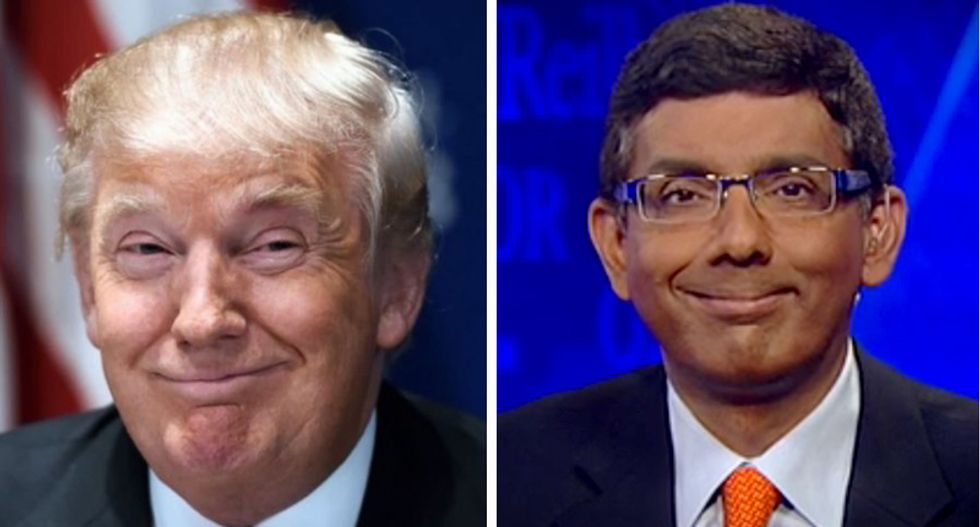 A New York Times opinion piece written by the editorial board alluded to all of the possible reasons why President Donald Trump would pardon 'noxious clown' Dinesh D'Souza.

They discussed the overarching theme and patterns that his pardon decisions reveals. They hinted that the president may be trying to send a message of "loyalty" to his peers involved in the special counsel’s Russia investigation. Or that the president could possibly be throwing his pardon power in the face of his enemies.

"Maybe Mr. Trump is wielding his pardon power against his perceived enemies in federal law enforcement. Besides Mr. Bharara, there’s James Comey, who prosecuted Ms. Stewart, and Patrick Fitzgerald, who prosecuted both Mr. Blagojevich and Mr. Libby, and is a friend of Mr. Comey’s," the editorial board  explained.

They also went into President Trump's history with pardons. "And let’s not forget Joe Arpaio, the former Arizona sheriff and hunter of undocumented immigrants, whom Mr. Trump pardoned last summer for contempt of a federal court order — Mr. Trump clearly was thumbing his nose at the federal court that found Mr. Arpaio guilty," the editorial board explained.

Even though most people don't know why the president is issuing these pardons, the New York Times said it's clear that he is using the pardon power to attack people.

"One thing is becoming clear: Donald Trump uses whatever power he has to attack the people he feels have wronged him, and he will do what he feels he must to protect himself," the editorial board wrote. "For him, pardons are a means of vengeance. Those he’s issued to date are only a small hint of what could be coming as the Russia investigation heats up. Last year, John Dowd, Mr. Trump’s lawyer at the time, discussed the prospect of pardons for two of the president’s former top advisers, Michael Flynn and Paul Manafort, with their lawyers."

"Mr. Trump clearing the record of some noxious clown, is what should really worry us," the editorial concluded.