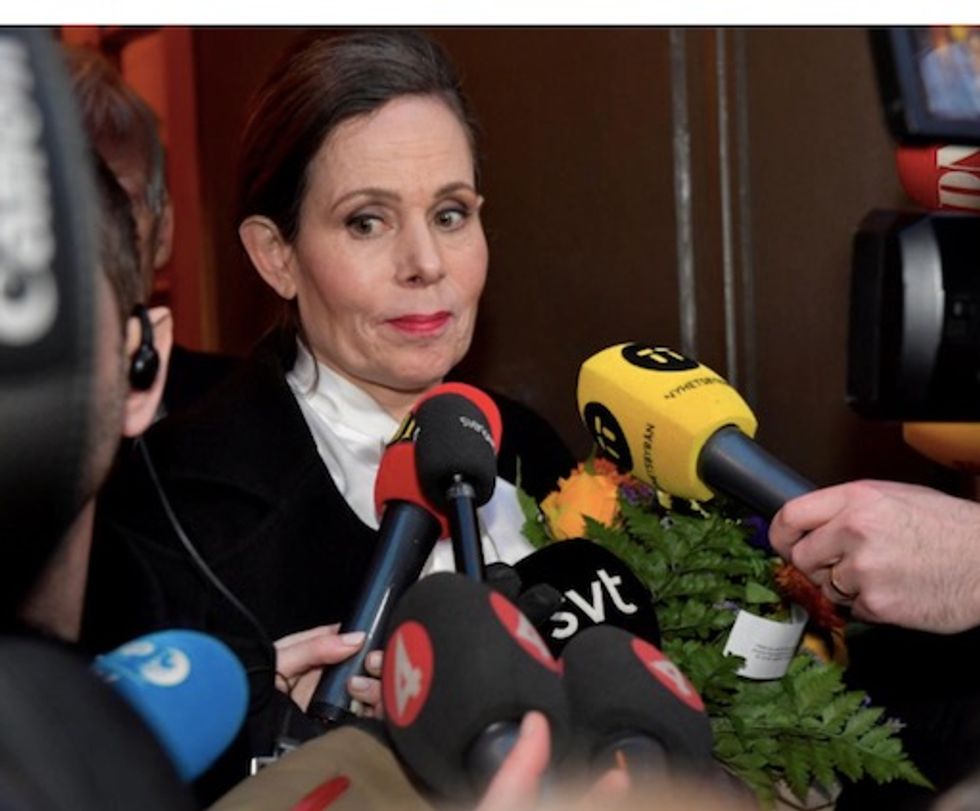 FILE PHOTO: The Swedish Academy's Permanent Secretary Sara Danius talks to the media as she leaves after a meeting at the Swedish Academy in Stockholm, Sweden April 12, 2018. TT News Agency/Jonas Ekstromer/via REUTERS/File Photo

The Swedish Academy which decides the Nobel Prize for Literature said on Friday it would not make the award this year because of a sexual misconduct scandal that has caused turmoil in its ranks and led to the resignation of a string of board members.

A postponement or cancellation of the prestigious prize has not occurred in decades, but the usually secretive Academy acknowledged its reputation had been damaged by allegations against the husband of one of its members and the admission that the names of some prize-winners had been leaked.

“The present decision was arrived at in view of the currently diminished Academy and the reduced public confidence in the Academy,” it said in a statement.

The Academy, composed of Sweden’s literary elite, said it aimed to award two prizes in 2019, including the 2018 one.

“We find it necessary to commit time to recovering public confidence in the Academy before the next laureate can be announced,” Anders Olsson, who is interim Permanent Secretary of the Academy, said.

The turmoil caused by sexual allegations against the husband of one of the board members is unprecedented for the Academy, a revered institution established by King Gustav III in 1786 and still under royal patronage.

Though the Academy has courted controversy in the past, for example by awarding the 2016 prize to American singer-songwriter Bob Dylan, debate has mainly focused on literary merit rather than the institution itself.

It found itself suddenly at the center of controversy after allegations of sexual harassment and assault were made by 18 women against photographer and cultural figure Jean-Claude Arnault, who is married to Academy member and author Katarina Frostenson.

The Academy provided financial support for a cultural club run by Arnault and Frostenson.

Three members of the Academy’s board resigned because of dissatisfaction over the way a probe into the allegations was conducted. The Academy’s head and Frostenson also subsequently stepped down followed by a sixth member last week.

As the scandal unfolded, the Academy also disclosed that an investigation had shown that the names of some prize winners - the subject of lively betting - had been leaked.

Arnault denies all allegations, regarding both sexual misconduct and leaking the names of laureates, his lawyer told Reuters on Thursday.

There were no awards between 1940 and 1943, due to World War Two, while the American novelist William Faulkner received his prize a year late in 1950 when two prizes were handed out.

The Nobel Foundation, which administers the estate of dynamite inventor Alfred Nobel, said the crisis at the Academy had “adversely affected” the Nobel Prize.

“Their decision underscores the seriousness of the situation and will help safeguard the long-term reputation of the Nobel Prize,” the Foundation said in statement.

Arcane rules that make appointments for life have so far meant that the 18 Academy members have not been able to technically resign. But Swedish King Carl XVI Gustaf said last month he would change the rules, making it possible to bring in new members.