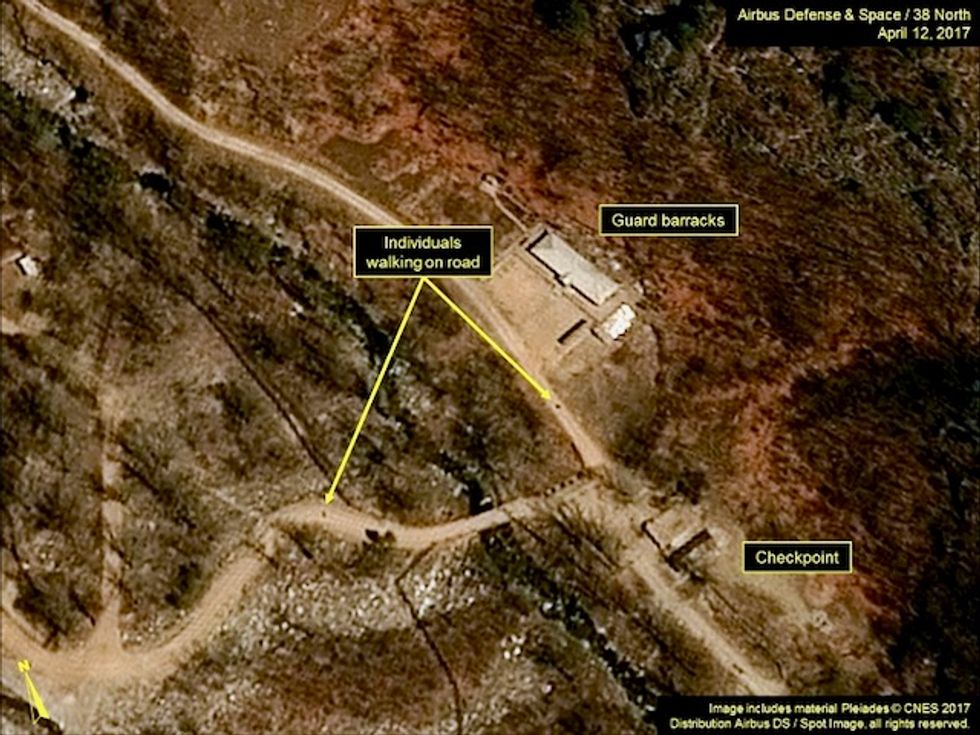 Invited foreign journalists began a long journey up North Korea's east coast Wednesday to witness the slated destruction of the reclusive regime's nuclear test site, a high profile gesture on the road to a summit with the US that Donald Trump now says might not happen.

In a surprise announcement Pyongyang said earlier this month that it planned to "completely" destroy the Punggye-ri facility in the country's northeast, a move welcomed by Washington and Seoul.

Punggye-ri has been the staging ground for all six of the North's nuclear tests, including its latest and by far most powerful one in September last year, which Pyongyang said was an H-bomb.

The demolition is due to take place sometime between Thursday and Friday, depending on the weather.

The North has portrayed the move as a goodwill gesture ahead of a planned June 12 summit between Kim and Trump in Singapore.

But doubts have since been cast by both sides on whether that historic meeting will take place.

Last week Pyongyang threatened to pull out if Washington pressed for its unilateral nuclear disarmament. Trump also said the meeting could be delayed as he met with South Korean leader Moon Jae-in in Washington on Tuesday.

Politically, Trump has invested heavily in the success of the planned summit, and so privately most US officials, as well as outside observers, believe it will go ahead.

But as the date draws near, the differences between the two sides are coming into sharp relief.

Washington has made it clear it wants to see the "complete, verifiable and irreversible denuclearisation" of the North.

Pyongyang has vowed it will never give up its nuclear deterrence until it feels safe from what it terms US aggression.

Observers will be watching this week's demolition ceremony closely for any clues to the North's intentions.

Experts are divided over whether the demolition will render the site useless. Sceptics say the site has already outlived its usefulness with six successful nuclear tests in the bag and can be quickly rebuilt if needed.

Previous similar gestures by the North were rapidly reversed when the international mood soured.

But others say the fact that North Korea agreed to destroy the site without preconditions or asking for something in return from Washington suggests Pyongyang's sincerity.

Go Myong-hyun, an analyst at the Asan Institute for Policy Studies, said both sides were playing "a game of chicken" in the run-up to the summit "to gain an upper hand in negotiations".

He said the destruction of the site would win Pyongyang international sympathy even if the summit collapses.

"North Korea can say to the international community that it did its best to achieve denuclearisation through negotiations but was pressured by the United States and couldn't do it," he said.

A handful of foreign journalists from China, the US, Britain, Russia and South Korea were invited to attend the demolition ceremony.

They set off from the North Korean city of Wonsan on Wednesday around 0800 GMT, according to tweets from some of the journalists within the group.

They are expected to travel for some 20 hours by train, bus and finally a short hike to the remote test site -- a vivid illustration of the impoverished country's notoriously decrepit transport infrastructure.

The South Korean journalists were only allowed to attend at the last minute by Pyongyang on Wednesday.

Seoul scrambled a government passenger jet to ferry them to Wonsan -- a rare direct flight between the two countries.

Agence France-Presse is one of a number of major media organisations not invited to cover the demolition.

On Seoul's streets Wednesday, South Koreans were circumspect about whether they thought Pyongyang was genuine.

"I don't really have any faith," said Korean-American businessman Peter Chung. "But... I hope for the best."