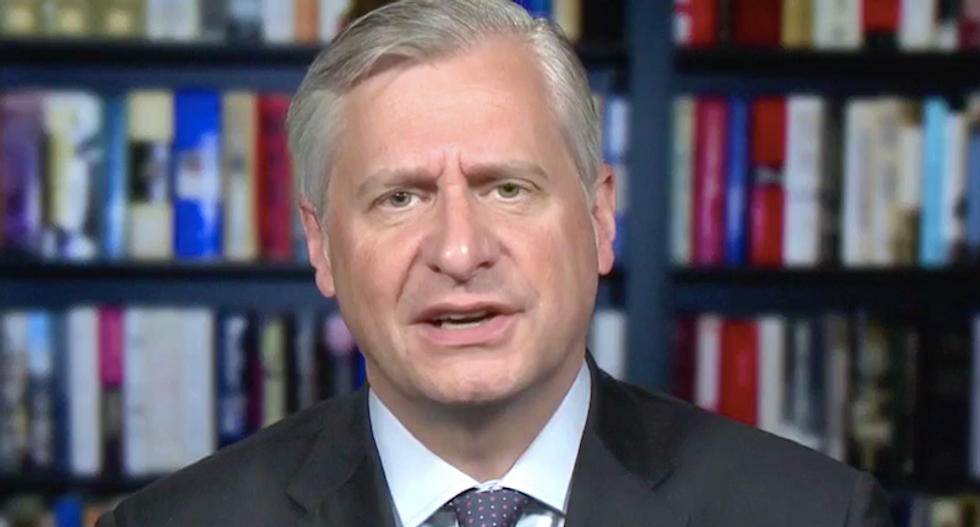 The "Morning Joe" host said the president was moving closer to triggering a full-blown constitutional crisis by calling on the Justice Department to investigate his predecessors, and he said the GOP must take action to preserve the rule of law.

"A lot of really good people in that party, a lot of people like (Sen.) Rob Portman (R-OH) who actually care about the Constitution," Scarborough said. "The chairman of the Senate Judiciary Committee has said stay away from Bob Mueller."

"You've had a lot of people who came out, good, decent, honorable, upstanding citizens -- this puts more pressure on them, a president who only can be described this weekend as Nixonian," he added. "This is a lead-up to the 'Saturday Night Massacre.' So what does, say, (Sen.) Joni Ernst in Iowa do about this? What do other good Republicans in the Senate and the House do about this?"

MSNBC's Elise Jordan, a former Bush White House and State Department aide, said Trump has been warned repeatedly not to interfere with the special counsel, but she worried that he would be unable to control his own worst impulses.

"I feel there has been a coordinated Republican effort to impress upon him that firing Bob Mueller would really, really be the fracture and upset the tenuous alliance that exists right now that's condoning of this behavior from Donald Trump," Jordan said. "The question I have can Donald Trump ever control his impulsivity enough when he really is threatened to not do that."

Scarborough said, flatly, no -- and Jordan said the president's behavior on social media this weekend was part of a worrisome pattern.

"After what he did this weekend, this was not some well thought-out grand strategy," Jordan said. "This was Donald Trump mouthing off on Twitter, exercising his Twitter hand. On Sunday morning, the morning other presidents previously went to church, Donald Trump is having a Twitter war. That's why I think he has to continually up the ante when it comes to shock value, and I think it's only going to continue with what he gets away with here."

Presidential historian Jon Meacham agreed that Trump appeared to be at the same point Richard Nixon was when he ordered Justice Department officials to fire independent special prosecutor Archibald Cox -- and he predicted Trump would eventually face impeachment.

"One Nixonian element here that hasn't gotten a whole lot of attention, at least explicitly, is both Nixon and Trump have an ongoing obsession with their former opponents in a way that I think shapes what they do in deleterious ways, to say the least," Meacham said.

He said Nixon justified his White House recordings by saying that Franklin D. Roosevelt and Lyndon B. Johnson had done it, and he was obsessed with the president who had defeated him in 1960.

"He was always obsessed with what President Kennedy had gotten away with, in his view, and remember, of course, that's clearly true with President Trump, with an obsession with both Obama and Secretary Clinton," Meacham said.

He said the midterm elections would play a crucial role in determining Trump's fate.

"The most important political story in the country right now, in many ways, are those 435 House races," Meacham said. "I've been skeptical of this, but I would bet a good bit of money this is going to end up in the House with some kind of impeachment proceeding, and the makeup of that body and ultimately the reaction of the United States Senate, which is supposed to be the great deliberative check and the great final hammer on these things, I think we're going to end up -- that's going to be the season finale of this."