Shouting match breaks out on CNN when former Republican nails Stephen Moore: 'You cannot make up these facts' 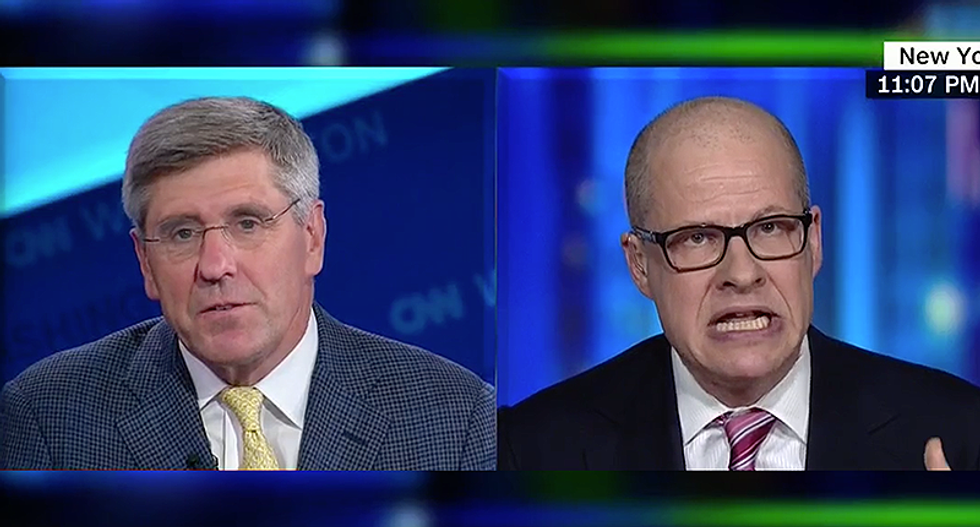 President Donald Trump's economic advisor Stephen Moore took to CNN Monday to promote the president's latest conspiracy theory that former President Barack Obama ordered an FBI agent to infiltrate his campaign. Like the allegations of wiretapping Trump Tower, the president has taken a small amount of information and blown it up into an entirely different story. It was enough to make former Republican and Russian-American author Max Boot furious.

"There is no evidence of that. It's all built on the conspiracy theory," Boot said. Moore demanded to know how Boot knows. "There is zero evidence of what you're saying. If the FBI and the Obama Justice Department were trying to hurt the Trump campaign, why is it that they kept their investigation of Trump such a tightly held secret that nobody knew about until after the election? It doesn't make any sense."

Moore claimed it was because they probably didn't find anything. "That's the point," he said.

"They found a lot of things," Boot cut in. "They found at least four members of the Trump campaign that were closely linked with the Russians. You had the campaign manager and the deputy campaign manager whose associate was a former go GRU officer in the Ukraine. You had [George] Papadopoulos and Carter Page, who were linked with the Russians. Papadopoulos pleaded guilty to a crime. Carter Page was under a FISA investigation as a suspected foreign agent. There was a lot of things that had they leaked it before the election would have hurt his campaign. But they didn't leak it. They protected national security, something Trump and his aides don't seem to care much about, I'm sad to say."

Moore's excuse was simply that Boot hates Trump, thus the facts that he outlined are somehow null and void.

"People are believing what they want to believe," Moore retorted. That's when Boot was done.

"Steve, no, you are not entitled to your own facts. There is reality here. You cannot make up these facts," Boot shot back.

"Because there is no evidence of it!" Shouted Boot. "This is the president ordering a politically motivated investigation, to distract from the investigation of his own campaign. This is highly improper. It has not happened before."

Moore argued that the same claim that Boot is making that Trump is engaging in a politically motivated investigation is the same thing that they believe is happening with Mueller. Boot called it nonsense, saying that special counsel Robert Mueller is a Republican who was appointed by a Republican president under a Republican Justice Department investigation being overseen by a Republican appointee, who is also a Republican. They're all following an evidenced-based investigation. The accusations against Obama are nothing more than a conspiracy theory possibly cooked up by Steve Bannon.

Trump has cried wolf on these claims once before when he said that Obama wiretapped him at Trump Tower. That proved not to be true.

Watch the full shouting match below: