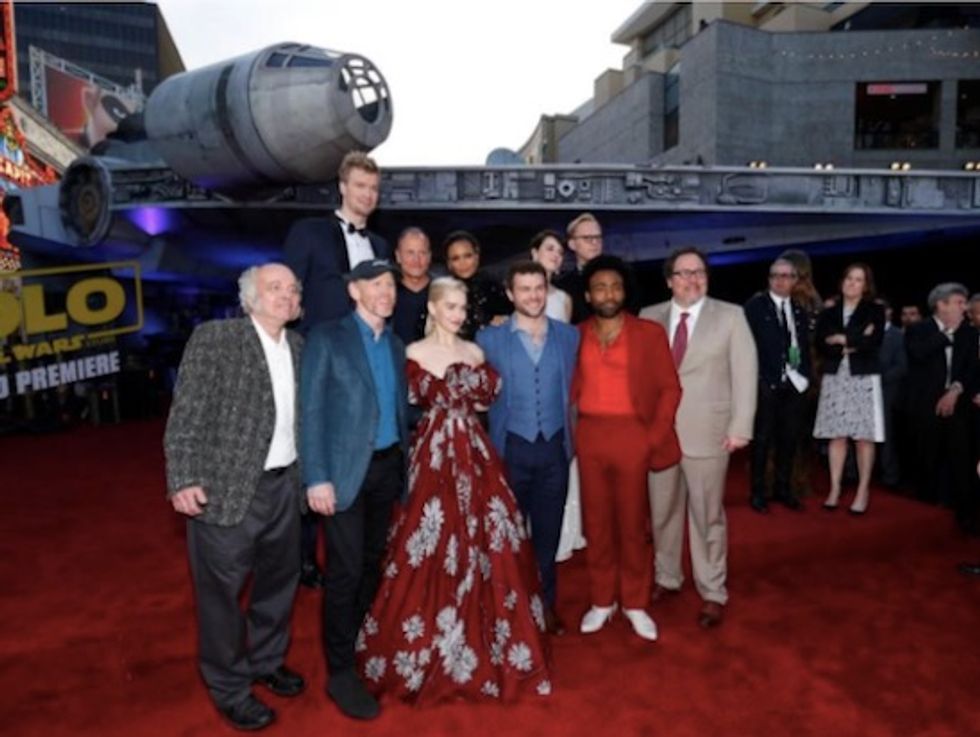 A giant replica of the Millennium Falcon towered over Hollywood Boulevard and Chewbacca walked the red carpet at Thursday’s world premiere of “Solo: A Star Wars Story,” a movie about the early years of the space saga’s famous smuggler.

The movie begins rolling out in international theaters on May 23.

Alden Ehrenreich, 28, stepped into the role of Han Solo made famous by Harrison Ford in the original “Star Wars” trilogy that began in 1977. Ehrenreich plays a younger Solo just beginning his pilot training and seeking his own spaceship when he becomes involved in a dangerous mission in the galaxy far, far away.

“This was a very unusual circumstance, and I decided to take it on frankly as a kind of a challenge,” Howard said on the red carpet. “I’m so glad that I jumped in.”

Stars including Ehrenreich, Emilia Clarke, Donald Glover and Woody Harrelson posed on the carpet alongside the furry wookiee Chewbacca and a handful of Stormtroopers.

Box office experts predict fans will turn out in force for “Solo.” The movie could bring in as much as $185 million over Memorial Day weekend, which would be a record for that holiday period, according to BoxOffice.com.

Fans around the world have debated how Ehrenreich, little known beyond a well-received performance in quirky 2016 comedy “Hail, Caesar,” will take on one of the most iconic roles in cinema.

At Thursday’s premiere, audience members cheered at key moments such as when Han meets his eventual co-pilot Chewbacca, takes control of the Falcon for the first time, and comes face-to-face with fellow smuggler Lando Calrissian, portrayed by Glover.

Mark Hamill, who played Luke Skywalker in five “Star Wars” films, also attended the premiere, as did Billy Dee Williams, who portrayed Calrissian in “The Empire Strikes Back” and “Return of the Jedi.”

In “Solo,” the younger Lando “doesn’t know what he’s quite doing yet,” Glover said. “I think he understands how to survive and make that look good. He knows how to make surviving look sexy.”