'That's insane': Rachel Maddow just listed all of the ways Rosenstein has been caving into Trump's demands for months 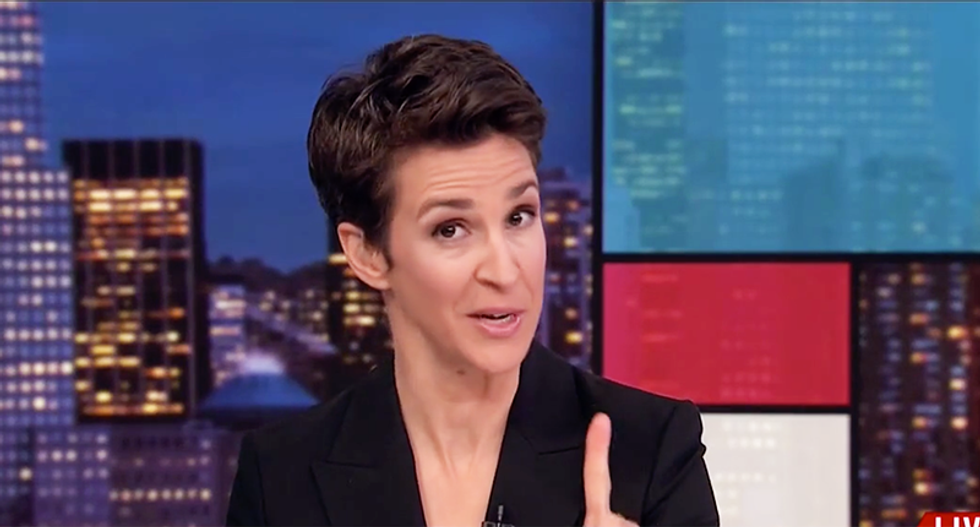 During her Monday episode, MSNBC host Rachel Maddow connected the dots of the promises made by Deputy Attorney General Rod Rosenstein, all the way back to the beginning of this series of investigations.

She began by saying that the meeting with Rosenstein and FBI Director Christopher Wray is the second of President Donald Trump's actions that he has taken to thwart the Russia investigation. She noted that while he has said and tweeted many things, when looking at what he's actually done, this marked only the second time he's tried to block the investigation.

She explained that the first time it was seen was around the firing of former FBI Director James Comey and wondered why Rosenstein would even be needed to help Trump fire Comey. She also noted that the DOJ has been more than willing to hand over the text messages between the FBI agents when conservative media and Republican officials demanded it.

"The Justice Department, of all agencies, is well within its rights to say 'Sorry, that matter is the subject of an ongoing investigation, the public will not have access to any internal documents relevant to that investigation until the investigation is complete,'" Maddow said.

She noted that the DOJ also handed over the Comey memos when those memos are also seen as part of the obstruction investigation. She wondered why too the DOJ handed those over so willingly.

"The Justice Department and the FBI also have shed nearly all of the senior officials who were corroborating witnesses for at the time he wrote up those memos, when he was documenting his interactions with the president because those interactions were very irregular, they were seemingly improper -- Comey wrote those memos to document those interactions," she continued. "He confided in other senior law enforcement officials at the time in order to create a record of those interactions with the president in case it someday needed to be used as evidence. The Justice Department and the FBI have since shed or demoted most of those officials who Comey confided in."

She also explained that while they were being shoved out or down, Trump was also leading "a systematic campaign of attacking them one by one, often by name."

There was another incident with the DOJ where they initially pushed back on a demand from pro-Trump officials in Congress to see the FISA warrant used to obtain surveillance on Carter Page. Maddow explained that such information is "never" handed over. "They never even admit to the existence of FISA warrants in public." In this case, however, the DOJ caved again.

"If you're the subject of a criminal inquiry, imagine how helpful it would be to have access in the middle of that investigation to the prosecutor's theory of the case when they open their investigation into you, to have their physical written documents about what they were coming after you for," she wondered. "I mean, to have the supporting materials that were shown to a judge in order to justify a surveillance warrant against somebody who was working for you. That would be very helpful if you were the subject of a criminal investigation, to have that kind of window in the middle of an investigation into the prosecutor's approach and their evidence and their strategy."

She said that the DOJ is incrementally handing these documents over, and they're probably copied and sent directly to the Trump team. So, already the DOJ has broken with norms that existed for the DOJ in previous administrations from both parties. It's interesting given that Rosenstein gave a powerful speech less than a month ago about how the DOJ "will not be extorted."

"I mean, step back from there for a second," she paused. "Under normal circumstances it would be astonishing for the president to summon the head of the Justice Department and the head of the FBI to come to the White House to discuss the ongoing case against him. But that is what happened today. It wasn't like a meeting with the White House counsel. It was the president calling them up there to meet with him. To talk about the investigation into him."

She said that after there it seems to have even gotten worse. Now they're demanding the FBI source, which is also unheard of. Now Rep. Devin Nunes (R-CA) is demanding all of the evidence this informant turned up along with it.

"The Justice Department has been sliding down this slippery slope for months, handing over the kind of information they never release about ongoing investigations," she said. "But the identity of a confidential source, all Justice Department records about that source? The evidence that source was able to turn up in an investigation that is still ongoing? You're going to hand that over to people like Congressman Nunes, who is absolutely going to turn that around and hand it to the president whose campaign is being investigated here? That's insane."

Nunes was part of the Trump transition team and campaign. After today, she noted that the DOJ is simply sliding further down the slope. For those who think that the DOJ isn't doing that much damage, Maddow urges a closer look.

She read Rosenstein's statement and explained that on one hand Rosenstein is giving into Trump but on the other he's confirming in his statement that "the FBI was engaged in a counterintelligence investigation of people who were suspected of involvement with the Russian agents who were interfering in the election at the time. And those people who were the subject of that counterintelligence investigation were on the Trump campaign."

It might be the case that Rosenstein isn't giving anything away, Maddow claimed. But she asked how we knew if he was doing the right thing.

"Is there something about the way he and the Justice Department are acting that can tell us whether they're being smart and strategically flexible to protect the [Robert] Mueller investigation, to insulate law enforcement from the worst of what the president and his allies have in mind?" she asked. "Or are they just giving away the store, giving in, caving, and leaving us with a new world."

One thing is certain, according to the host, the DOJ has changed and their "natural order" of doing business has come to an end. She noted at the end of the program that all of the lines that would normally have been drawn by a normal Justice Department have already been crossed by its current occupants.