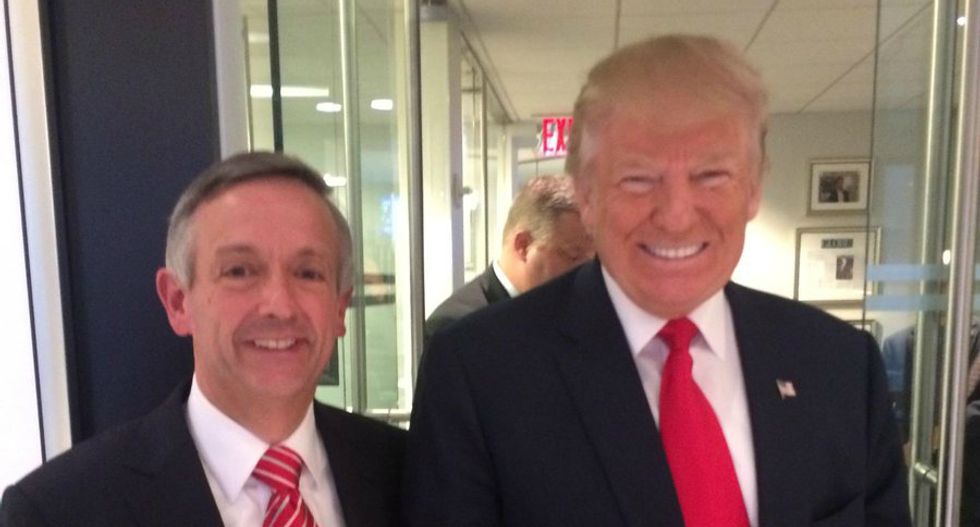 Pastor Robert Jeffress, a Fox News contributor, megachurch Baptist preacher from Dallas, and close Trump ally and surrogate, has been chosen by the Trump administration to lead a prayer at Monday's opening dedication celebration of the new – and highly controversial – U.S. embassy in Jerusalem. The choice of Jeffress makes this highly controversial move all the more problematic, given his views on literally every other religion, including other Christian religions, Judaism, and Islam.

Jeffress, who hosts both radio and TV shows that are broadcast in hundreds of cities in the U.S. and around the world, has a long history of delivering incendiary and bigoted remarks.

In short, Jeffress says that if you're not a Christian – and a certain type of Christian – you're going to hell, as Right Wing Watch has documented.

He has said Islam promotes pedophilia, and is "evil," "violent," and a "false" religion.

Unsurprisingly, Jeffress also preaches that "homosexuality is an abomination," "is degrading, is a degenerative practice," "detestable," "unclean," and "a perversion." Same-sex marriages, according to Jeffress, are "counterfeit" and "cheapen the value" of different-sex marriages.

Jeffress has also called Mormonism a "cult," and says Hinduism, Buddhism, and Islam are also.

Attendees to the opening celebration of the U.S. embassy in Jerusalem may also be disturbed to hear that Pastor Jeffress has said "Muhammad was nothing but a blood-thirsty warlord."

Trump is the first U.S. President to ignore decades of negotiations between Israel and Palestinians in the battle over recognizing Jerusalem as the capital of Israel. The New York Times, in an explainer on the issue, says Trump moving the embassy to Jerusalem "would almost certainly kill any viable peace deal."

Jeffress serves on President Donald Trump's Evangelical Advisory Board and is a member of his White House Faith Initiative.