Trump pulls US from Iran nuclear deal, to revive sanctions 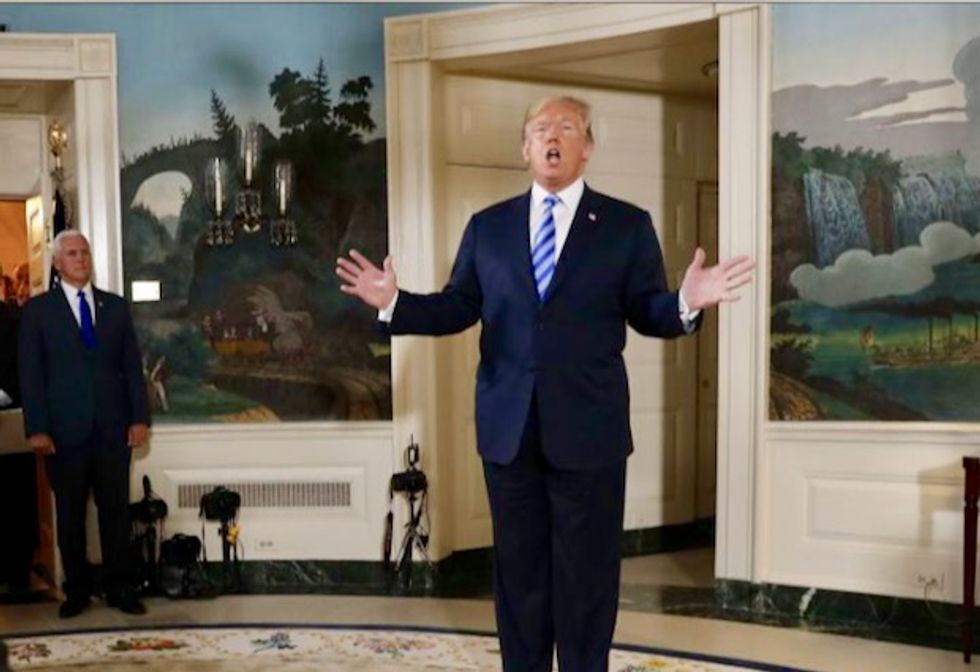 U.S. President Donald Trump reacts to a question from the media as National Security Advisor John Bolton and Vice President Mike Pence look on after the president announced his intention to withdraw from the JCPOA Iran nuclear agreement during a statement in the Diplomatic Room at the White House in Washington, U.S., May 8, 2018. REUTERS/Jonathan Ernst

President Donald Trump on Tuesday pulled the United States out of an international agreement aimed at stopping Iran from obtaining a nuclear bomb, and said he would reimpose economic sanctions on Tehran immediately.

The decision is likely to raise the risk of conflict in the Middle East, upset America’s European allies and disrupt global oil supplies.

“This was a horrible one-sided deal that should have never, ever been made,” Trump said at the White House. “It didn’t bring calm. It didn’t bring peace. And it never will.”

The 2015 deal, worked out by the United States, five other international powers and Iran, eased sanctions on Iran in exchange for Tehran limiting its nuclear program.

Trump says the agreement, the signature foreign policy achievement of Trump’s predecessor Barack Obama, does not address Iran’s ballistic missile program, its nuclear activities beyond 2025 nor its role in conflicts in Yemen and Syria.

Trump said he was willing to negotiate a new deal with Iran, but Tehran has already ruled that out and threatened unspecified retaliation if Washington pulled out.

Renewing sanctions would make it much harder for Iran to sell its oil abroad or use the international banking system.

The Iran deal may remain partially intact, even without the United States. Iranian President Hassan Rouhani suggested on Monday that Iran could remain in the accord with the other signatories that stay committed to it.

Trump’s move is a snub to European allies such as France, Britain and Germany who are also part of the Iran deal and tried hard to convince the U.S. president to preserve it. The Europeans must now scramble to decide their own course of action with Tehran.

China and Russia are also signatories to the Iran deal.

Oil prices dived as much as 4 percent on Tuesday as media reports rattled markets with doubts about whether Trump would withdraw Washington.

Trump did not provide details of what he described as the “highest level of economic sanctions” that he is reimposing on Iran.

But he implied that he was going beyond not renewing waivers on sanctions related to Iran’s oil exports and its central bank that were due to expire on Saturday and reimpose all of the other U.S. sanctions that were suspended under the nuclear deal.

Israel has traded blows with Iranian forces in Syria since February, stirring concern that major escalation could be looming.