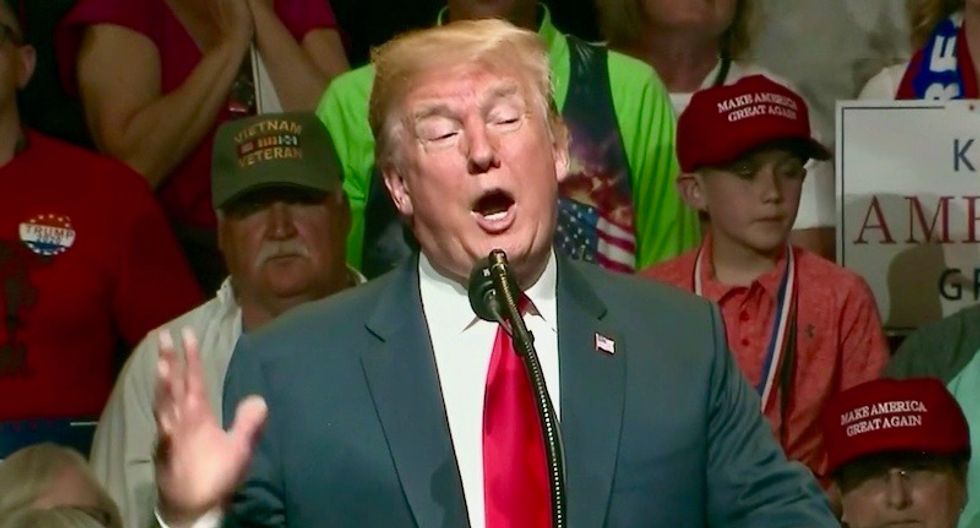 Why does Donald Trump lie at a historic rate, including so many whoppers from inflating the crowd size at his inauguration to pretending he was spied on by the Obama administration?

The New York Times went deep into Trump's long history of spinning conspiracy hokum in a deeply reported piece on Monday, concluding that it's part of his essential nature.

"It is a vital ingredient in the president’s communications arsenal, a social media-fueled, brashly expressed narrative of dubious accusations and dark insinuations that allows him to promote his own version of reality," write reporters Julie Hirschfeld Davis and Maggie Haberman. "Students of Mr. Trump’s life and communication style argue that the idea of conspiracies is a vital part of his strategy to avoid accountability and punch back at detractors, real or perceived, including the news media."

The piece quotes his biographer, Gwenda Blair, who says it's about reinforcing the idea that you can't believe anything.

"He has sold us a whole way of accepting a narrative that has so many layers of unaccountable, unsubstantiated content that you can’t possibly peel it all back.”

The Times talked to former Trump aides who spoke privately because they "did not want to embarrass him," who said that Trump is paranoid and "predisposed" to think events are being driven by secret groups of people. He refused to use the term “Deep State” for a long time, "partly because he believed it made him look too much like a crank."

The story quotes a number of lawmakers by name and includes a devastating assessment from Erick Erickson, the founder of the conservative website RedState.

“A lot of people really want to believe a conspiracy because it’s a lot easier to think a malevolent force is in charge than that our government is run by idiots,” he said.