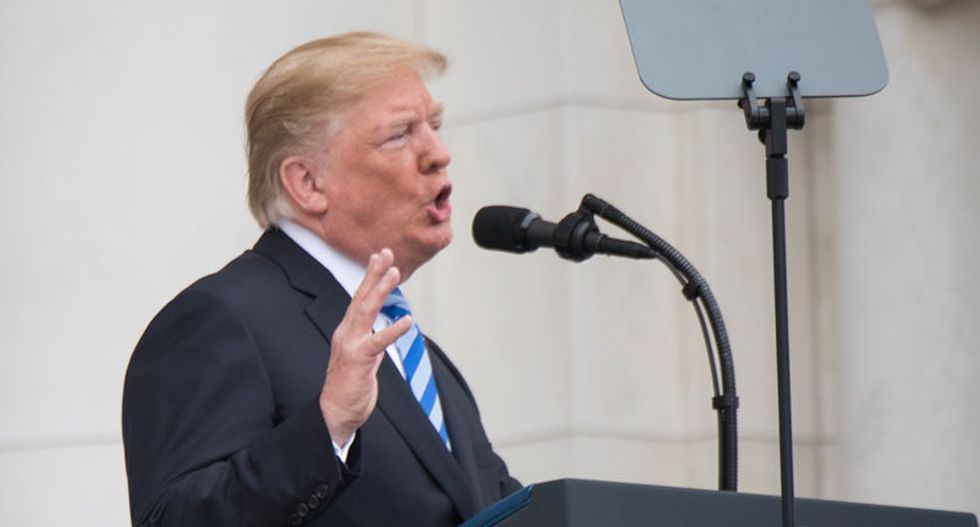 How that the midterm election campaign is finally rolling we will undoubtedly start hearing a whole lot about polls again. Not to worry, Nate Silver at 538 assures us that contrary to popular myth, polling has not fallen apart and is as reliable as it's ever been — which is to say, fairly reliable. Silver and his crew have done a thorough analysis of the various organizations if you are a polling junkie. The rest of us will do fine by just checking the polling averages at the various websites that aggregate them all.

But one of the difficult things to measure in standard polling is enthusiasm.

Pollsters do ask the question and try to quantify intensity but who knows how people are going to feel months from now, right? So far, the off-year and special elections over the past year have shown a substantial advantage in enthusiasm for the Democrats and they've had much greater success at the ballot box than the Republicans. Democratic voters have very intense feelings about Donald Trump and the direction of the country and since midterms are almost always a referendum on the president, that's probably a good sign for the proverbial "Blue Wave" that everyone is anticipating to crest in November.

But while the Democrats may be galvanized and motivated to take back Congress in order to stop Trump's legislative agenda and provide the oversight that the Republicans have irresponsibly abdicated in order to cover up their leader's misdeeds and malfeasance, that's not the whole story. The GOP is deeply in thrall to Donald Trump, the base voters never waver in their devotion no matter what he's done. They may just not be as enthusiastic about voting for their own Congressional representative, and that's where the president comes in.

Trump's going to hit the campaign trail tough this fall and if his Tennessee rally on Tuesday is an example, he's taking off the gloves. And if those rally-goers are any example he hasn't lost his ability to bring them to screaming ecstasy.

Both Politico and the New York Times had stories yesterday about Trump's campaign plans. Politico headlined theirs, "Trump’s new midterm strategy: Outrage." They report that Trump will brag about his alleged accomplishments, of course. That goes without saying. But mostly it's going to be about attacking the media and immigrants, with a focus on the violent street gang MS-13.

There is evidence that Trump's attacks on the media have already born fruit, via Politico:

GOP campaign strategists say they need to close the intensity gap with Democrats, who are anticipating an anti-Trump wave .Stoking outrage has proven effective. An October POLITICO/Morning Consult poll found that 76 percent of Republicans think the news media fabricate stories about Trump. And a Poynter Institute study last year found that more than 60 percent of respondents who supported Trump believe that the media is the “enemy of the American people.”

The New York Times reported that Trump was going to target red-state Democratic senators specifically with his red-meat message:

In both his own campaign and a series of special elections since, Mr. Trump has been far better equipped to knock down a rival than to lift up an ally. The hope now is that his savage attacks, penchant for mimicry and resourcefulness in nickname creation — recall “Lyin’ Ted” and “Little Marco” — can be turned to devastating effect on the very Senate Democrats who have gone to lengths to avoid publicly breaking with him.

“He’s the definer in chief,” said Rob Collins, who ran the National Republican Senatorial Committee when the party took back the chamber in 2014. “He comes in, defines the opponent in a way that’s unconventional and unorthodox, but it sticks.”

Calling him the "definer in chief" is a nice way to say that he comes up with puerile insults that his followers adore and repeat like parrots.

But unlike the Democrats, Trump himself is not shying away from talking about impeachment. Indeed, he is going out there and saying directly that if Republicans don't get off the couch and vote the Democrats are going to run him out of office. Normally, a politician would not introduce a subject like that for fear of creating a question in anyone's mind that there might be some legitimacy to such a move. But that's where Trump's strategy of impugning the integrity and patriotism of the Justice Department, the Special Prosecutor, the Intelligence Community and the normal congressional oversight process comes in.

He's already declaring the whole thing is "rigged," just as he did during the campaign, and even tweeting that the "13 Angry Democrats" of the Mueller investigation will be "meddling in the midterms." As I pointed out the other day, Trump's TV lawyer Rudy Giuliani openly admitted that their legal strategy is to delegitimize the prosecutors among Republican voters in order to taint the jury pool.

According to a recent CNN poll just 17 percent of Republicans give Mueller a positive approval rating down from 29 percent in March. You'll recall that the president didn't mention Mueller's name or the Special Prosecutor's office until fairly recently.

If Trump's Nashville rally on Tuesday was indicative of how he plans to campaign we're in for some very energetic racial demagoguery. He attacked Jay Z for his "filthy language" (which, coming from the man on the Access Hollywood tape, is rich) and his crowds seem even more aroused by the immigration issue than they were in 2016.  You'll recall that he was criticized recently over a discussion in which he called gang members "animals" in such a slippery way that it was obviously meant as a racist dog-whistle he intended to apply to ordinary undocumented workers as well. Just last week he said of unaccompanied children at the border, “they look so innocent. They’re not innocent.”

This is not entirely new, of course. He said much the same about Syrian refugee children and he has always engaged in the most lurid, bloodthirsty rhetoric about Muslims, undocumented immigrants and inner city gangs. He gets very intense and focused when he's ranting about "blood-stained killing fields" and people who are "savagely burning, raping, and mutilating" in vivid detail on the stump.

But even his crowd seemed a little bit thrown by where he went with it in Nashville. Others were appalled:

Nonetheless, the crowd all dutifully yelled "animals!" when Trump introduced his sickening new call and response and spoke of our country as if he's liberated it from an invading horde:

Whatever is wrong with America he alone can fix it with his "big beautiful hands":

Trump brags about the size of his hands. "We'll build new strength into our country, new hope into our communitie… https://t.co/9WBbyR3VOx
— Aaron Rupar (@Aaron Rupar) 1527642617.0

That's a very disturbed demagogue who is just letting his id run wild. The question is how many people Trump can inspire to get up off their couches and vote in November with this ugly message. And what will they do if they lose?
Opinion
Report typos and corrections to: corrections@rawstory.com.