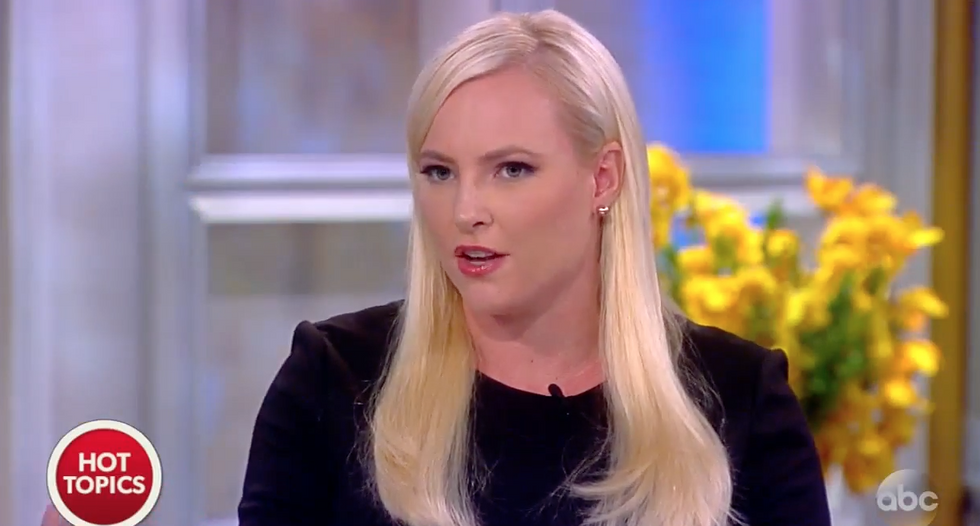 The hosts of "The View" had no idea what musician Kanye West was thinking during his TMZ interview Tuesday, but they're concerned on many levels.

West was raked over the coals by a staffer after trying to claim African Americans were enslaved by choice.

Whoopi Goldberg began by giving her own history lesson explaining to West the realities of America's past.

"Kanye, look. there are -- there were laws that were put in place that said we were less than human," she said. "So, when you have laws that say you are less than human, they don't let you in the room. they don't let you in the door. you were meant to live in a different way. Like an animal oftentimes. So, you have to keep in mind that as we come around and fix these laws and say, 'Listen, it's not okay for you to tell me I can't vote. I'm going to fight.' And white folks got on board, and everybody got on board and said, 'We're all American citizens and should be able to vote. That should be able to change.' You change the laws and you change the mentality."

She went on to say that West can't pretend like slaves were hanging out thinking that indentured servitude was "really comfortable."

Sara Haines tried to explain that there are debates going on about "why" things were allowed to happen, but it isn't possible to debate what actually occurred in history.

Co-host Joy Behar agreed noting that West tried to argue that in 400 years no one escaped, which is factually inaccurate.

Plantations were "in the middle of nowhere, you know?" she said. "So, it really looks like it would be very difficult to escape, and if you did try to escape -- he talks about 400 years and nobody escaped I guess. People tried to escape all the time. They were killed. They would get caught, killed, beaten up and brought back."

The panel brought up Harriet Tubman and the Underground Railroad along with years of abolitionist fighting to smuggle to safe areas.

The most egregious part of West's statement, according to Sunny Hostin is that it flies in the face of years of institutionalized racism that people of color continue to fight today.

"I'll never forget what my father told me," she began. "I was born in 1968, and he said, 'You are the first person in our family that has civil rights.' And he told me that ten years ago. I thought, my God. I'm 40 years old and I'm the only person in our family that enjoys the full promise of our Constitution of our flag. Are you kidding me? So, the fact that Kanye West is being taken literally by people, you know, that he is a spokesperson for African-Americans, I think is really disturbing. really, really disturbing."

She also noted that her son wondered if West was "stunting" because he has a new album coming out. She said that if true, that makes things even more dangerous.

"Because he is using slavery and to presentation of the oppression of African-Americans to profit," she continued. "Is this a stunt?"

Meghan McCain, however, wondered if there was more afoot. She noted that beyond the talk of slavery, West rambled on about a number of topics including his drug addiction, liposuction and other topics.

"It looked like someone having some kind of breakdown," she said. She described it as similar to the video of Britney Spears shaving her head.

The View Video Whoa!
Report typos and corrections to: corrections@rawstory.com.

In Utopia and elsewhere in Texas, school teachers carry guns

In a tiny Texas town called Utopia, a sign at the entrance to its only school warns that staffers are packing guns -- a measure designed to prevent shootings like the one that left 19 kids and two teachers dead down the road in Uvalde.

Utopia is a speck on the map in the giant Lone Star state, a hamlet of 200 people tucked away among hills and fields. It's just a few streets, its main drag boasting a handful of stores and not much else.

Also in a 2-1 decision, in April, the judges representing the U.S. District Court for the Southern District of Ohio Eastern Division had set May 28 as the deadline for the commission to come up with a viable plan before the federal court would intervene to implement Map 3, which passed along partisan lines by Republicans on the commission in February and has been rejected twice by the state supreme court as unconstitutional. The court issued their ruling May 27 with it taking effect at midnight Saturday.