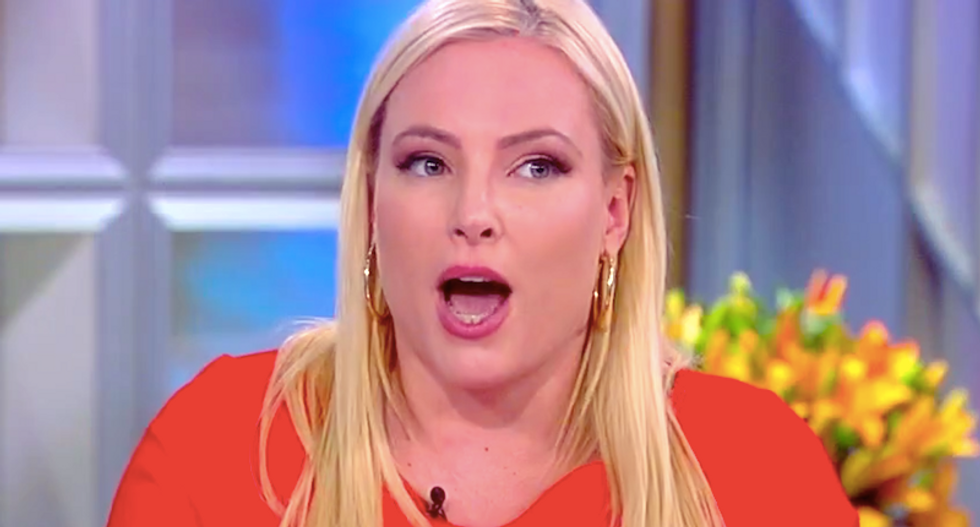 "The View" host Meghan McCain put words in singer Kelly Clarkson's mouth -- and was promptly shut down by her co-hosts.

Clarkson refused to mark a moment of silence Sunday at the Billboard Music Awards for the victims of a school shooting last week in Santa Fe, Texas, saying that action and change were needed instead.

"We've had this conversation before, we're always talking about gun control," McCain said, unwittingly making an argument in favor of gun control.

"We said before, okay, AR-15s, all semi-assault rifles, if they are banned, this won't happen -- that's obviously not accurate in this case," McCain said. "He had a pipe bomb, a Molotov cocktail and a carbon dioxide device, which, by the way, are things you can make in your house, like, especially a carbon dioxide device, things you can find off the internet and make bombs."

The conservative host then gave Clarkson a backhanded compliment.

"Kelly Clarkson, I admire anyone who wants to go out and take a platform and speak on this issue but, for me, I was also, like, what does change mean to you?" McCain said. "Because she said, 'I'm a proud gun owner, I have a concealed handgun license,' in 2012 she says she has nine guns -- more than me, which is a thing -- and sleeps with a Colt 45."

"Are you now -- I'm curious, someone like that -- are you now for repealing the Second Amendment?" McCain added.

Her co-hosts quickly slapped down her claim about Clarkson's motivations.

"I don't think she's saying that," said host Whoopi Goldberg, as the other co-hosts voiced their objections to McCain's statement.

Co-host Sara Haines said mass shootings drive Americans into their own corners, politically, and McCain insisted she would never do that -- and promptly steered the conversation away from gun safety measures.

"A lot of times it's jumped to that, that's the thing," McCain said. "Not at this table, but other people, you know, in the media, it is jumped to automatically. I would also like to say, what is is about -- I know we don't want to talk about mental illness, but what is it about young boys in our culture who are rejected by girls, which is what happened in this specific situation, and your only option is to somehow go and commit a massacre at your school?"