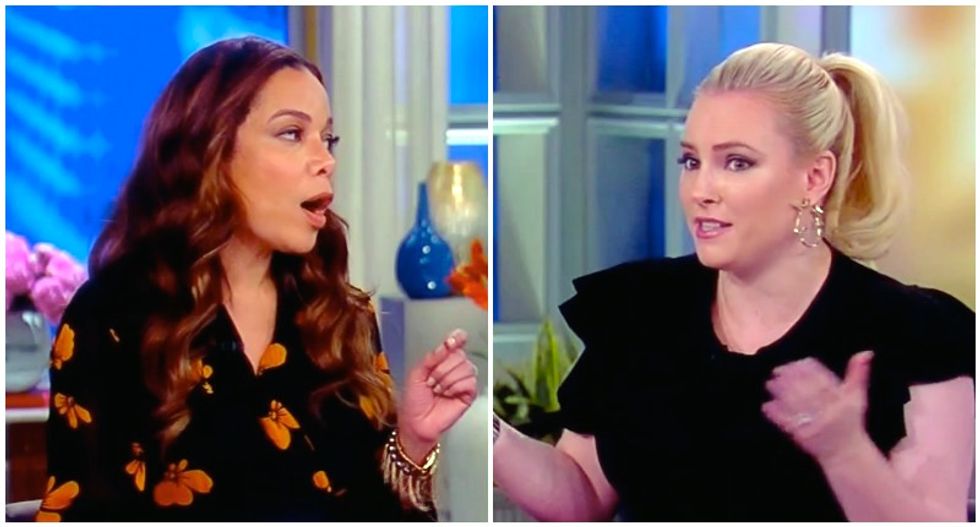 "The View" host Meghan McCain insisted there was no such thing as women's issues in politics -- but co-host Sunny Hostin tried to help her understand why she was wrong.

The panelists roundly panned a tweet by White House press secretary Sarah Huckabee Sanders about Gina Haspel, the newly sworn-in CIA director, saying that Democrats were "losing their war against women in the Trump administration."

McCain said the tweet "frustrated" her because she said conservatives are always "railing" against "identity politics."

She complained that Democratic women such as Hillary Clinton, Madeleine Albright and Michelle Obama had used strong language to urge women to vote against Donald Trump, saying they should not have used gender as an election issue.

"All of these things, I felt a lot of pressure, like, 'Oh, my gosh, if I have a uterus I have to vote for a woman," McCain said. "So it's hypocritical for the administration on the other side to come out and say Gina Haspel is amazing because she's a woman. We should be picking the best candidates, period, across the board for everything."

Hostin disagreed, saying that she believed more women should hold positions of authority.

"I know my position has always been that, you know, women should support women because the stats make it very clear that when women are in office women, issues are in the forefront," Hostin said.

McCain said women voters should focus less on domestic social issues and more on the types of issues her father, Sen. John McCain (R-AZ), was known for championing.

"A woman's issue for me is terrorism, we've talked about this many times on the show," McCain said. "For me, my women's issue is foreign policy, No. 1, 2, 3, 4, 5. But the idea that Planned Parenthood is the No. 1 women issue for women in America, always -- it's just false, and I'm sick of this."

Once Hostin was able to get a word in edgewise, she explained that some political issues specifically mattered to women in ways they do not to men.

"There are issues that are specific to women, and women legislators are more likely to introduce legislation that specifically benefit women, and that's just a stat," Hostin said.

"If you go into midterm elections with that message it's not going to be the 'blue wave' you think it will be," McCain said. "It worked so well in 2016."

Hostin said that was her message, not a political party's -- and asked for a chance to finish her thought, but host Whoopi Goldberg heeded a producer's request for a commercial break.