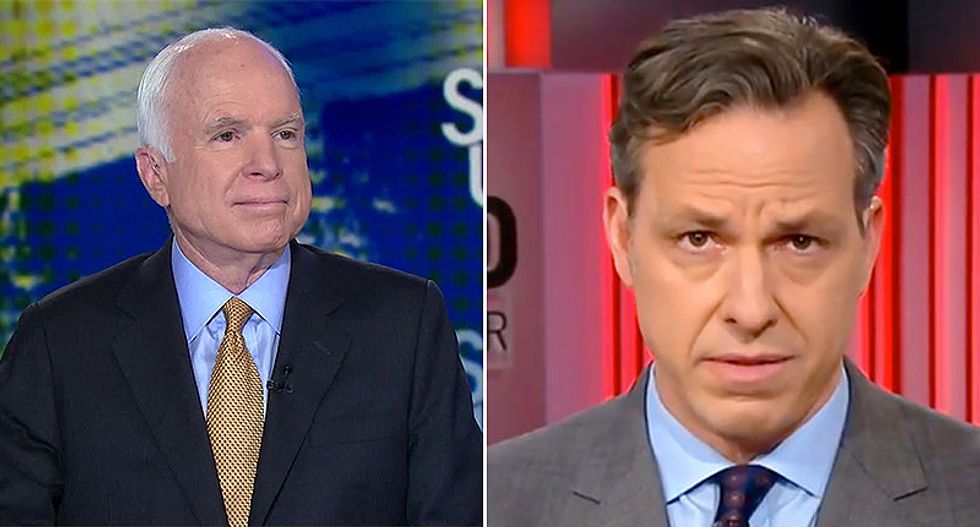 During an appearance on Fox Business Network Thursday, military analyst Thomas McInerney launched a crass attack on Sen. John McCain (R-AZ), who was a prisoner of war during the Vietnam War. It was enough to send CNN host Jake Tapper into full attack mode.

“The fact is, is John McCain — it worked on John,” McInerney suggested, when speaking about the use of torture on prisoners. “That’s why they call him ‘Songbird John.’ The fact is those methods can work, and they are effective, as former Vice President Cheney said. And if we have to use them to save a million American lives, we will do whatever we have to.”

"OK, first of all, no one calls him 'Songbird John' except crazy people and jerks," Tapper said of McInerney's insults. He noted he was using his words carefully, indicating he would like to say something more inflammatory.

McCain spent more than five years in a POW camp in North Vietnam after his Skyhawk dive-bomber was shot down in 1967. McCain was brutally beaten as a POW after suffering severe injuries when his plane crashed. As PolitiFact reported, there is no evidence that McCain ever said anything that would have betrayed his country. In fact, McCain was given an opportunity to leave the POW camp and be sent home, but refused unless his other fellow captives were also released.

McCain came out against Gina Haspel, President Donald Trump's nominee to lead the CIA, because of her involvement in torture tactics used in wake of the attacks on September 11. The senior Arizona senator is suffering from a rare and aggressive form of brain cancer that has a very low survival rate.