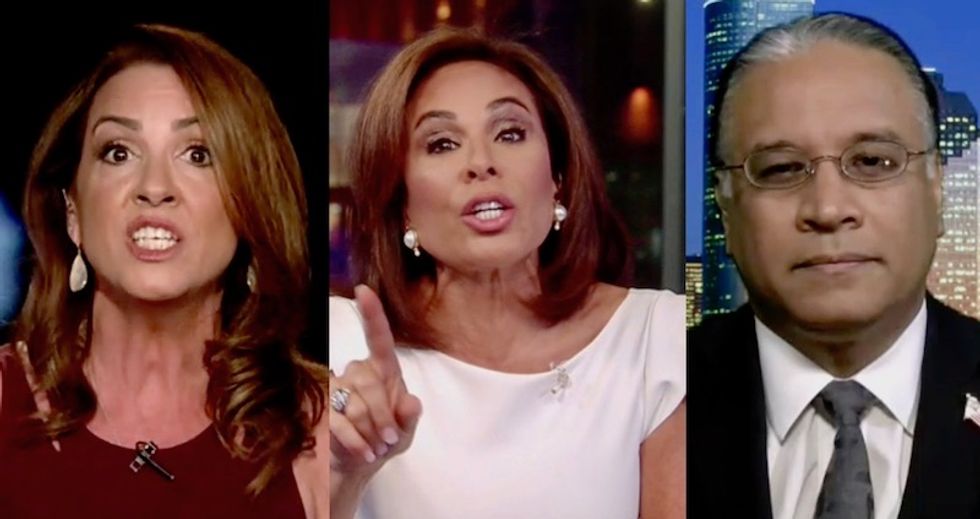 Fox News host Jeanine Pirro had a testy exchange with a guest on Saturday night, as a dicussion of the North Korean negotiations derailed into an argument about Trump's possible collusion with Russia to steal the 2016 election.

The segment opened with Pirro praising Trump on the negotiations, which appear to be on again after Trump's abrupt cancelation.

"He's already got three hostages back, something Obama couldn't do," Pirro said. (Obama couldn't free the hostages this because two of the three were taken in 2017, after his presidency ended.)

"I see him tweeting quite often," Tameez said, urging Pirro to tell the president to focus on the upcoming negotiations.

"Let me tell you something about Donald Trump, he can do tailspins around anyone," Pirro said. "The guy doesn't sleep. He works 24 hours a day."

Things really went off the rails when Tameez started repeating basic facts about the Mueller investigation and the timeline of events in the campaign.

He then explained that 18 Russians have been indicted and six other people have pled guilty.

"That has nothing to do with Russia!" screamed Carter.

"I think President Trump is distracted by these things," Tameez said. "We have to focus on what's really important."

"You know what, cut it out! Cut it out!" Pirro yelled. "I'm not going to listen if you don't answer my question."

"All the evidence shows that the FISA warrant was based on real evidence," he said, explaining that Australian intelligence had flagged the contacts.

"There is no proof that anybody in the Trump campaign ever colluded or did anything with the Russians!" yelled Carter.