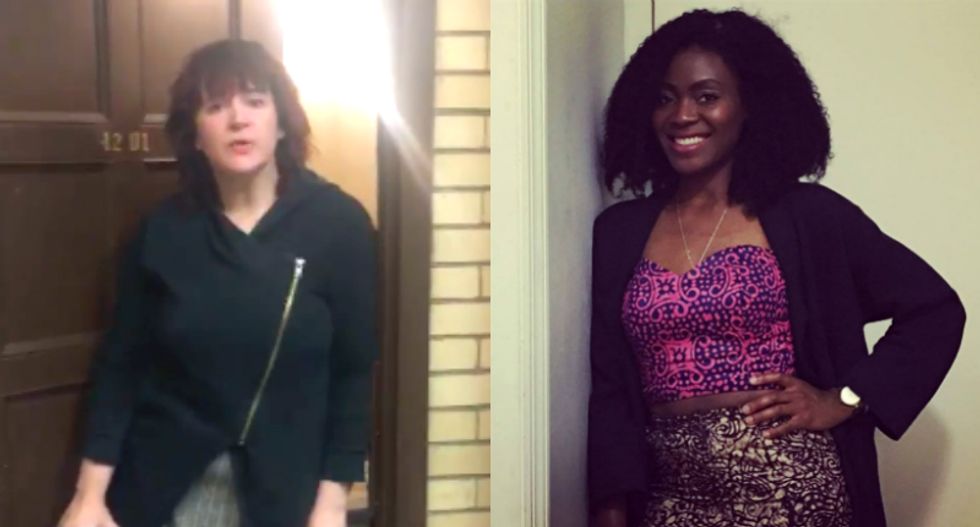 Yale graduate students Lolade Siyonbola (right) and the classmate that called the police on her (left). Images via screengrab and Siyonbola's Facebook.

A white Yale graduate student reported one of her black classmates to campus police for napping in a dorm common room — and the student was interrogated for 15 minutes because her name was misspelled in the school database.

Yale Daily News reported that graduate student Lolade Siyonbola's videos of the incident, which include her interactions with the woman that called campus police on her as well as officers themselves, went viral on campus as the campus community debated whether she was the target of discrimination and harassment.

The first of the two videos shows the white woman shortly after she called the police. According to Siyonbola, the woman called campus police months prior after one of the black student's friends got lost in her building.

"I have every right to call the police," the defensive white grad student said as she filmed Siyonbola filming her.

The second video, which was initially posted as a livestream, shows Siyonbola's interaction with campus officers as they ask her to see identification.

"We need to make sure you belong here," a female officer told her.

“I deserve to be here," Siyonbola asserted after one of the officers told her to "sit tight" as they run her ID. "I paid tuition like everybody else; I am not going to justify my existence here."

The confrontation continued for more than 15 minutes as police struggled to verify that Siyonbola was a student, ultimately acknowledging that her name was misspelled in the database. When Yale Daily News reached the Yale Police Department for comment, they defended the officers' actions and said they were following "protocol."