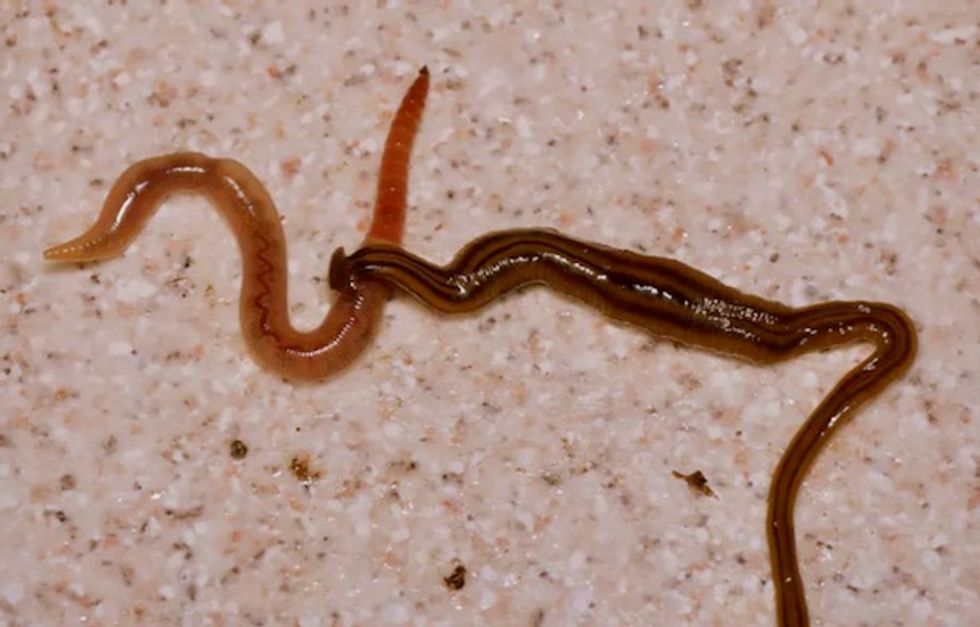 A giant worm Bipalium kewense, prepares to kill and eat an earthworm. Pierre Gros, CC BY

One of the consequences of globalisation and increased international trade in goods is the introduction of invasive species. In France, we have seen recently the arrival and proliferation of the “devil bug”, the Asian hornet and the Siberian chipmunk, as well as land flatworms such as Platydemus manokwari (from New Guinea) and Obama nungara (from South America).

These flatworms, which move from continent to continent as plants and soil are transported, are generally of modest size, about 5 cm long – they can be held in the hand, although it is a bad idea to touch them. Among them, however, is a group of “giant” species, all of which have a “hammerhead”: the bipaliines, belonging to the genera Bipalium and Diversibipalium. The largest can reach 1 metre in length, and are mostly from Asia.

Our team has just published the results of five years of work with the help of citizen scientists, who sent us photographs and also specimens. More than 700 reports of land flatworms were received, of which more than 100 were bipaliines. Two of the species present in France, and sometimes very abundant, can reach 40 cm long. Think about this before you continue: if you’re reading this article on your laptop, 40 cm is easily longer than your screen is wide… 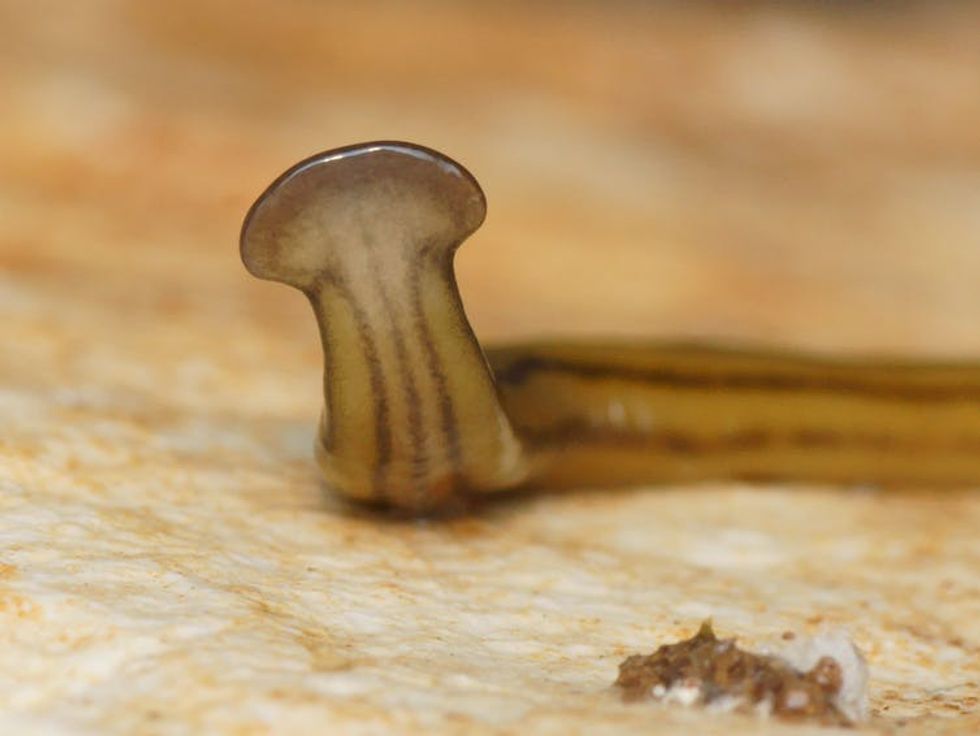 The head of Diversibipalium multilineatum. This species can reach 40 cm in length.

Land flatworms consume soil fauna and pose a threat to soil biodiversity and ecological balance. Species of Bipalium feed on earthworms, and are able to kill and eat prey much larger than themselves. To do so, the Bipalium have a chemical armament including tetrodotoxin, one of the most powerful neurotoxins in the world, a thousand times more so than cyanide. Tetrodotoxin is the weapon of choice of the fugu, the poisonous fish beloved in Japan and eaten very carefully.

While our survey of land flatworms was originally intended only for mainland France, we received reports from the French overseas territories of Guadeloupe, Martinique, Saint Martin, Saint Barthélemy, French Guiana, Réunion, Mayotte and Polynesia, as well as from countries such as Switzerland, Monaco and Portugal. Unexpectedly, some of the citizens’ testimonials date back 20 years, as volunteers sent us older photographs and even videos from as far back to 1999. 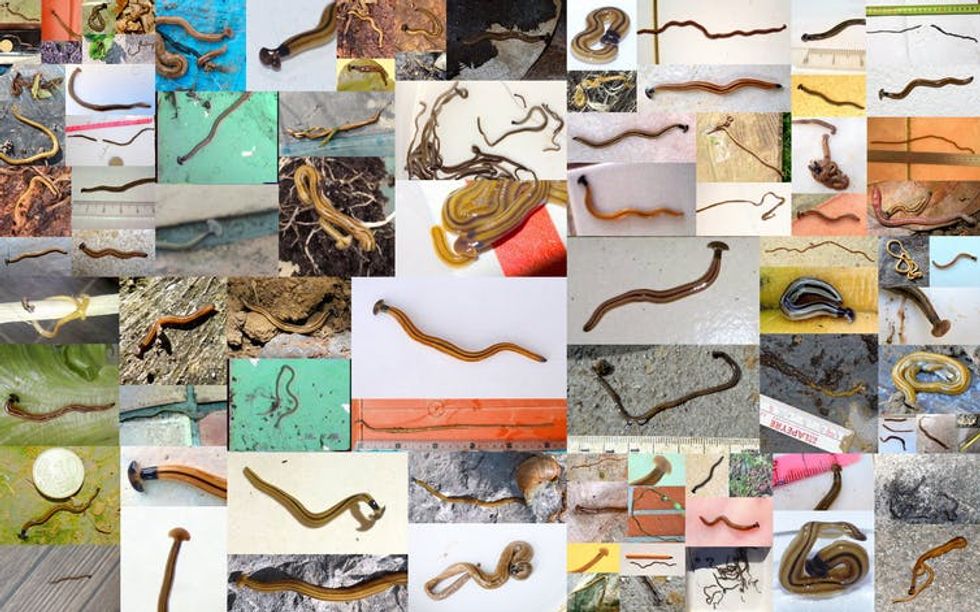 In France, the two dominant species are Bipalium kewense and Diversibipalium multilineatum, which can reach 40 cm in length. Curiously, Bipalium kewense was also found in Guadeloupe, Martinique and French Guiana. A relatively small species, Bipalium vagum, has been found in several islands of the West Indies, French Guiana and Reunion, but not in metropolitan France. An unknown species, “black” Diversibipalium, was found in France, in a single location. A probably new species, “blue” Diversibipalium, was found only in Mayotte; this species is particularly spectacular with its iridescent turquoise colour. 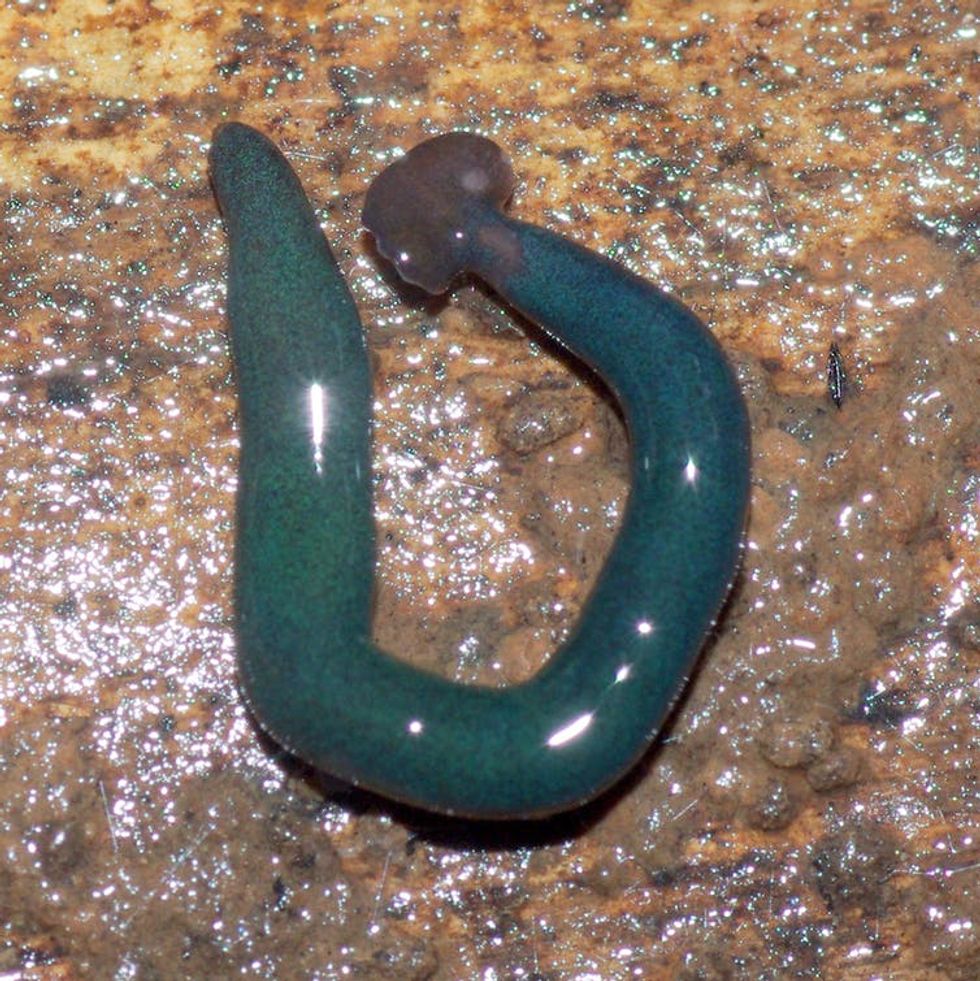 ‘Blue’ Diversibipalium, found only in Mayotte.

The Pyrénées-Atlantiques, a small paradise for giant worms…

In France itself, most of the bipaliines were found in the south, but very curiously, almost half of the reports come from a single department: the Pyrénées-Atlantiques, especially in the coastal area between Bayonne and the Spanish border. Land flatworms, which come from the semitropical regions of Asia, have two enemies: cold in winter and drought in summer. It seems that the Pyrénées-Atlantiques, with their mild winters and never-quite-dry summers, are a little paradise for them. 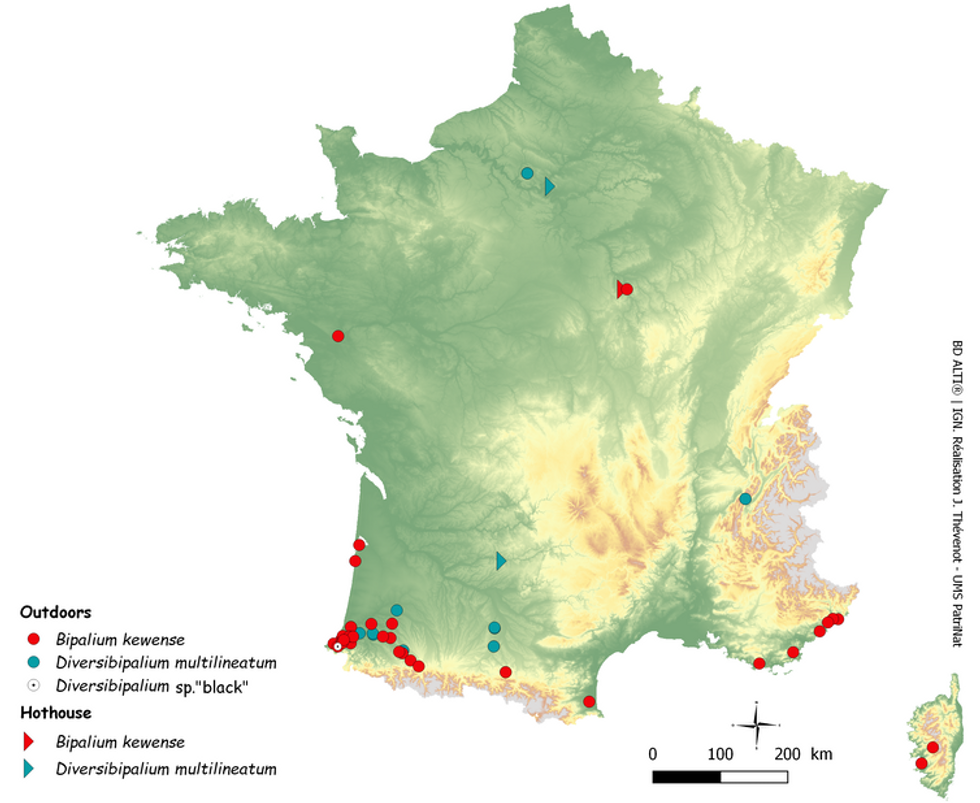 Reports of bipaliines in mainland France, obtained thanks to citizen scientists.

Our molecular studies show that species found in several localities around the world are perfectly homogeneous from a genetic point of view, even when the specimens come from several continents. These species do not practice sexual reproduction and each individual is therefore a clone of its parent: a small piece detaches from the posterior part of the animal and turns into an adult, a phenomenon called fission. Asexual reproduction is a way for an alien species to quickly invade a territory. It also means that every worm is, in a sense, potentially immortal.

Scientists should be concerned

When we started working on this initiative in 2013, we did what every scientist does at the beginning of a new project – we looked for articles written by other scientists on the subject. To our astonishment, we found almost nothing on this subject in France, even though the invasion began more than 20 years ago. It seems paradoxical that the invasion of Europe by spectacular and highly visible animals that are also potentially dangerous for biodiversity had not attracted the attention of any scientist or institution up to now. 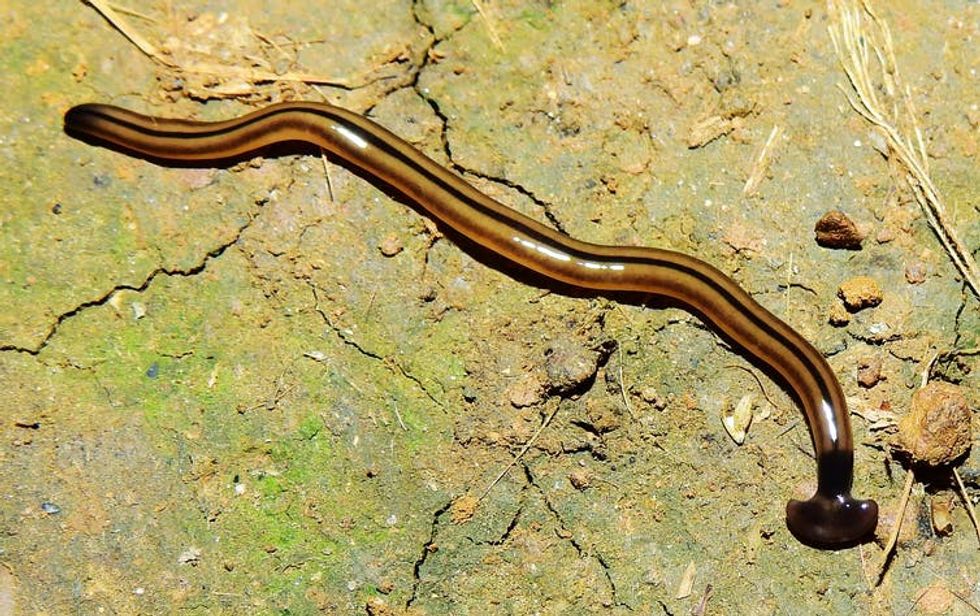 Bipalium vagum, present in most French territories in the tropics, photographed here in French Guiana.

Citizens sometimes told us about their having brought specimens to research centres or universities only to have their fanciful identifications dismissed out of hand (“These are nothing but leeches, not interesting at all”). It is clear that efforts need to be made to better educate not only the public, but also scholars about the land flatworms. That said, those who couldn’t identify them 20 years ago had an excuse – they weren’t there.

The results of our study have been published in English, as is the general practice in science these days. To inform the public in France and its overseas territories, we have also written a full version in French of our article on the bipaliines, as we did, in 2013, for the arrival of Platydemus manokwari. Now, no more excuses!

And what of France’s European neighbour, the United Kingdom? Has it been spared from such invaders? Well, yes… and no. There are not yet any reports of the giant Bipalium or Diversibipalium flatworms in British gardens, the weather likely being too cold for these semitropical animals. But one species features a scientific name with a very English origin, Bipalium kewense – in Latin it means “from Kew”, because it was described in 1878 from specimens found in a hothouse of the Kew botanical gardens, near London. So there are giant flatworms present, but probably only in the hothouses. Other invasive flatworms have made the UK their home, however, including the New Zealand flatworm, Arthurdendyus triangulatus, which has decimated native earthworms since the 1980s. Adding insult to injury, the British Isles are the only place in Europe where this highly destructive species is established.