'You're creating bad schools': Trump-backing teacher tells off Betsy DeVos to her face in closed-door meeting 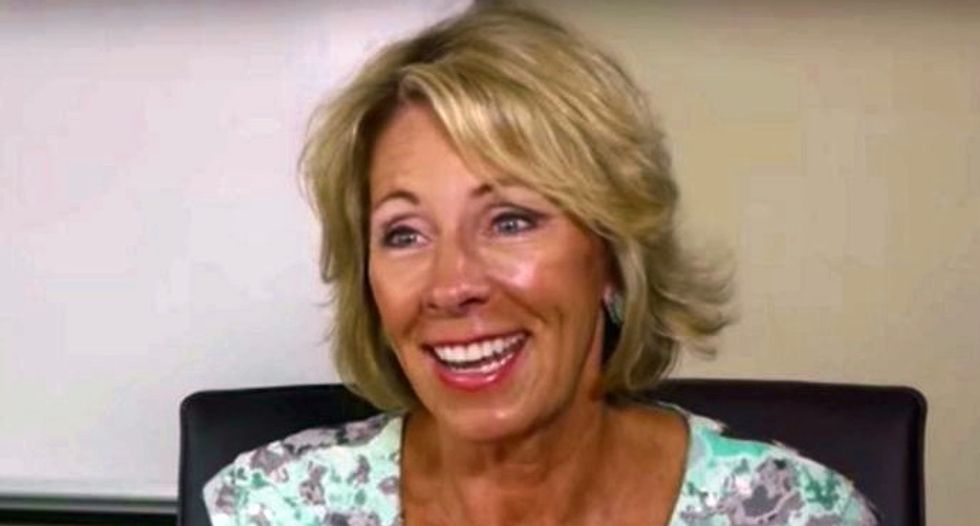 An Oklahoma teacher who voted for President Donald Trump in 2016 says that he got into a heated argument with Education Secretary Betsy DeVos during a closed-door meeting this week.

Teacher Jon Hazell tells the Huffington Post that he and 49 other teachers, who had all been named teachers of the year in their individual states, met with DeVos this week to discuss their concerns about her education policies.

In particular, he took issue with DeVos's "school choice" program, which he said drains resources out of traditional public schools and lavishes them upon private schools and charter schools.

"I said, ‘You’re the one creating the "bad" schools by taking all the kids that can afford to get out and leaving the kids who can't behind,'" Hazell told the Huffington Post.

Brian McDaniel, California’s teacher of the year, tells the publication that Hazell's comments received a lot of support in the room from fellow teachers.

Additionally, Huffington Post reports that DeVos sparked additional ire from teachers in the room when she expressed her opposition to teachers across the country going on strike to protest for more classroom resources and better pay.

"She basically said that teachers should be teaching and we should be able to solve our problems not at the expense of children," said Melissa Romano, Montana's teacher of the year. "For her to say at the 'expense of children' was a very profound moment and one I'll remember forever because that is so far from what is happening."