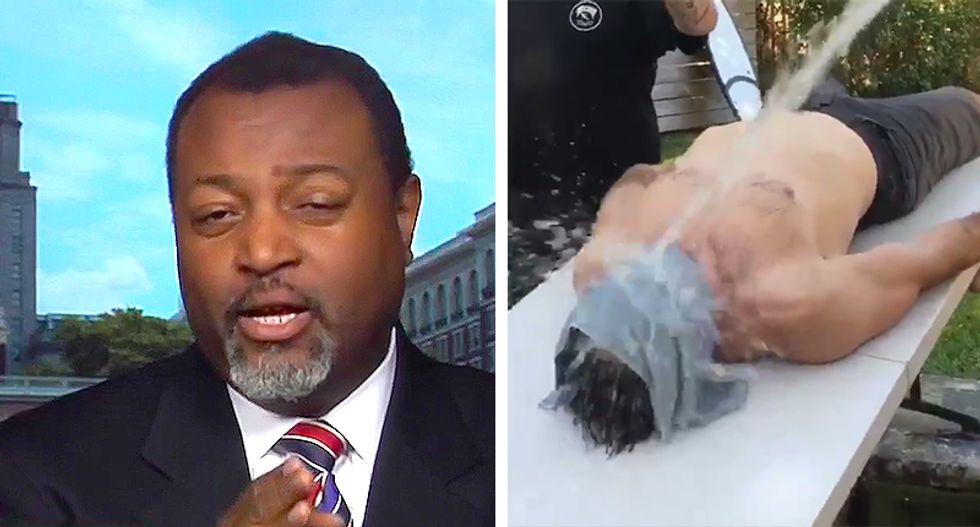 UFC Fighter Tim Kennedy posted a video of himself being what he said was waterboarding, but he didn't exactly get it right and the internet is lighting him up for being a wimp.

"We did this yesterday for almost 45 minutes," he wrote on Twitter with a video. "The average pour was anywhere from 10 to 60 sec. You can try to hold your breath but the water pools at the back of your sinuses running down your eyes and nose. Plain and simple. It’s not torture."

The problem for Kennedy is what happens after 60 seconds is over? What does Kennedy do when the water never stops coming? What would Kennedy do if he was tied down, tipped at an angle and the towel was forced over as did conservative radio talk show host Erich "Mancow" Muller, when he tried it in 2009.

"Look, all that's been done to this country, and I heard about water being dropped on someone's face, and I never considered it torture," Mueller told NPR in an interview. "Even when I was laying there, I thought this is going to be no big deal. I go swimming. It's going to be like being in the tub. I do now want to say this: absolutely torture. Absolutely. I mean, that's drowning."

Former United States Navy senior chief petty officer specializing in naval cryptology Malcolm Nance called folly on Kennedy. As someone who has keen knowledge of waterboarding, the former SERE instructor called out Kennedy for not only doing it incorrectly but not capturing the experience of interrogation.

The internet was quick to follow with their own accusations, and attacks on Kennedy for doing it wrong and for being too scared to try it the way it's actually performed by intelligence officers.

Below is a video of how the late Christopher Hitchen withstood an actual demonstration of torture. Raw Story reached out to Kennedy to ask if he would be willing to do it in the way Hitchen or Mueller did. He eventually responded saying he would "absolutely" do it. Raw Story then reached out to Nance to ask how one would facilitate it.