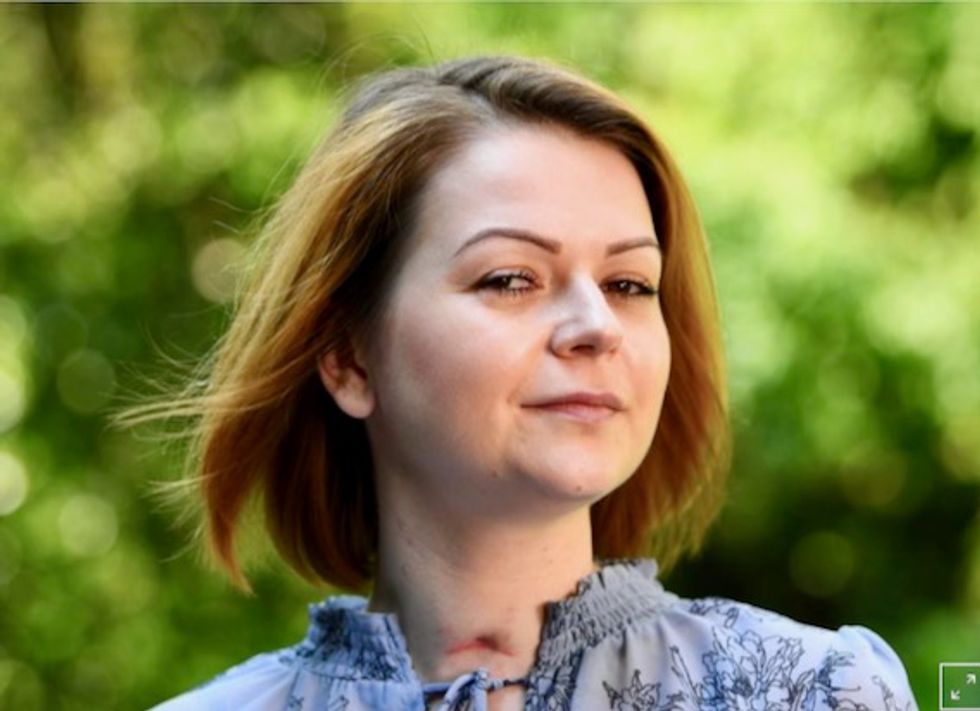 Yulia Skripal, who was poisoned in Salisbury along with her father, Russian spy Sergei Skripal, speaks to Reuters in London, Britain, May 23, 2018. REUTERS/Dylan Martinez

Yulia Skripal survived an assassination attempt that UK authorities blame on Russia. But the daughter of one of Russia’s most famous spies says she wants to return to her country “in the longer term”, despite the poisoning.

“The fact that a nerve agent was used to do this is shocking,” Skripal told Reuters in an exclusive statement. “My life has been turned upside down.”

Yulia and her father Sergei Skripal, a former colonel in Russian military intelligence who betrayed dozens of agents to Britain’s MI6 foreign spy service, were found unconscious on a public bench in the British city of Salisbury on March 4.

“I woke to the news that we had both been poisoned,” Skripal said in her first media appearance since the poisoning. She contacted Reuters through the British police.

Skripal was speaking from a secret location in London as she is under the protection of the British state. She was discharged from Salisbury District Hospital about five weeks after the poisoning and has not been seen by the media until now.

“We are so lucky to have both survived this attempted assassination. Our recovery has been slow and extremely painful,” she said in her written English statement.

“As I try to come to terms with the devastating changes thrust upon me both physically and emotionally, I take one day at a time and want to help care for my Dad till his full recovery. In the longer term I hope to return home to my country.”

Skripal spoke in Russian and supplied a statement that she said she had written herself in both Russian and English. She signed both documents after making her statement.

She declined to answer questions after speaking to camera.

British Prime Minister Theresa May said the Skripals were poisoned with Novichok, a deadly group of nerve agents developed by the Soviet military in the 1970s and 1980s. May blames Russia for the poisoning.

It was the first known use of a military-grade nerve agent on European soil since World War Two. Allies in Europe and the United States sided with May’s view and ordered the biggest expulsion of Russian diplomats since the height of the Cold War.

Russia retaliated by expelling Western diplomats. Moscow has repeatedly denied any involvement and accused the British intelligence agencies of staging the attack to stoke anti-Russian hysteria.

“We have not seen her or heard from her,” he said when asked to comment on the story.

“NO ONE SPEAKS FOR ME”

Russia’s ambassador in London, Alexander Yakovenko, has repeatedly demanded to see Yulia, who was a Russian citizen when she was poisoned.

“I’m grateful for the offers of assistance from the Russian Embassy. But at the moment I do not wish to avail myself of their services,” Skripal, who wore a light blue summer dress and bore a scar on her throat, said.

“Also, I want to reiterate what I said in my earlier statement, that no one speaks for me, or for my father but ourselves.”

Mystery surrounds the attack. The motive is unclear, as is the logic of using such an exotic nerve agent which has overt links to Russia’s Soviet past.

Russian officials question why Russia would want to attack an ageing turncoat who was pardoned and swapped in a Kremlin-approved 2010 spy swap.

President Vladimir Putin, himself a former KGB spy, said earlier this month that Skripal would have been dead if he was attacked with a weapons grade agent.

“I don’t want to describe the details but the clinical treatment was invasive, painful and depressing,” she said in Russian.

Yulia’s father was discharged from hospital on May 18. At one point doctors feared both patients could have suffered brain damage. He is no longer in a critical condition, Salisbury hospital said.

Born as a citizen of a superpower, Yulia grew up as the Soviet Union crumbled and then in the chaos that followed its 1991 collapse.

Her Facebook page says she started studying at Moscow’s School No. 63 in 1991 before gaining admission to Moscow State Humanities University in 2001, a year after Putin was first elected as Russian president.

In December 2004, her father was arrested by Federal Security Service agents on suspicion of treason: passing secrets to Britain’s MI6 intelligence agency.

Skripal, recruited by British spies while in Spain, ended up in Britain after a Cold War-style spy swap that brought 10 Russian spies captured in the United States back to Moscow in exchange for those accused by Moscow of spying for the West.

Yulia arrived in Britain from Russia at London’s Heathrow Airport at about 1440 GMT on March 3 on one of her regular visits to her father. The pair were found unconscious a day later.

“I am grateful to all of the wonderful, kind staff at Salisbury hospital, a place I have become all too familiar with. I also think fondly of those who helped us on the street on the day of the attack.”