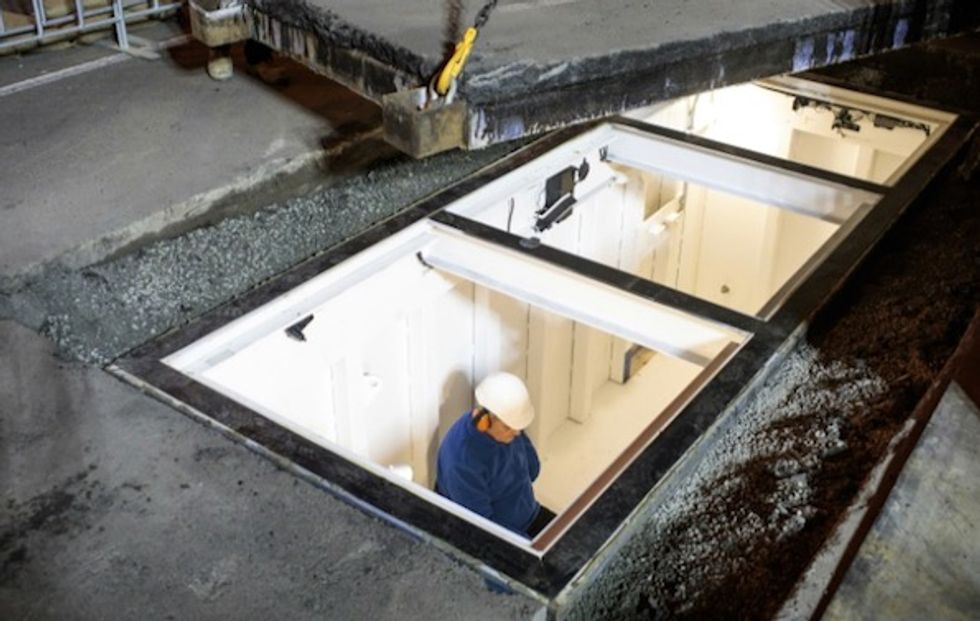 While some welcomed the feat as thought-provoking, others were left baffled DARK MOFO/AFP / Thomas HYLAND

An artist has emerged from three days entombed in a steel box under a busy Australian road in a performance billed as a tribute to victims of totalitarian violence.

Mike Parr, 73, fasted during his time underground, with oxygen pumped into the 1.7-metre (5.5-foot) by 2.2-metre container to keep him alive as traffic drove on overhead.

He had bedding, water, a waste bucket, a sketchpad and pencils for the stunt in Hobart, part of Tasmania state's annual Dark Mofo festival, which celebrates darkness through large-scale public art, food, film and music.

"The anxiety of the artist's disappearance is the point of the piece," organisers said.

It was also an attempt to highlight "the shadow cast by the genocidal violence of 19th century British colonialism in Australia", they added.

Parr, who had been buried with only a small light, clambered out of his prison on a ladder late Sunday after heavy machinery carefully removed the asphalt that had sealed him in.

He exited without saying a word or acknowledging a crowd that had gathered in the rain. He is expected to detail his experience in a public forum on Tuesday.

"He is an endurance performance artist and he's been doing this for many years, so his body is quite used to doing this," Dark Mofo curator Jarrod Rawlins told reporters.

While some welcomed the feat as thought-provoking, others were left baffled.

"People work a lifetime underground. This goose spends three days in a box doing frig all, calls it art and it makes the news," an unimpressed Rodney Gibbison said on Facebook.

James Hank de Ridder added: "If I could only get the last five minutes of my life back after watching this absolutely pointless exercise."

Parr is no stranger to controversial performances, having once used an axe to hack off his prosthetic arm, which he had filled with minced meat and blood, in front of a shocked audience.

Dark Mofo, produced by Hobart's Museum of Old and New Art, has sparked controversy elsewhere this year, drawing the ire of some Christians when inverted crosses were erected on the city's waterfront.