Why care about illegal immigrants? For one thing, they’ve become vital to key sectors of the US economy

While it may be impossible to know what Melania Trump meant when she wore a coat emblazoned with that statement during a recent visit to a children’s shelter in Texas, to many the message was clear: This administration does not care about the fate of over 2,300 or so migrant children who have been separated from their detained parents.

But it’s still worth taking the coat question seriously. Why should people care about the undocumented children Trump visited? Or, for that matter, the millions of kids and adults currently living in the U.S. without legal documents.

My work as the director of the Cornell Farmworker Program involves meeting with undocumented workers in New York, and the farmers who employ them. In my research, I’ve learned many reasons why Americans should care.

Far from the dangerous threat the president makes them out to be, undocumented immigrant workers play vital roles in the U.S. economy, erecting American buildings, picking American apples and grapes, and taking care of American babies. Oh, and paying American taxes.

So if our shared humanity isn’t enough to care, let’s examine the other reasons. 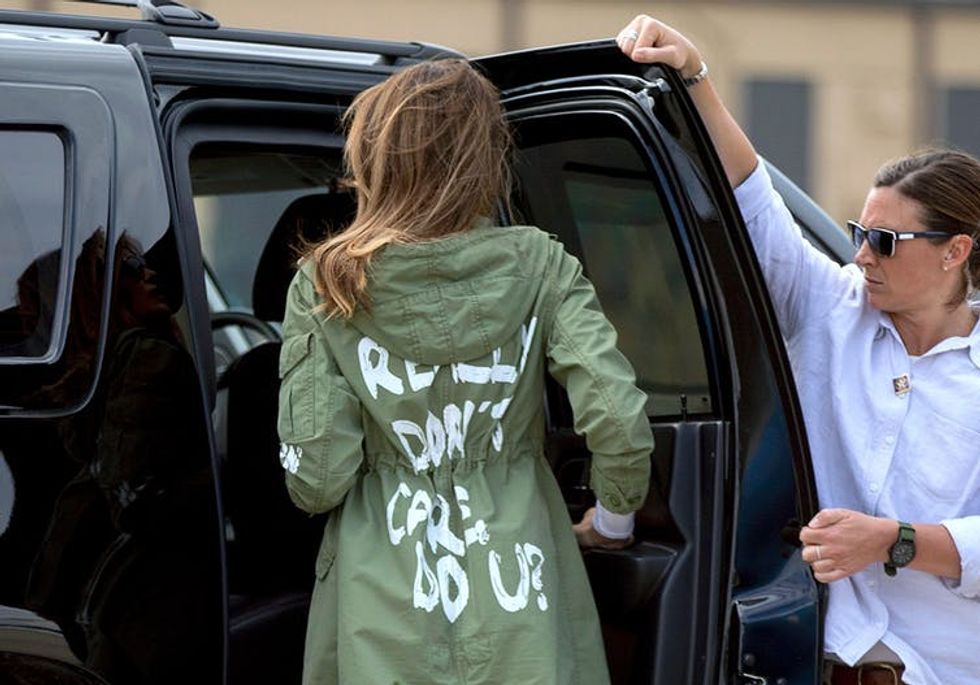 Many wondered what Melania Trump meant by wearing this coat on a trip to meet with children separated from their parents.

A snapshot of who they are

Pew Research Center estimates that about 11.3 million people are currently living in the U.S. without authorization, down from a peak of 12.2 million in 2007. More than half come from Mexico, and about 15 percent come from other parts Latin America.

About 8 million of them have jobs, making up 5 percent of the U.S. workforce, figures that have remained more or less steady for the past decade.

Geographically, these unauthorized workers are spread throughout the U.S. but are unsurprisingly most concentrated in border states like California and Texas, where they make up about 9 percent of both states’ workforces, while in Nevada, their share is over 10 percent.

Their representation in particular industries is even more pronounced, and the Department of Agriculture estimates that about half of the nation’s farmworkers are unauthorized, while 15 percent of those in construction lack papers – more than the share of legal immigrants in either industry. In the service sector, which would include jobs such as fast food and domestic help, the figure is about 9 percent.

Further studies show that the importance of this population of workers will only grow in coming years. For example, in 2014, unauthorized immigrants made up 24 percent of maids and cleaners, an occupation expected to need 112,000 more workers by 2024. In construction, the number of additional laborers needed is estimated at close to 150,000. And while only 4 percent of personal care and home health aides are undocumented, the U.S. will soon require more than 800,000 people to fill the jobs necessary to take care of retiring baby boomers.

Since agriculture is the industry that’s most reliant on undocumented workers – and it’s my area of expertise and research – let’s zoom in on it.

Overall, the agricultural industry in the United States has been on the decline since 1950. Back then, farming was a family business that employed more than 10 million workers, 77 percent of whom were classified as “family.” As of 2000 – the latest such data available – only 3 million work on farms, and as noted earlier, an estimated half are undocumented.

Increasingly, dairy farms such as those in New York rely on workers from Mexico and Guatemala, many of whom are believed to be undocumented. Currently, there is no visa program for year-round workers on dairy farms, so the precarious status of these workers poses serious concerns for the economic viability of the dairy industry.

In recent research conducted by the Cornell Farmworker Program, 30 New York dairy farmers told us they turned to undocumented workers because they were unable to find and keep reliable U.S. citizens to do the jobs. That’s in part because farm work can be physically demanding, dirty and socially denigrated work. More importantly, it is one the most dangerous occupations in the U.S.

A study commissioned by the dairy industry suggested that if federal labor and immigration policies reduced the number of foreign-born workers by 50 percent, more than 3,500 dairy farms would close, leading to a big drop in milk production and a spike in prices of about 30 percent. Total elimination of immigrant labor would increase milk prices by 90 percent.

The U.S. fruit, vegetable and meat industries are similarly at risk, and without the help of unauthorized workers, production would drop and consumers would likely see higher prices.

This has become of particular concern as immigration enforcement in agricultural communities intensifies.

Although the focus is usually on the southern border, what happens in the north matters as well, in part because the Border Patrol’s 100-mile jurisdiction means immigrants living in most of New England can be pursued anywhere. As such, the surge in immigration enforcement along the border with Canada in recent years has resulted in more farmworkers being deported.

It also has meant fresh produce has been gone unpicked, left to rot in fields. One New York apple grower told us that due to labor shortages and dwindling prices for his red delicious variety, he plans to let his 100-year-old orchard go, because any investments in production would result in significant economic loss. 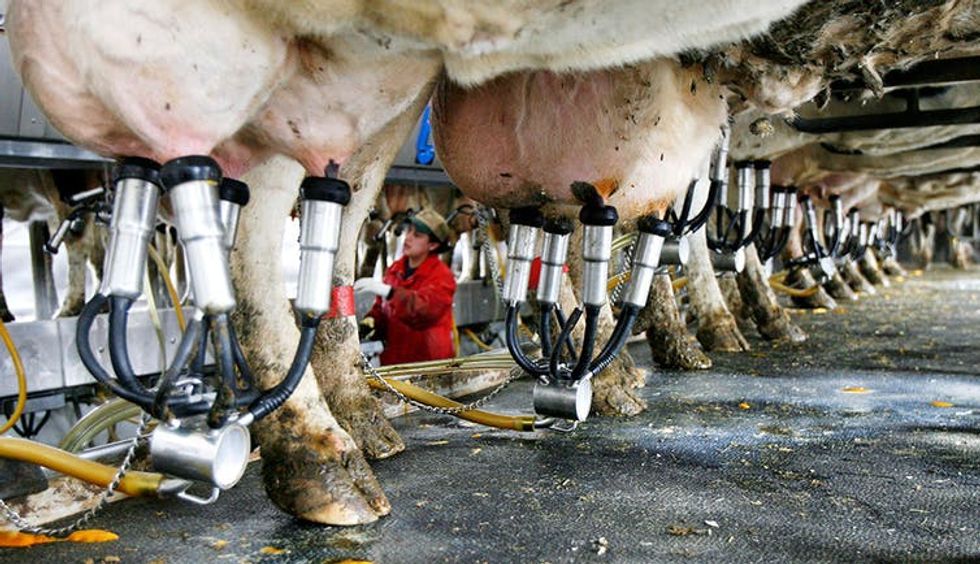 A Hispanic worker watches the milking operation at a farm in Fairfield, Vermont.

Who cares? Most Americans

Judging by the pronouncements from the White House, you might think most people don’t realize how integral undocumented immigrants are to the U.S. economy. But in fact, polls suggest that Americans do understand this, and also don’t believe that immigrants take their jobs.

In a soon-to-be-published poll Cornell conducted in 2017, we asked New Yorkers, “How do you believe undocumented farmworkers impact local communities?”

About 75 percent of those we polled said they have “generally positive impacts,” up from 62 percent in 2008. Of those who had a positive impression, most said it was because migrants fill jobs unwanted by citizens or provide essential farm help and keep prices low.

And national polling backs this up. A 2016 Pew poll found that 76 percent believe undocumented immigrants are as honest and hard-working as U.S. citizens, while 71 percent said they mostly fill jobs that Americans aren’t willing to do.

In other words, in response to Melania Trump’s coat question, not only are there lots of reasons to care, the vast majority of Americans actually do.