Catholic priest calls BS on right-wing pastor claiming Bible is about following laws: 'It was filled with civil disobedience!' 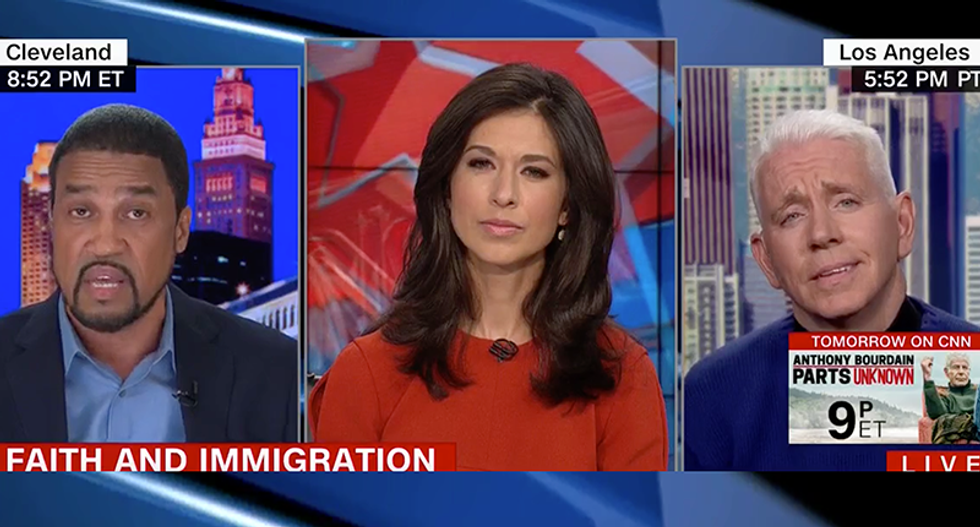 In a debate about the biblical justification for separating families at the border, CNN host Ana Cabrera asked two religious leaders what they make of the defense of the White House used for the immigrants on the border.

Father Edward Beck smacked down Attorney General Jeff Sessions, saying that he "cherry picked a biblical passage" that he took "out of context to support nefarious and diabolical governmental policy is immoral and I would say borders on sinful because of the possible I'll effects it has on others."

He explained that people can't take a text out of context to justify their own means to their own ends.

"Why does Attorney General Jeff Sessions talk about the fact that in this passage, it talks about love of enemies, the need to love one another," he said. "You have to take the full context of what is trying to be said. I think it's wrong to use the wrongly."

Rev. Darrell C. Scott, who serves on President Donald Trump's executive transition team, conceded that the Trump team has no business using the Bible to justify their actions. However, he defended the White House saying that the citation was not taken out of context and the Bible is all about following the laws of the land.

"You are to obey civil authority as long as it doesn't contradict moral authority," he said. "It doesn't contradict the moral precepts that got has instituted. You know, to bring these children in and put them at risk knowing we are apprehended, I could potentially lose my children, that's something I would have to give careful consideration to... It's breaking the law, pure and simple."

Rev. Scott attempted to justify his claim, saying "Jesus never tried to lead an insurrection against Rome" and neither Jesus nor St. Paul endorsed or encouraged civil disobedience.

"He was crucified because he was considered a threat to the Roman Empire!" Father Beck broke in. After Rev. Scott ran over the host demanding he pause for a moment, Father Beck explained that the New Testament is filled with acts of civil disobedience.

Watch the biblical smackdown below: