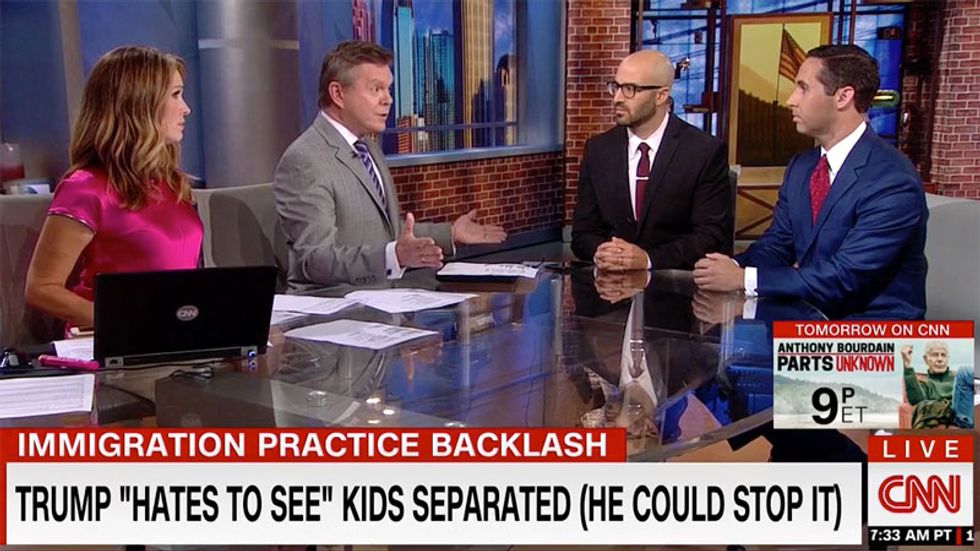 CNN panel with "Trump 'hates to see' kids separated (he could stop it)" chyron.

President Donald Trump's controversial policy of separating children from their parents at the border was compared to Nazi policies during a bonkers segment with strategists for both major political parties.

"The Department of Homeland Security now says 2,000 children were separated from their families at the Mexican border over the course of six weeks," anchor Martin Savidge reported. "The practice of splitting up immigrant families trying to enter the country is part of the Trump administration's zero-tolerance policy, a policy that Attorney General Jeff Sessions defended this week, using the Bible."

"Not surprisingly, advocates for immigrants are speaking out against the policy," Savidge continued. "The Catholic Church and other religious leaders have also criticized the policy as immoral."

CNN then played a clip of Matthew Soerens, U.S. director of Church Mobilization for World Relief, who suggested Trump's policy was "terror."

CNN anchor Christi Paul pointed out that Soerens was not the first person to describe Trump's policy as "terroristic" and asked GOP strategist John Thomas to respond.

"First of all, it hurts me these children used as political pawns basically for the left to gain amnesty," Thomas replied. "It also hurts me that adults are making bad decisions to break the law, break our immigration law, and bring their children across the border because they think they'll get citizenship that way."

"Now it needs to be solved, but I just, I hate it when you're seeing this, the convenience of this situation being used for political gain when somebody like Paul Manafort -- who's being separated from his family now -- there's no outcry," Thomas argued. "The issue is, it's politically convenient, it drives an agenda for the left, and they want to use it, rather than enforcing the law."

Manafort had his bail revoked on Friday after a federal grand jury found probable cause of witness tampering while he was awaiting trial and under home arrest.

"Paul Manafort, for one, is charged with lying and he's an adult, he's not a child who has been separated from his family, which is different for one," Paul noted. "Two, there are also allegations about President Trump himself using this as a political strategy because he's -- in a sense, many have asserted, saying, 'look at how bad this is.' Yes, we need to fix it, but the president could fix this with one phone call."

"Well, it's not that simple," Thomas claimed, of Trump reversing his new child separation policy. "You're right, if you fix that, it will encourage more illegal immigration, he understands that you can't just put duct tape on the problem because you still have a leak at the border."

"I don't think it equates to duct tape by allowing children to be with their families," Jacobson argued. "Look, bottom line, Donald Trump increasingly looks like Hitler in Nazi Germany, these look like concentration camps."

"It is cold-hearted, cruel and unusual punishment," Jacobson shot back. "The fact of the matter is you have evangelicals -- the religious right -- who have come out calling this immoral and you've got a president digging his heels in for political gain."

"It's disgusting," he added.

"John, I would say that i think David's right in this matter, no matter what justification Republicans may give, it looks reprehensible to separate young children from their parents," host Savridge interjected. "There is no good image of this."

"So politically -- and politics is about image -- this looks very bad, and you have coming this fall some very important elections coming now," Savridge reminded.