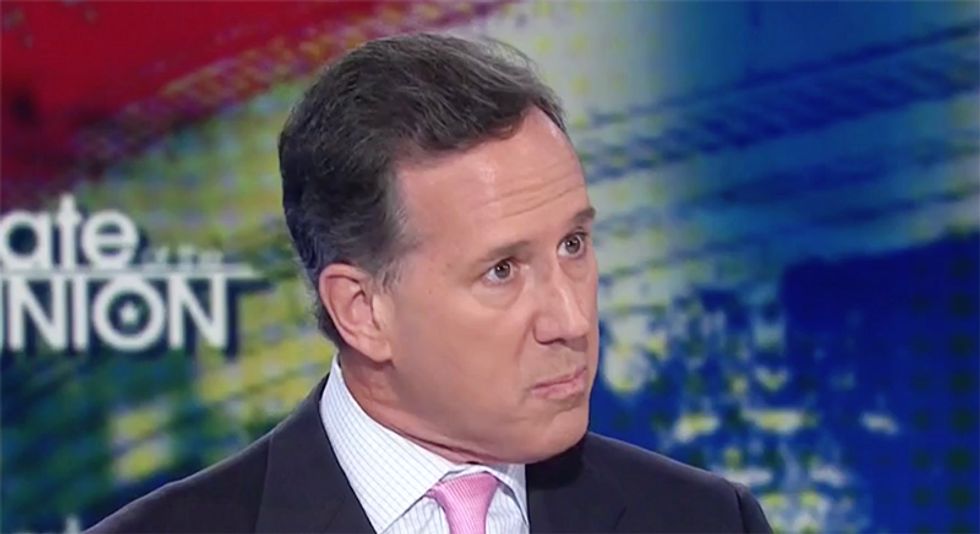 A CNN panel on immigration officials ripping children away from their amnesty-seeking parents and placing them in detention facilities, went quickly off the rails this morning when former Sen. Rick Santorum (R-PA) attempted to defend the Trump administration policy that is roiling the country.

With State of the Union host Jake Tapper asking the conservative Santorum to weigh in on the religious aspect of taking children while the Trump administration is citing the Bible as a defense, panelist Ana Navarro cautioned him, "Careful Rick, it's Sunday."

"It is gut-wrenching to see the images and understand what is going on," Santorum stated before beginning his defense. "At the same time, governmental officials have to look back and look at the consequences of what the law is. And the reality is, as [Attorney General] Jeff Sessions said repeatedly, the law is in place to make sure that we treat people fairly under the law and we have a deterrent effect."

After the entire CNN panel exploded in protest, Santorum continued, "The reality is that everybody who will be disagreeing with me on the panel is sounding very compassionate. I just say that there is a consequence to that. If you say we will take these people in, more people will come and more people will come and we will have a bigger and bigger problem at the border. You will be putting more children at risk. there are real consequences of this."

Former Michigan Governor Jennifer Granholm, passionately confronted Santorum,who was seated next to her, exclaiming, "Democrats are willing to compromise, what we do want is to be a nation who has compassion."

"You have seven children," she lectured. "If you were living in Honduras, which is the country with the highest child homicide rate, gangs, you would not leave all seven of your children there. You would want to save them. You could drive nails through my hands and whip me on my back, but do not take my children away. That to me is totally not who we are."

Santorum appeared upset at the mention of his kids, and then tried to make the point that Florida Senator Marco Rubio (R) held the key to taking care of the immigration issue, at which point the panel once again went after Santorum, pointing out that Democrats previously proposed immigration reform -- only to have Republicans shoot it down.