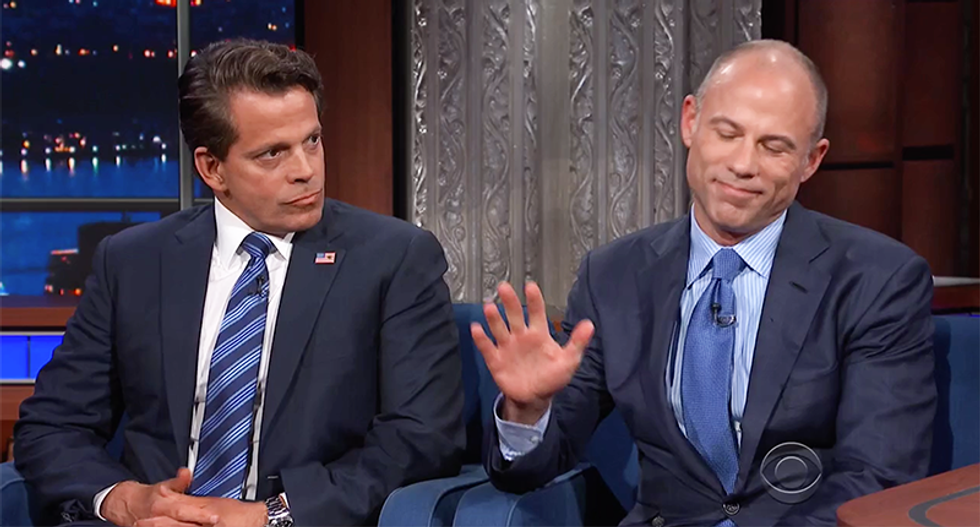 "My first question is 'What is this?' And 'Why is this?' Why are the two of you a team now?" Colbert asked about the political freak show to potentially pour out of the men's discussions. The "Late Show" host revealed that both men are pitching an idea of having the two host a television show where they debate the issues together.

"Are we a team?" Avenatti asked the man playfully known as "The Mooch."

"I didn't know we were a team," replied Scaramucci.

"Let me say two things," began Avenatti. "I don't have a lot of rules in my life. But one of the rules is I never do a show with a guy who's first name is 'The.'"

"See, I actually thought we were doing a show, and it was going to be the male version of 'Thelma and Louise,'" said Scaramucci.

"Well, this administration is certainly driving the country off a cliff right now," replied Colbert.

The host noted he knows the two have a schtick but he wanted to know the realities behind how the two men got to know each other.

"We have a mutual friend," Scaramucci said, before quickly jumping in to explain that the mutual friend is neither President Donald Trump nor Stormy Daniels.

Colbert asked the men about topics of the day, including the recent news that former Trump "fixer" Michael Cohen is no longer working with his legal team and that he might flip on the president any day.

"This is what happens when you trust your inner-most secrets to a moron," Avenatti said of Trump and Cohen's long friendship. Scaramucci, by contrast, gave a long answer that amounted to the need to "wait and see."

"Wait, wait, wait, I'm not done. I'm not done," he began. "This guy has an ego that is unparalleled. He's all about the show. He's all about the pomp and circumstance. We just saw that in Singapore. He travels to Singapore, half way around the world, spends 24 hours there, and is more interested in the red carpet and the flags flags and strolling through the garden than actually getting something done. If it was me, I'd gone over there, I would still be there, because I would have gotten a deal that mattered done instead of posing for a bunch of pictures."

For a truly hilarious tap-dancing routine, Colbert hammered "The Mooch" on whether or not Trump lied about Stormy Daniels.

"I mean, dazed and confused Rudy has no idea what he's doing day in or day out," he continued. "And I do not believe that it is possible that this is premeditated. And if it is premeditated, it's even worse than we could all expect."

When it comes to the memo that Trump wrote for Donald Trump Jr., Avenatti said it was a result of what happens "when your entire administration is built on a house of lies. I mean, lying is the rule rather than the exception with this administration. And when you can't keep your lies straight, this is what happens, period."

The Mooch, by contrast, tried to use the tactic of "everyone does it" to dismiss the lying problem at the White House. Colbert explained, however, that politicians might lie, but those lies have consequences, regardless of the politician and Trump should suffer those consequences.