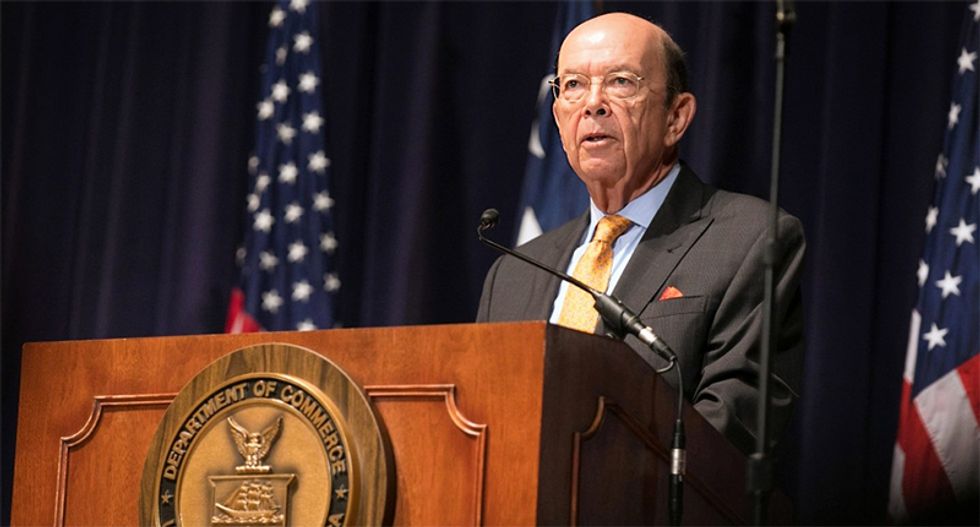 Fox News host Steve Hilton had an epic take-down of Commerce Secretary Wilbur Ross for investments he questions are actually beneficial for the American people that contradicts President Donald Trump's own policies.

While conflicts of interest rules don't explicitly outline requirements for the president of the United States, it does for members of the president's cabinet. Wilbur Ross may to have violated those rules, Hilton explained Sunday.

Hilton explained that he's supportive of bringing business sector experts into the government but that Ross is in a league of his own.

"The American people also want to know that when business leaders serve in government they're representing the interest of all American business and not just their own business," Hilton explained, noting it was part of Trump's "drain the swamp" agenda.

"What we found will shock you," Hilton said of the information they uncovered on Ross.

While Trump touts a pro-American trade agenda on steel, Ross stands to profit off of exactly that. Ross has a long history with steel, purchasing a company with just a $3 million personal investment just weeks before former President George W. Bush issued his own tariffs on steel imports. When he sold the company less than three years later, he scored a $4.5 billion deal. It became the world's largest steel producer and Ross sat on the board of the company until he joined the cabinet.

Next came Nautical Bulk Holdings, a shipping company based in Bermuda. Last November it became known that Ross did not disclose the Russia-tied ship business.

"One shipping company is in a partnership with Russia, and another that the U.S. Commerce secretary partially owned is tied to China's largest sovereign wealth fund," reported American Public Media.

Since May 2016 62 percent of their shipments to the United States has included steel from South Korea, one of the countries exempt from steel tariffs.

"The fate of that exemption is now in the hands of our Commerce Secretary Wilbur Ross, who is negotiating these tariffs" Hilton explained. "Guess who co-founded the shipping firm bringing steel here from South Korea through Nautical Bulk Holdings and remains an owner? It's kind of unbelievable, even regular viewers of 'Swamp Watch,' but the answer is Wilbur Ross. He's negotiating over South Korean steel imports while making money from importing South Korean steel."

To make matters worse, Hilton said that Ross' chief of staff at the Commerce Department is still listed as a director of Nautical Bulk Shipping, despite saying she had resigned from the company.

The company isn't the only shipping company he's invested in either. Navigator Holdings is an oil and gas shipping firm with international clients including a major oil company in Turkey, a company being considered for economic sanctions, Hilton said. Ross said he would divest from the company eight months after joining the administration. There's no evidence he actually has.

There's no evidence he's divested from his investment company WL Ross and Company, which co-founded and also owns another shipping company, the Transportation Recovery Fund, which specializes in auto parts, which Trump has said he intends to issue a tariff on. Diamond Shipping is one of the largest owners of medium-range tankers, is partially owned by Ross and his firms and once served as the chair of the company. The clients of the company include Lukoil and Novatek, two Russia-based energy companies. Another is GAZPROM, a Russian-state-owned gas giant and PetroChina, owned by the Chinese government.

"The brutal Communist dictatorship in Beijing may be planning world domination but, hey, let's not let that stop America Commerce Secretary from doing business with them while in office," Hilton said. "Wow! Talk about globalism."

He went on, citing Ross' company's dealings with a Venezuelan-state-owned oil company as well.

"Will Wilbur Ross tell President Trump about these conflicts?" Hilton asked. "Does the president know that the man negotiating tariffs designed to protect American workers from foreign imports is taking money from shipping those imports to America? It is truly astonishing."

"He's letting the president down," Hilton closed a panel discussion in the second half of the segment.

A Commerce Department spokesperson gave Raw Story the following statement: "Secretary Ross continues to follow the guidance of the Office of Government Ethics and Department of Commerce ethics officials to ensure compliance with federal regulations. Much of this report is based on half-truths and assumptions that frankly do not make much sense. Secretary Ross has fully divested in accordance with his ethics agreement filed with the Office of Government Ethics. For the assets the Secretary owns, ethics officials have not found Section 232 investigations or general trade negotiations to have a direct and predictable effect on those assets which is the legal standard. The Secretary will continue to implement the President’s bold trade agenda focused on righting the wrongs committed against American workers as well as our national security under previous administrations."